“Wildcrafting” It’s as primitive as it sounds. Wildcrafting is the action of gathering herbs, plants and fungi from the wild. It’s hunting in the dimly lit woods and combing through the hallways of trees instead of shuffling the concrete floors and fluorescent-lit aisles of supermarkets. It’s gathering golden treasures from the mossy forest floor while actively revolting against the convenience and disconnection of the industrialized food preparation industry.

But there is also an innate joy in obtaining food from places where the organic edibles are perfectly imperfect. Real food speckled with dirt, damp from rain, and in varying shapes and sizes. When gathering wild mushrooms in particular—for food or medicine—there is also a sense of something magical, as if these fresh, natural fungi sprouting from the earth hold immeasurable, beneficial qualities. Specialty mushrooms have recently been showing up on the menus of fancy restaurants, on the shelves at health food stores, in abundance in the forests we call our backyards, and ultimately, onto our plates.

Beyond nourishment however, various Asian cultures have recognized the potential medicinal qualities of mushrooms for tens of thousands of years. And North American culture is beginning to pay attention.

Talking Science with Jeff Chilton, the Mushroom Guru of the West
“Mushrooms are one of the first nutraceuticals,” says Jeff Chilton, author and pioneer in the North American medicinal mushroom industry. “They are food as medicine.”

With over 35 years working with and studying mushrooms around the world, Chilton runs research to scientifically analyze the active compounds of mushroom extracts. He says quantifying their healing powers is based on measuring beta-D-glucans, a type of polysaccharide [a sugar-based carbohydrate].

Scientific research has demonstrated that certain mushroom species contain beta-glucans that inhibit the growth of specific tumours in in vivo and in vitro testing. But, according to Chilton, it’s not so much that the mushrooms destroy tumours by themselves, but rather that, as adaptogens, continued use can actually help balance and harmonize the body’s natural systems of defense, including the immune system.

Chilton also reports that research contained in the “classic” book The Biology and Cultivation of Edible Mushrooms found that, on average, dried mushrooms contain 10% water, all of the essential amino acids, 9–44% crude protein, 2–8% fat (mostly in the form of linoleic acid, one of two essential fatty acid required in the human diet), 3–28% carbohydrates, 3–32% fibre, and approximately 10% minerals. The book also lists mushrooms as good sources of several vitamins including thiamine, riboflavin, niacin and biotin.

Medicine for the Grey Days
Unlike plants, mushrooms don’t contain chlorophyll and therefore don’t need sunlight to grow, taking their energy directly from the growing medium instead. Coincidence or not, they thrive in geographical areas with diminished hours of sunlight in winter months, like the Pacific Northwest. While some believe vitamin D supplements are essential to survive the dark Coast Mountains winters, Jeff Chilton is researching the idea that mushrooms could serve as strong vitamin D sources, thanks to a vitamin D precursor called ergosterol.

“Pro-vitamin D is present in all mushrooms and is converted to vitamin D by ultraviolet irradiation, including sunlight.” Chilton says. “And, in the products we’re working on right now, one gram of mushroom powder that’s been exposed to a UV lamp can provide 5,000 IUs of vitamin D. One gram, two 500 milligram capsules.”

Know Before You Pick
“Which isn’t to say there aren’t still poisonous mushrooms out there, and lots of them. It’s best to team up with a fellow forager who knows what to look for.” Chilton reiterates, “When wildcrafting (picking mushrooms in the wild), do not eat any mushrooms unless you’re absolutely positive about the identification from someone who really knows what they’re doing.”

Known as “the poor man’s meat” back in the day, wild and specialty mushrooms can be tasty, healthy, and way more fun to harvest than any stroll down the supermarket aisle.

QUESTIONS TO ASK BEFORE YOU BUY YOUR MUSHROOM SUPPLEMENTS

EDUCATE YOURSELF
Here are some resources to get your wildcrafting mushroom adventures started.

Whistler Naturalists They hold a foraging course annually during their Fungus Among Us Mushroom Festival. whistlernaturalists.ca

The Northern Bushcraft Guide This guide provides a list of edible mushrooms throughout British Columbia or you can buy Tom Cervenka’s book Wild Edible Mushrooms of British Columbia at Armchair Books in Whistler Village.

NAMMEX (North American Medicinal Mushroom Extracts) Check out Jeff Chilton’s website for more education on everything mushrooms and learn how to ensure any mushroom supplements you buy contain the medicinal components they advertise. nammex.com 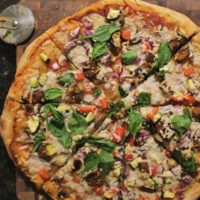 FOOD: HOW TO EAT PLANTS — 6 STEPS TO SPRING-CLEAN YOUR DIET
Spring in the mountains. A time of choice (ski gear or bike gear?) and of lessening the load (swapping the long undies for banana hammocks), but what about our food? It gets easier to sustain ourselves with lighter meals once the warmer temperatures kick in, but spring is also the perfect time for a shift in perspective with the way that we eat. There are good reasons to cut down on our meat consumption, or ditch it entirely and move to a plant-based diet… Read more