There’s an old saying about legendary fields of play: If you build it, they will come. As I rode up the slopes at Orchard in a Prinoth snowgroomer with Lucas Ouellette of Arena Snow Parks in mid-December, I could see it in his eyes—the excitement, the promise, the potential. Ouellette has one of the coolest jobs around. As a builder for Arena Snow Parks, he travels to different resorts, moulding the snow and working the terrain to build a playground that will become the social hub of the skiing and riding community.

As we drove around the slopes, Ouellette explained his vision for the new Badlands Terrain Park, a longstanding Blue Mountain tradition that’s found a new home this season under the Orchard chair at south. Ouellette explains his vision with a wave of his hand—a set of rollers here, a bigger jump line there, a rail section on this side, the Grove terrain park at the bottom. It’s a layout that will have riders flexing their creativity, using the whole run and, ultimately, having fun. “There’s been some creativity lacking in Ontario terrain parks in recent years,” explains Ouellette. “I’m hoping to change that.”

By the time you read this story, the new Badlands Terrain Park will already be open. Maybe you’ve already put in some runs there, worked on some new tricks, made some new friends, filmed some videos, taken some bails and shared some laughs. If you haven’t yet, there are two locals we guarantee already have: Lucas Eastmure and Tye Wilson. We caught up with Eastmure (two planks) and Wilson (one plank) to find out what Badlands means to them. 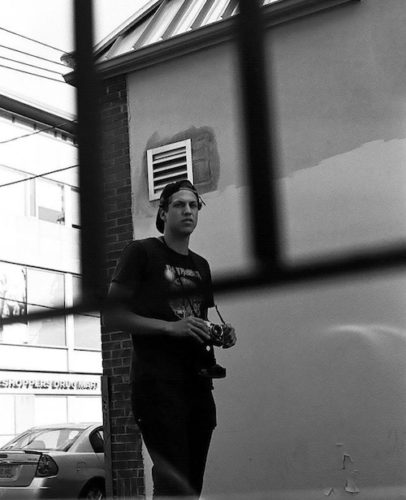 Tell us about yourself.
I’m 21 years old, from Huntsville, Ontario. I started my ski career at the ripe age of two. When I turned 16, I decided to make the switch from ski racing to park skiing.

Do you compete?
I used to compete in park and pipe through Freestyle Skiing Ontario. It opened a lot of doors for me and allowed me to meet like-minded people. Heck, I’d even go as far as to call these people my friends.

How much time do you spend in the Blue Mountain park during a season?
This will be my sixth season skiing park at Blue. I generally spend all my time in the park, or on my way to the park. I hope none of the people who taught me how to tune my skis are reading this…

What does the Blue park offer that helps you compete and improve your riding?
The park staff does a really great job with making features that you won’t see anywhere else. It prompts people to think about the way they ski or snowboard in different terms, and offers a creative challenge.

What do you most want to see in this year’s new park?
I’m pretty biased towards lots of rail lines in a park. The park staff at Blue Mountain always accentuates the strengths in whatever terrain they’re given. I’m really excited to see what happens at the new location.

The park is equally populated with skiers and snowboarders. Does everyone get along?
I see the snowboard/ski dynamic as something that is mutually beneficial. I definitely owe credit to all the snowboard parts I’ve watched. 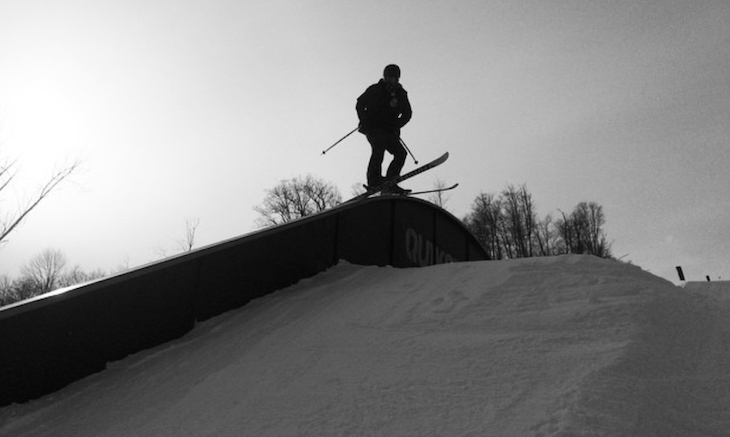 Can you give us a dummies’ guide to Newschoolers?
Newschool skiing is kind of an umbrella term that encompasses everything that skiers do in the terrain park: competitions, film making, half-pipe, jumps, and rails. I think, at its core, the newschool wave emphasizes self-expression and individuality. If I were looking to learn more about newschool skiing, I would want to visit the aptly named website newschoolers.com.

What are some of your goals for 2018?
I like making a video part every year. It’s a nice index of what you’ve accomplished in a season. The video-part format is an easy way to wear your influences on your sleeve.

Tell us about yourself.
I’m from Milton, Ontario but currently live in Collingwood. I’m 17 years old and I’ve been riding since I was around six. I learned at a small resort in Milton called Glen Eden.

Do you compete?
Yes: mostly rail jams and slopestyle.

How much time do you spend in the Blue Mountain park during a season?
In the winter I usually spend about six days a week at Blue. I work as park staff for Blue so I’m always there, whether I’m riding or not. I’m the kind of person who can’t sit still and needs to be doing something all the time. Blue is my happy place when I feel like I need to do something. I moved to Collingwood about four and a half years ago and I’ve been riding there ever since. I came to Blue once for Family Day, the year before we moved, and my family and I instantly fell in love. 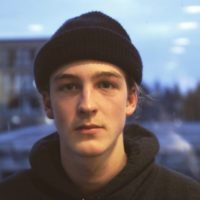 What does the Blue park offer that helps you compete and improve your riding?
I’ve found that Blue has a lot of quality, technical features that you really need to think about before you hit them. It also has a very positive vibe that comes with it, along with a ton of very talented riders that motivate each other. The mix of the park and the people, and getting to ride it almost every day really helps me learn new tricks and improve my consistency for competitions and improve the quality for the videos my buddies and I put out.

What do you most want to see in this year’s new park?
I would really like to see some more transition features, more snow made features like bowls and hips and rollers—some real Holy Bowly–type features. They don’t take as much skill as they do creativity and that’s what I love. You could take a handful of people and tell them to do a trick on a Holy Bowly feature and every one of those people will do a different trick because they all have a different sense of creativity and they all see the feature differently than the person next to them. It’s a new experience for everyone. There may be new challenges but there also may be more opportunities to build different things.

The park is equally populated with skiers and snowboarders. Does everyone get along?
I think everyone gets along just fine. Of course, you’re always going to find a little bit of a beef between skiers and snowboarders but for the most part everyone gets along. Often ski tricks blend into snowboarding and vice versa when we ride together. I have a lot of respect for skiers. I’ve tried it before and I can’t even imagine spinning off a jump let alone onto a rail. Especially with your skis on different feet giving you the ability to break your knees. You guys are crazy! Much respect!

What are some of your goals for the 2017/18 season?
My goals for this season would be to push my comfort zone and try tricks I would normally be hesitant to try. I’m also planning on filming with a few new people. Some friends and I started a little crew called Karma (@karmasnow) and we post edits every year. It’s awesome to see the quality of the videos increase as our skills increase and our style develops. We hope to put out as many videos as we can and possibly a little movie by the end of the year. I am hoping to get more street footage as well.

Anyone you want to thank?
Shout out to my buddy Angus Thomson for filming and pushing me to try harder every time we ride together and a shout out to all the homies for keeping the morale up and keeping snowboarding a fun and entertaining thing to do when it becomes stale. Shout out to Blue Mountain for making my snowboarding dreams come true. Shout out to all the people who have given me the amazing opportunities to snowboard, progress and become more well-known whether it be sponsors, film partners, announcers, friends and most importantly my parents. My parents are the most supportive people I know and I’m insanely lucky to be in the position I am.