It feels like trespassing. Maybe because it is trespassing. We’re in the Bachelor’s kitchen and it’s a mess—upturned boxes, piles of letters and files, clothing, shoes, appliances in unruly piles. The schoolhouse-turned-home is abandoned, and was never cleaned out after its resident died 10 years ago. We may be trespassing, but the house is not posted with signs. The outer door is closed but not locked, and all the windows, save a quarter-pane in the basement, are intact, as is the roof and structure generally. The interior is disordered and musty and the ceiling caved in, disgorging plaster and insulation—but beyond that, it’s as if the Bachelor went away for the weekend, never to return.

I call him “Bachelor” because he was clearly single and because I won’t give you his name, to protect his family’s privacy. I’m in the schoolhouse at an undisclosed location with photographer Keita Inoue, whose work focuses on abandoned spaces—but this house is a bonus. Unlike many of the structures he shoots, it is easily accessed, and it’s full of photogenic material. There’s a story lying in this scattered profusion of papers, photos, postcards, clothes, mementoes and bric-a-brac, if it could be reliably told. Because it can’t, we’ll rely on Inoue’s photography to pick out the richest clues and arrive at a kind of open-ended, endlessly evocative narrative of a life in fragments.

Keita Inoue’s exhibit Afterimage is showing at The Press Gallery (65 Simcoe Street) in Collingwood until January 14 and is coming to Meaford Hall in June 2018. See more of Inoue’s work at leftahead.ca 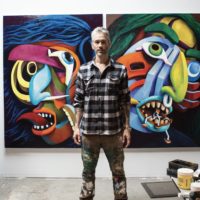 ARTIST PROFILE: SHAWN HUNT, SHAPESHIFTER
Like his life, Shawn Hunt’s art is a study in contrasts. Country life versus city living, mountains versus ocean, carvings versus paintings, simplicity versus complexity, traditional versus contemporary and family versus self. However, it’s never been about “versus” as conflict. For Hunt, a Heiltsuk artist born and raised on the Sunshine Coast, the juxtaposition has been about creating art that resonates beyond the sum of its opposite components. And his family roots have always led the way… Read more