With a vertical rise of just 386 metres, Whistler’s Orange Chair carried guests (two at a time) on a ten-minute journey from the top of the old Creekside Gondola to the starting point of the Dave Murray Downhill run; a good ride in the right weather. 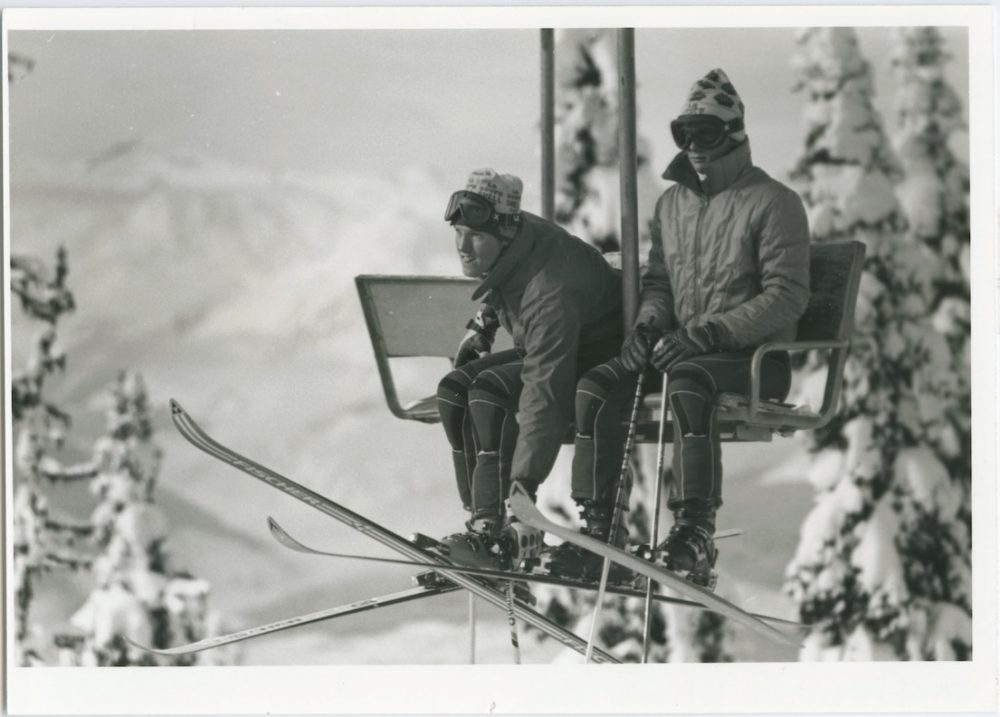 The orange-coloured “double” was installed in 1972 to increase Whistler Mountain’s uphill capacity and delivered skiers to the top of what was then known simply as the Downhill or Gondola Run. Over its almost four decades of operation, the Orange Chair carried many young (and not so young) ski racers up to train on the Downhill run, including Rob Boyd (pictured left) who loved riding the Orange Chair.

“It was great entertainment as you travelled up Goat’s Gully and then passed over Double Trouble en route to the top of the DH run,” he remembers fondly. Boyd has ridden the Orange Chair far too many times to identify the specific ride in this photo. “We must have been training GS on Upper Dave Murray since we don’t have helmets or speed suits on.”

The orange-coloured “double” was installed in 1972 to increase Whistler Mountain’s uphill capacity and delivered skiers to the top of what was then known simply as the Downhill or Gondola Run. Over its almost four decades of operation, the Orange Chair carried many young (and not so young) ski racers up to train on the Downhill run.

The Boyd family moved to Whistler from Vernon in 1982, when Rob was 16. In the same year, he qualified for the BC Team and three years later Boyd was training with the Canadian National Development Team. In February 1989, just a few years after this photo, Boyd became the first Canadian male to win a World Cup Downhill on Canadian soil on the same run the Orange Chair ran up. Though it was not Boyd’s first World Cup gold medal, winning on home soil has certainly been a career highlight.

Whistler’s Downhill is made up of various sections, each with its own story. “Johnson’s Swamp” was named for Ron Johnson, a mountain worker who found this area particularly wet one spring morning. “Double Trouble”—one of the sections that gave such great entertainment to spectators—had two jumps, one right after the other. The section was later renamed Orange Cliffs, after the chair that ran above it. Whistler’s Weasel Workers got their name from “The Weasel,” a section that had to be flattened by foot before races.

In 1991, after the death of Dave Murray—former Crazy Canuck, director of skiing on Whistler Mountain, and founder of the Dave Murray Ski Camps—the entire downhill run on Whistler was renamed Dave Murray Downhill in his honour.

The Orange Chair continued to transport racers to the top of Upper Dave Murray until 2009. While no longer on the mountain, Orange Chairs can still be found throughout town as a reminder of Whistler’s past, and the legends that sped down the slopes we love. 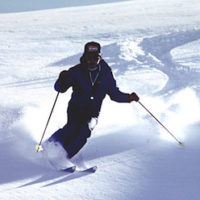 “Believe in the path you choose with your heart.” His motto was simple. Toshi Hamazaki arrived in Whistler in the fall of 1970 by a stroke of chance, a telephone call. “We are hand-picking the best ski instructors for our new resort called Whistler. Come join us.” That was all it took. Toshi had been instructing in Europe for five years but packed his bags for Canada… Read more