Like spindrift snow gusting through the cracks and crannies of too many dilapidated alpine shelters, the idea for a new backcountry hut design has been swirling around Wilson Edgar’s head for decades.

“I built a lot of forts as a kid,” Wilson says. “There were enough kids in my neighbourhood back in Ontario that we could build two-storey snow forts. So we did. In the summers, I’d be out paddling on the lakes or hiking and constantly looking at, and thinking about, cottages, cabins, forts and hideouts.”

In 1999, Wilson relocated to British Columbia, driving through the Rockies with Michael Leckie, an old neighbourhood friend on his way to architecture school in Vancouver. Two decades later, Edgar, now President of the British Columbia Mountaineering Club (BCMC), continued to fuel his daydreams of the perfect backcountry hut.

“The more time I spent exploring the wilderness, the more I saw a need for a backcountry hut that’s easier to build and customizable for the space it inhabits,” he says. After working with a team of volunteers on the construction of the BCMC’s Water Sprite Lake shelter near Squamish, Wilson was inspired to finally pull the trigger on his recurring dream of totally redesigning the idea of a recreational shelter. And he knew exactly who to call first.

“Mike Leckie had become this incredible architect,” he says, “but he’s also a surfer who has spent the last couple decades exploring the west coast from Haida Gwaii to the Baja. So, twenty years after we drove out, I came to him and he instantly wanted to participate.”

After about six months of design and collaboration on the idea of a modular, customizable and easy-to-assemble backcountry shelter, the Backcountry Hut Company (BHC) became official. And Michael’s final design immediately earned a 2016 Canadian Architect Awards Award of Merit. The problem with many backcountry huts, Wilson explains, is that builders too-often try to transpose traditional building methods and materials into hard to access or environmentally sensitive areas. Wilson and Michael’s concept is a modular approach similar to what IKEA did for furniture (albeit with more in-depth instructions). 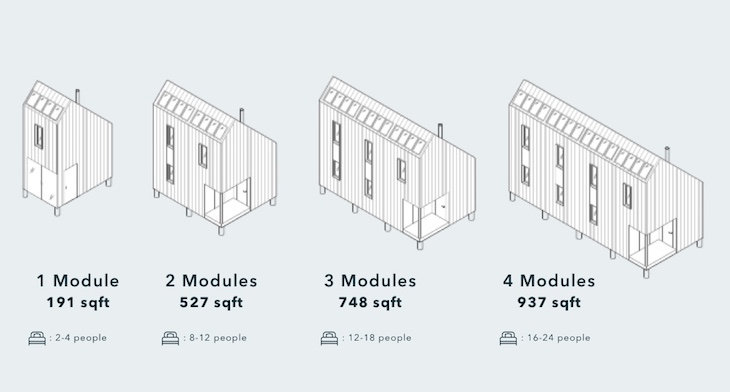 “The hut is modular and prefabricated,” Wilson explains. “It’s delivered on custom pallets, flat-packed with an instruction manual. There is no cutting or lining things up, that is all done by us. Whoever is going to assemble it starts with part one, adds it to part two, and goes on from there. It’s almost like Lego. We want to empower the average individual to become a more engaged participant in the construction process.”

The BHC base hut module is 191 square feet — 16’ x 10’ by 25’ high —with a loft sleeping area for two to four people, but depending on the size of shelter required, builders can simply add modules. Four modules create a 937-square-foot structure that sleeps 16–24. Regardless of size, for backcountry use the shelters are designed to sit on hand-poured pilings rather than a solid concrete foundation. This makes for a much easier assembly in areas accessible only by heli or hiking.

Working with Swiss-born Cyrill Werlen of Comox-based cascadianwoodtech—who Wilson calls the perfect fabrication partner for this design—the Backcountry Hut Company structures are built from materials carefully chosen for their durability in harsh environments. The goal was to craft a structure requiring minimal repairs, year over year.

“The whole system is designed with metal cladding which eliminates a lot of problems,” Edgars says. “In the mountains, a steep roof pitch and metal exterior means no snow on top and any weather that strikes the building will be repelled. We wanted to avoid any exterior exposure to wood so there’s no repainting or rot issues. But we also needed proper airflow. Some backcountry huts, you go in there and start drying all your gear and the moisture levels inside get high enough to create rot. We’ve seen that so we chose high-end materials, and even though our panels are sealed we get that airflow to allow moisture to leave the building.”

“The hut is modular and prefabricated,” Wilson explains. “It’s delivered on custom pallets, flat-packed with an instruction manual. There is no cutting or lining things up, that is all done by us. Whoever is going to assemble it starts with part one, adds it to part two, and goes on from there. It’s almost like Lego. We want to empower the average individual to become a more engaged participant in the construction process.”

Materials were sourced as locally as possible, with most manufactured in Canada or the US. The wood for the main structure is glue-laminated Douglas fir. “Glulam doesn’t absorb moisture and we aren’t using huge pieces of wood harvested from old-growth,” Wilson explains. “We do get our skylights from VELUX [in Denmark], but natural light was such an important part of the design. If the building is situated properly, the natural solar angle will cast light down the long ceiling wall and heat up to create airflow, which will push warm air down into the hut. In the summer, with one skylight and the main floor window open, you can pull cool air from the lower level and the heat will escape. We wanted everything to have a natural and fresh air feel.”

Predictably, the design has attracted attention from well beyond the alpine. Wilson says many of their first customers are buying BHC shelters to use as lake cottages, hunting cabins and even primary structures on residential properties.

“For the backcountry, we designed it as a raw shell,” he says. “In the frontcountry, people might want plumbing and electrical, so we will prefabricate it to what they want, offer suggestions and recommendations, and provide the right plans for whatever level of permitting they need.”