“2.5 Million” follows American skier Aaron Rice as he sets out to ski 2.5 million human-powered vertical feet in the backcountry and set a new world record. To be successful Aaron will have to ski over 330 days in the calendar year and chase snow around the world. The challenge is both physical and mental, and injuries are simply not an option. 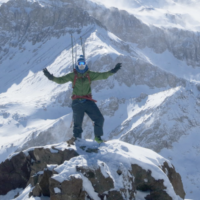 TURNS ALL YEAR: 120 CONSECUTIVE MONTHS OF SELF-PROPELLED BACKCOUNTRY
Every spring, the back and forth of “how many days on hill” echoes off the walls of chalets and local brew houses in nearly every mountain town across the northern hemisphere. But for a select few, it’s a never-ending season. For the past 10 years, Andy Traslin and his brother Mike have been embarking on a marathon of self-propelled ski touring adventures and, through sheer tenacity and a hint of sibling rivalry, managed to earn their turns in 120 consecutive months—that’s a stretch of nearly a decade for the arithmetically challenged… Read more