You can’t recycle broken skis. There are no composts for flexed-out snowboards with blown edges. And while more than a few ski bums have breathed an extra season or two of life into their gear with a roll of duct tape and some swallowed pride, the sad reality is, the gear responsible for much of our joy in the mountains too often ends up in a landfill—timeless symbols of a privileged, wasteful lifestyle.

“I think humanity is losing its perspective on its place in nature,” says Whistler resident Randi Kruse. “Mountain culture has its roots in environmental philosophy—we see the value of pristine nature—but with more than 3 million people visiting this valley each year, how many really learn or understand what makes this place special?”

“But no one has tackled the fact that we are throwing away three tonnes of used skis and snowboards each year,” she says. “That’s enough to fill a Peak 2 Peak gondola.”

And like an overloaded gondola, Kruse thinks that waste is hanging over all of us. Manufactured with a tightly packed combination of metal, plastic and fibreglass, skis and snowboards can’t really be recycled so, according to Kruse, they need to be repurposed.

“There is a limit to what our planet can handle,” she says, “but human ingenuity is limitless.” A few years ago, Kruse began envisioning new ways to use and enjoy trashed gear: a ski could be cut and used to create a firewood box or a wine holder, or to form an A-frame roof for a bird house. As the ideas kept coming, Ski Heaven was born—a ski/snowboard upcycling company celebrating mountain culture and helping to reduce our impact on the environment.

“Mountain culture has its roots in environmental philosophy—we see the value of pristine nature—but with more than 3 million people visiting this valley each year, how many really learn or understand what makes this place special?”

“I wanted to reinvent what mountain art looks like,” she says. “Skis and boards are physical reminders of our connection to this place, and to the memories made with people exploring the mountains together. I can’t just see that as garbage.”

“It was a tragic irony that something we use to access remote natural places would become an ecological burden,” Kruse states, adding that her handiwork is helping create a new mindset in the mountains, but admits her progress only leads to larger questions. “Who should be held accountable for the effects of climate change? Do consumers have a role to play? Should companies be required by law to develop new products with a cradle-to-cradle approach?”

The good news is, some outdoor companies already are. Long known for their efforts to reduce planetary harm and inspire environmental solutions, Patagonia introduced a Worn Wear program to buy back used Patagonia gear, clean it up and pass it along, keeping it out of landfills.

Originating in 2012 at various brick and mortar locations across the US, the Worn Wear concept expanded into an online store earlier this year. Patagonia also offers repair tips and videos on their website and operates a repair facility in Reno that fixes or recycles gear too damaged for Worn Wear upcycling.

Surefoot, the world’s largest supplier of custom ski boots, is tackling their waste issues in a different way. Their retail locations replace thousands of used boot liners each winter and, rather than send them to the landfill (each foam/plastic liner would take over 1,000 years to biodegrade naturally), the company got creative. Teaming with an upcycling/salvaging company called SAVEarth, Surefoot adds an affordable rubber outer shell to create a warm, waterproof boot they then ship to underdeveloped, cold weather countries like Nepal and Mongolia. It’s win-win.

Even closer to home, Whistler Blackcomb’s environmental track record recently inspired new owner, Vail Resorts to make an “Epic Promise” for a zero footprint by 2030. “The environment is our business, and we have a special obligation to protect it,” says Vail Resorts CEO, Rob Katz, in a press release. Part of the Epic Promise is for every Vail Resort to hit a 100 per cent waste diversion rate by 2030 and a 50 per cent benchmark by 2020.

The initiative couldn’t come at a better time, according to Kruse. “In nature, there is no waste,” she says. “It’s a closed loop. And the economy we humans have invented is anything but. The next economic revolution will come from us emulating nature’s time-tested strategies, and seeing these large companies acknowledging the problem is a huge step in the right direction.”

Kruse says we shouldn’t wait for corporations to save us however, it’s time for everyone to think about upcycling their used gear. “If you have old gear you’ve been holding on to, give me a call,” she says.

And if you want to start upcycling yourself, who couldn’t use a fresh shotski this winter? 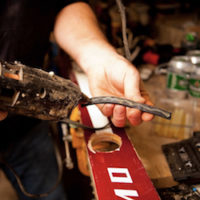 HOW TO BUILD A SHOTSKI IN FOUR EASY STEPS
While keg parties have keg-stands, frat houses have funnels, and bars of questionable repute have the body shot, nothing quite says “I love snow” like building a shotski. Passed down to us by our Austrian forefathers (who call it a schnappski), there is little arguing that the old country knows a thing or two about après… Read more 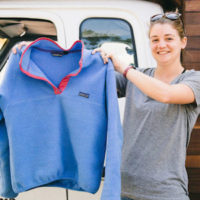 Patagonia continues to walk its talk of creating sustainable goods and business practices. After a recent campaign promoting its impressive Reno repair facility (to keep its gear in use and out of landfills), the Ventura-based brand has gone one step further by taking its Worn Wear Trade-in program online…. Read more