I had been to the Holy Stone a decade ago, travelling by snow machine with people who knew the country. At motorized speed, landmarks don’t imprint on your brain as well as they do when you are on foot. Now, skiing alone across the vast Siberian tundra, I couldn’t remember any waypoints. For all its spiritual significance to the Koryak people, the Holy Stone is merely a two-metre high volcanic obelisk, in a land of many rock outcrops, on a tundra that stretches nine time zones from east to west. With the sun dipping, the wind building, and tendrils of new snow scudding across the coast range, I dropped into a gully and dug a tent platform into a wind-hardened drift. 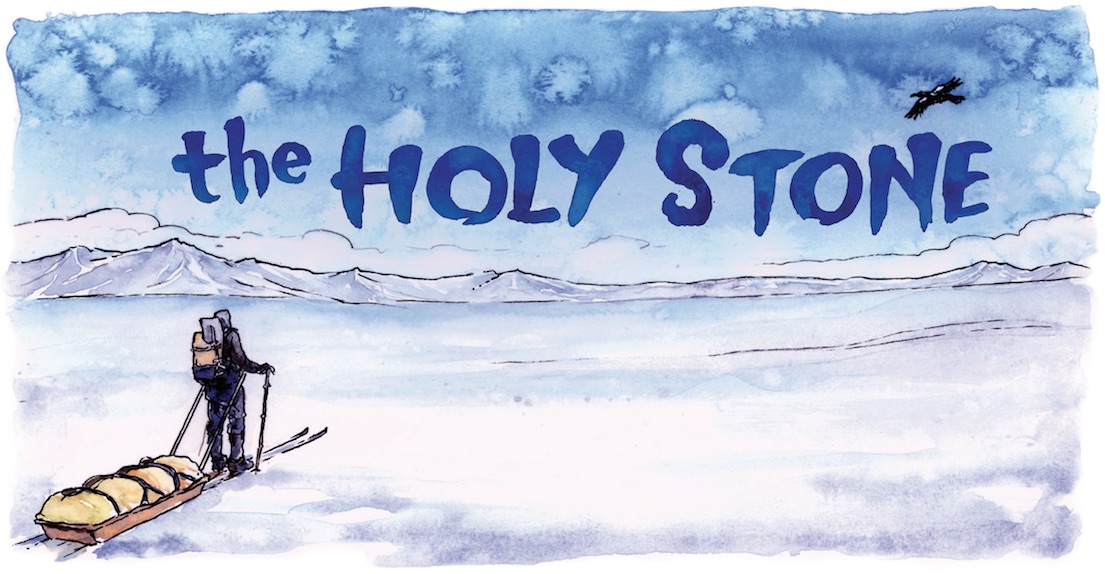 I normally enjoy the calmness of a solo journey, the self-reliance, the lack of words. But this time I was travelling by myself because Misha had just died. When we joined up in the Moscow airport a few weeks ago, I barely recognized him: weak, pale, and sickly. He survived the nine-hour flight to Kamchatka on sheer willpower and then celebrated our upcoming journey to the tundra with a hearty meal of vodka and pickled eggs. And then he simply vanished from this earth before we had time to say goodbye, if there can ever be a proper goodbye.

Misha and I had been brothers. The summer before our journey to the Holy Stone, we were camped on the Pacific coast of Siberia, on the “eastern edge of the eastern world,” resting after a long day in our kayaks. As Misha sipped his medicinal tea, he told me: “You have saved my life. The Wild Nature has saved my life. At home I was making too many papers. Each day, nothing but papers.

So, I had a hole in my stomach. Eating me. Bleeding. Killing me. And now we are paddling to Alaska with our own hands.” And he raised his hands to gaze in amazement at his calloused palms, such a fragile means of propulsion to carry us across an ocean. “And now, these herbs that the old woman gave me, and this ocean, and this Wild Nature, have saved me. I am no longer eating myself from the inside to the outside. Thank you, Jon. Labour and Defend.”

I had never thought that crossing the storm-tossed Arctic waters of the North Pacific in a kayak was a journey into safety, but for Misha it was salvation

I had never thought that crossing the storm-tossed Arctic waters of the North Pacific in a kayak was a journey into safety, but for Misha it was salvation. After paddling from Kamchatka to Alaska, Misha and I journeyed to the Holy Stone on this tundra, this valley at the centre of the Koryak universe, so we would never forget where the real healing power was.

And then he moved to Saint Petersburg. I cried, a hearty cleansing cry, the tears mingling with the falling snow. “How could you have forgotten?” I asked rhetorically.

After a few years in the city, Misha sent me an urgent email that we needed to return to the centre of the Earth. But by the time we arranged our travel plans, his ulcer had exploded and hemorrhaged, and when I met him in Moscow, it was too late.

Speaking about too late, I realized that I was dangerously cold, so I set up my tent, cooked dinner, and snuggled into my bag. The following morning, I climbed to a nearby hill to fix my bearings. Below was a broad river valley where one lifetime ago, when the old shaman, Moolynaut was a little girl, the Koryak tribes gathered every spring to rejoice in the return of the sun and the plant growth that would nourish their reindeer. I saw the Holy Stone out there, a speck of black in the vastness, alone, if a stone can be alone, with all\ the people gone to the villages and cities, and the tundra quiet except for the\ wind and the soft sound of falling snow: Without the deer, playing children,\ lovers courting, and elders telling their stories. Because within one lifetime,

Moolynaut’s lifetime, we have all moved away. I broke camp, paid homage to the Stone, and then headed into the mountains to ski fresh powder on some lines that were steep enough that it was stupid to ski them without a companion. But that was fine. Sanity wasn’t my friend right now.

Narrative is a new section where we publish essays, rants or letters written by past and future speakers of the Mountain Life MULTIPLICTY show, a multimedia storytelling event held each spring in Whistler. Jon Turk was the keynote speaker in 2017 and this article was taken, in part from his books, In the Wake of the Jomon and The Raven’s Gift, although the story of Misha’s death has never before been published. www.jonturk.net

MULTIPLICITY 2017: JON TURK ON ADVENTURING AND THE CONSCIOUSNESS REVOLUTION
Jon’s world-view was transformed by Moolynaut, a 96-year-old Siberian shaman. This journey is chronicled in Jon’s book, The Raven’s Gift. Jon’s newest book, Crocodiles and Ice: A Journey into Deep Wild represents “a continuing exploration of a consciousness revolution based on a deep, reciprocal communication with the earth.”… Read more