When Jeff Thomas was charged with anchoring Whistler Blackcomb‘s 2017/18 marketing campaign, he wanted to do something bold, something that hadn’t been attempted before. He kept glancing back at two underlined words scribbled on the page of his notebook: ski movie. Not just any ski movie, a full length ski and snowboard motion picture filmed entirely on Whistler Blackcomb terrain, all in one season.

“One drawback of all the great snow was not being able to film more big mountain footage. We had Ian McIntosh ready to shoot with us for just over three weeks in March, and during that we only got one day of sun. Lots of pow though.” – Co-Director, Jeff Thomas

The idea began to grow legs when Whistler agency Origin Design + Communications (where Thomas works as the director of video production) pitched WB the concept of “Magnetic,” giving name to an invisible but very real force that attracts skiers and snowboarders from all over the world to Whistler. Magnetic Movie was to be a visual distillation of that concept.

But such a proposition was not without risk. Being bound to the weather and snow conditions of one location for an entire film project would be enough to make any director shake in their ski boots.

“In order for a film like this to happen, you need athletes to buy into it. If they didn’t commit their time, we wouldn’t get the footage we needed. One of the risks was over-promising who was going to be in the movie. We had a list of 55 Whistler Blackcomb athletes we wanted to engage, which by the end, we did. That’s testament to the depth and commitment of our skiing and riding community in Whistler.” – Co-director, Jeff Thomas

“I built a lot of contingency plans on paper – and in my own head – that no one really knew about,” says Thomas, who produced and co-directed the film. “With the high snowfall and low temperatures that we got, the season was so exceptional that those contingencies evolved into other segment ideas.”

Winter 2016/17 helpfully delivered consistent double-overhead powder conditions, but even that did not guarantee the movie would be a slam dunk. Thomas was relying on dozens of busy athletes to commit a significant chunk of their season to filming.

“It was pitch black, -25 degrees and snowing heavily, but we were somehow able to operate our camera rigs and drones despite conditions. The athletes were absolutely killing it that night. Somehow it all worked out perfectly, likely due to Jeff (Thomas) having a sixth sense on how to best set up the lighting.” – Co-director, Darren Rayner

Whistler Blackcomb had to be comfortable handing the creative reins over to a trio of external film directors (Thomas teamed up with snowsports film veterans Graeme Meiklejohn and Darren Rayner), knowing full well the goal was to push the envelope of what local athletes are capable of.

“We shot everything that night in one three-hour session. It was overcast so there was zero light up there, the athletes were basically skiing by feel. They had headlamps on and could see the lip of the jump, but that was about it.” – Photographer, John Entwistle

“We were working so closely with (WB) Ski Patrol and Mountain Safety that after a while, we just learned to trust one another,” says Thomas. “They allowed us to get the footage we needed and we showed them that we could do it safely and responsibly.”

In the end, the risk paid off. Part of the success was luck with the weather, but the real magic of Magnetic was how Whistler’s community of professional skiers and snowboarders rallied to the cause.

“To stand out these days, you have to do something big,” says Thomas. “I think we managed that [with Magnetic Movie] by not taking ourselves too seriously but at the same time, showing that skiing in Whistler is seriously fun.” 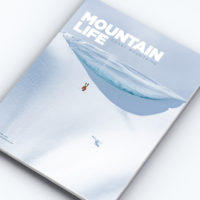 New Coast Mountains Issue Available Now
Here we go, the first Coast Mountains issue of the winter. No theme for this one, it’s just 146 pages of high-flying good times that kick in with a spread eagle crotch grab and a double disc soundtrack by Bone Thugs-N-Harmony. Hello winter, come on in, we’re partying… Read more