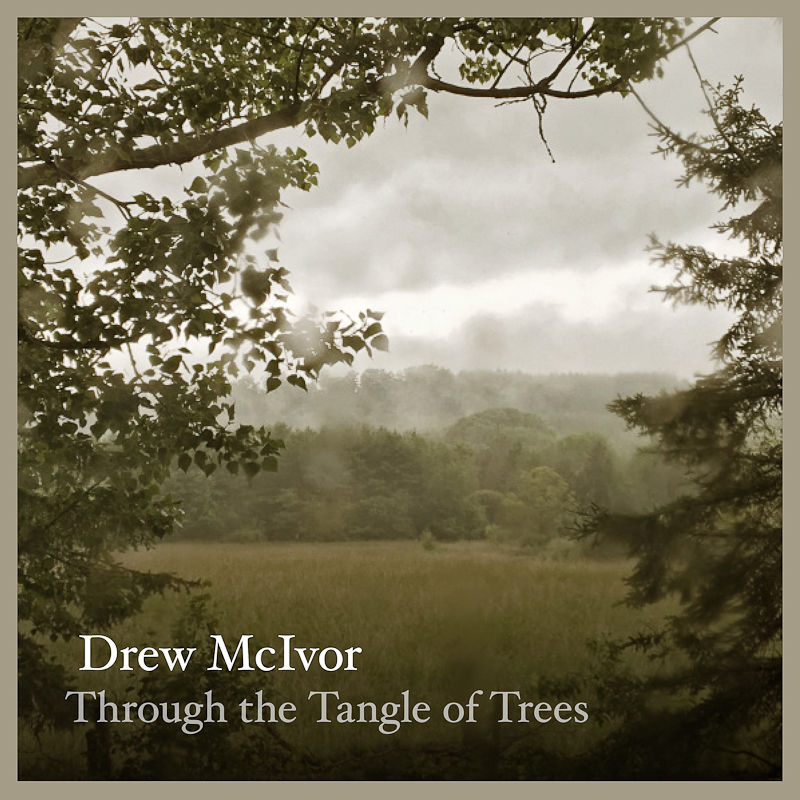 Drew McIvor’s second solo album, Through the Tangle of Trees, exudes a handmade, pastoral feel from the first notes of the first track, “Heart in a Bag”, with its muted percussion, acoustic guitar and stacked vocals. My knee-jerk comparison was to early Paul McCartney solo albums and their tendency to forgo band arrangements in favour of a solo folk-pop sound emphasizing vocal melodies and spare acoustic-guitar harmonies.

But halfway through “Heart in a Bag”, a trumpet-led bridge (played by Marie Goudy) underlain by a bed of electric guitar broadens the palette and sets the tone for the album. Songs that begin as hummable ditties soon move into complex territory, without losing the intimacy and tuneful confidence they began with. Romantic uncertainty is a baseline theme here but is articulated through songcraft as part of a process that leads to a more refined understanding.

Several tracks expand the album’s tapestry further: “You and Me and You” offers up a convincingly elastic-legged New Orleans “second line” style; “Intoxicated” with its Mellotron intro, treated vocals, and melancholic minor keys recalls certain 1967 Beatles tracks but with a troubled narrative (“My head’s an echo chamber filled with devil’s laughter”) all its own; and the joyous “Stars” nails a rocksteady rhythm so convincingly it wouldn’t be out of place on a Studio One compilation.

Various musicians step up to filigree the songs throughout. For example, the brain-opening pedal-steel solo on swinging rocker “Good Company” by album co-producer (with McIvor) Craig Smith; Jayden Grahlman’s fingerpicked solos on “Marmora Blue” and “Flow”; and the aforementioned Marie Goudy on trumpet, who adds depth and nuance to several tracks.

Drew McIvor’s first solo album, 2014’s Porchlight, was a virtuoso variety pack of boogaloo, southern soul and other genres. Through the Tangle of Trees foundations McIvor’s influences more solidly in a bed of melodic pop invention.

Buy or stream Through the Tangle of Trees at DrewMcIvor.com.