Namuli is a community-backed film about the spirit of exploration and what happens when a team of rock climbers, biologists, and conservationists sets off on an unconventional expedition into one of the world’s least explored and most threatened habitats. The film follows an international crew as they push the bounds of friendship, climbing conventions, and scientific research on the 2,000-foot granite face of Mozambique’s second highest mountain, Mount Namuli. 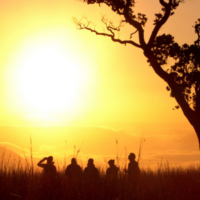 THE FAR SIDE: CLIMBING AN UNKNOWN MOUNTAIN IN THE NAME OF BIODIVERSITY
Mount Namuli is unlikely to be notched on any mountaineer’s bedpost. As mountains go, it isn’t extremely high or steep. The 2,419-metre granite monolith in northern Mozambique can’t even boast an iconic horizon line like Argentina’s Fitz Roy or Switzerland’s Matterhorn. If anything it calls to mind an ancient fortress looming above the surrounding rainforest and grassland, its lopsided summit often obscured by clouds… Read more