Let me be frank. I’m not the semi-pro athlete you’d expect to be penning a story about his experiences deep in the powdered peaks of the Canadian Rockies. I’m far from the thickly bearded, first-ascenting, Krakauer-esque regaler of epic tales of deep and steep face shots from what many had warned me would be the cat trip to ruin all subsequent cat trips.

I’m average. Average enough on the slopes that the idea of visiting the Shangri-La of snowcat ops strikes me with anxiety. Can I keep up? Can I measure up? Will I ruin the experience of other guests by getting stuck in a gully, neck deep and flailing to excavate myself?

I was born in the prairies and spent my formative years riding the big Blues of southern Ontario. Am I really ready for this? There’s now talk of me tagging along with pro skiers Nick McNutt and Rob Heule for the week, so there’s that, too.

My imagination runs wild (what I lack in prowess on the hill, I make up for in this area) with scenes of rope rescues and helicopter evacs (and the sullen faces of my newfound cork-crazed companions as they look on with disappointment, or worse, ridicule). I chronically waver from being in shape and being a pile and, well, I’m just like many of you fine readers—a run-of-the-mill adventurer who’s just trying to stay out of the news.

So as I stand in the parking lot, waiting to board a cat up to Island Lake Lodge, I try my best to look the part—cooly searching for a sense of what’s going on, what’s coming next and what it’s going take to not embarrass myself in the coming days.

As the first cat appears, dusk envelops the now pink-hued peaks of the towering Lizard Range above us. Of course I nab shotgun, using the opportunity to bombard the driver with all the questions you’d expect from a slightly neurotic, abundantly over-excited outdoor journalist: What’s it like working here? Do you get to ski every day? You get to ski every day, don’t you? I hear the food’s good. Is it good? (It’s unbelievably good: five-star good.) How long have you been doing this?

“Been in the area 25 years,” Marcelin says with his native Quebecois patois. “Hitchhiked all the way out here, with my skis. Been here ever since.” Nearly every employee I assault with my inane questioning over the coming days echoes this same theme: it’s a place so perfect, it’s impossible to leave.

We chug up the mountainside, following a route traced by what look like blue ribbon trout streams snaking through an army of icing-sugared, oldgrowth cedar. Marce (as he tells me most people call him) goes into detail about the minty new, nearly silent cats the lodge has just acquired, pointing out all the frills and comfort features. I nod in appreciation, like I would know the difference.

Though Island Lake Lodge sits only a few kilometres from the charming, former mining boomtown of Fernie, British Columbia, and only a few hours from Calgary, Alberta, its home in the Cedar Valley has distinct environmental characteristics—uniquely conducive to abnormally large amounts of snowfall, even by the high standards of the Rockies.

The valley is blessed by a microclimate created by east-west and north-south valleys intersecting to funnel precipitation across a myriad of aspects. The result is a relentless dumping of high quality snow on an endless plethora of features.

Marce pulls over and coaxes me to get out and take a look at the moonlit valley. I make my first of what would become many exits from the cat, gingerly stepping onto the tread, playing the audio reel from Neil Armstrong’s lunar landing in my head. With zero forethought I take one small step into thigh deep snow that buries the lower half of my body in a swift gulp.

“Watch your step,” he says.

“Yep, got it, all good.” I’m already embarrassing myself.

“No shit,” I mumble, comically fumbling to resurface.

The cat pulls into the station, I say my farewells to Marce as he leaves to ferry our gear to the cabin, and then I take a minute to survey the triad of rough-hewn log cabins glowing warmly in the crisp night air.

Touching the centuries-old timber, I feel an overwhelming rush of nostalgia. Like I’m part of something bigger than what can be felt and seen on the surface.

“Hi, Mr. Peech. How was your drive from the coast?” the pleasant woman behind the counter greets me, clearly having done her homework. A large, extended family gaggles in behind me. The lodge’s top dog greets them all by name, like old friends.

“We’ve been coming back every year for I don’t know how long,” the patriarch says to me after I make some face-in-palm comment about a bar where everybody knows your name.

I quickly do the math and come to a hasty conclusion: fat cats—I knew I’d be surrounded by fat cats this week. But as I shake my hand through a line of introductions, I discover this troupe is just like me: seemingly average folk from average walks of life and modest incomes. A true testament to the addictive allure of Island Lake, these people save and sacrifice throughout the entire year for three days of incredible skiing. It isn’t until I take my first turns the following day that this makes any sense at all to me.

If it’s not the terrain or snow quality that brings guests back year after year, it’s the whole bespoke experience (the masseuse actually knew my left leg needed more work than my right because of my riding stance, and that I fly fish. “You need to come back in the fall,” she says. “It’s like nothing you’ve ever experienced.”).

Yes, Island Lake is luxe. That’s its brand. But no, it’s not stuffy. It has that je ne sais quoi that makes one feel comfortable, soothed and relaxed—at home, like the ultimate B&B. For the brief few days I spend here, I never once feel like I’m out of my league.

Finally taking a seat by the giant stone fireplace after a long journey, I tilt a pint towards the snapping embers, my anxieties now distant memories as I’m overcome with a sense of awe. I imagine Terje Haakonsen (still wearing his goggles in the lodge after a day in the field) and Craig Kelly (recently leaving the contest circuit to find solace in these very mountains) exchanging fireside tales of first descents. I look around the room and picture Scot Schmidt and Eric Pehota discussing the day’s filming session over a game of pool, tipping back beers and nachos, encapsulating everything après should be.

I begin to wonder if the authenticity and unpretentious vibe of this captivating place has anything to do with its storied history. It’s not that Island Lake Lodge invented cat skiing; it just defined it.

Likely due to its proximity to major resorts and character towns dotting the BC interior’s Powder Highway—the ease of access to a smorgasbord of terrain and untracked alpine—Island Lake has attracted legions of snow sports icons since the early nineties to film the segments that make up the rich tapestry of our history. Then again, maybe it’s just serendipity.

Films like Blizzard of Aahhhs, Steep & Deep and P-Tex, Lies & Duct Tape—not to mention the dozens of magazine covers and feature interviews shot on location—not only put Island Lake on the map, but also kickstarted a collective salivation for big mountain, off-piste and backcountry experiences among average, everyday enthusiasts.

The area’s recreational history stretches back to the early 1900s, when locals from Fernie built a small day-use cabin on the property. But it wouldn’t be until the early eighties when Dan McDonald and Rod Pendlebury brewed up the idea of ski touring and cross-country skiing around Island Lake and the Lizard Range.

Then in 1988, with foresight from veteran lensman Mark Gallup, who saw the potential of catskiing in the area, the first snowcat was delivered to the lodge and thus began Island Lake’s revered legacy as one of the best in the biz.

Of course word was getting out, and in the early nineties Craig Kelly and Scot Schmidt began frequenting in the area. Around this time the entire 7,000 acres went up for sale. The partners at the time had 30 days to come up with the money to secure the land and at the eleventh hour they put together a buying group that included Kelly and Schmidt.

Island Lake has never been just another developer’s wet dream to cash in on the popularity of snow sports. In its veins courses diehard skiing and snowboarding. Its importance in the history of the industry can’t be overstated.

Island Lake was the first place both skiing and snowboarding were filmed together for a mass audience, with Schmidt and Kelly breaking ground in the film Siberia. This collaboration signalled an epoch of cooperation of industry heads like Terje Haakonsen, Trevor Peterson, Eric Pehota, Jason Ford, and Seth Morrison, to name a few, along with media heavyweights Henri Georgi, Mark Gallup and Scott Markewitz. Island Lake became a melting pot for the ideas that would come to shape snow sports as a whole. And the coverage hasn’t waned.

With footage in Sherpas’ 2012 release All.I.Can., and this year’s release of TGR’s Tight Loose, Island Lake remains a nexus of creative and athletic talent in both the single and two-plank worlds, serving as backdrop to some of the most groundbreaking films today. After three days of dropping in from some of the most incredible fall lines I’ve ever ridden, I now see why.

It’s not hard to daydream back to the Island Lake Lodge’s formative days and imagine the first lines down Geisha Bowl, or through the Enchanted Forest and Lower Baldy. It’s easy to get lost in the history and nostalgia of it all, reminiscing on the magazine covers pasted to lockers and bedroom walls. Way too easy. Even for an on-again, off-again pile like me.

In a word, Island Lake is fun. The oversized pillows that blanket giant felled trees are fun, the silkysmooth rollers one can’t help but hit way too fast are fun, the lifelong friends I made are fun, and the high alpine spine traverses and steep-and-deep speed lines through virgin powder are not only fun, but forever seared into my memory, potentially at the expense of all future on-hill experiences.

Most of all, Island Lake and its hedonistic trappings are both accessible and accommodating to even the most average Joe. And that will forever be the beating heart of its lasting allure. 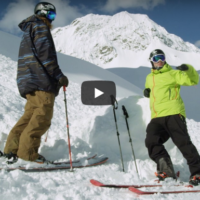 WATCH TGR SHRED POSSE SESSIONS AT ISLAND LAKE LODGE
Island Lake Lodge is a special place. The terrain is wide and varied, with everything from classic jumps, big rocky mountain terrain and a micro-climate that blankets the area with some of the deepest snowfall in Canada. When a crew of Teton Gravity Research athletes headed up to the lodge last winter, epic sessions went down. Experience what happens when Dash Longe, Dane Tudor, Nick McNutt & Tim Durtschi head up to Island Lake Lodge for an epic session…Watch video