In celebration of Canada’s 150th, Mountain Life Publisher and Photo Editor Glen Harris and his clan are on a on three-month Eastern Canada National Parks tour. This week they explored the Forillon National Park. Keep a lookout for our photo essay series in the coming months. For daily updates you can follow Glen on Insta @glenedwardharris.

We’re snorkelling when a seal stops its underwater dance for food and zooms over to take a good look, then comes a little closer.

We hear a whale breathe in from 10 feet off the bow of our boat. A healthy momma bear and her cubs decide to graze, steps from our oTENTtik.

A moose snaps branches while lumbering through the bush nearby. The steely eyes of a wild hog who lives under the shed near the wash stations greet us daily.

We marvel at the dive-bombing gannets along the shoreline, the camaraderie of their colony. We watch a powerful tuna surface, chasing its next meal.

There’s nothing to do but stand and bear witness. Be present and thankful. A little intimidated. Humbled.

Forillon National Park is located on the outer tip of the Gaspe Peninsula in Northern Quebec. There are heritage centres, lookouts, biking and hiking trails, and stunner Acadian shoreline views. Nearby is iconic Perce Rock, a GeoPark, zip-lines and a glass-bottom lookout.

All impress big time. There’s the French culture and Acadian pride (that has to be felt to be understood). Try Nova Lumina, the two-hour multimedia themed outdoor shoreline light show. And the best mountain biking I’ve experienced east of the Rockies is here, at nearby Mount Bechervaise.

But it was the wildlife that stood out. It’s one thing to watch and learn from an animal, or see it in its habitat. But you know you’re having a special experience when you can actually hear the animal breathe. When they stop what they’re doing to look at you for a little longer than you’re comfortable with. The space between you becomes visceral. 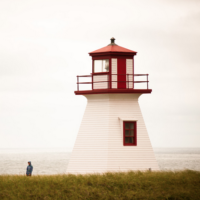 CANADA 150: AN EASTERN CANADA PARKS TOUR: MAGDALEN ISLANDS
In celebration of Canada’s 150th, Mountain Life Publisher and Photo Editor Glen Harris and his clan are on a on three-month Eastern Canada National Parks tour. This week they explored the Magdalen Islands in Quebec, while not a national park, it is a national treasure…. Read more