Heading out to the theatre to catch a flick is one of the last great human rituals – fraught with habitual behaviours like observational silence, and obligatory stillness – not so much so in Owen Sound. 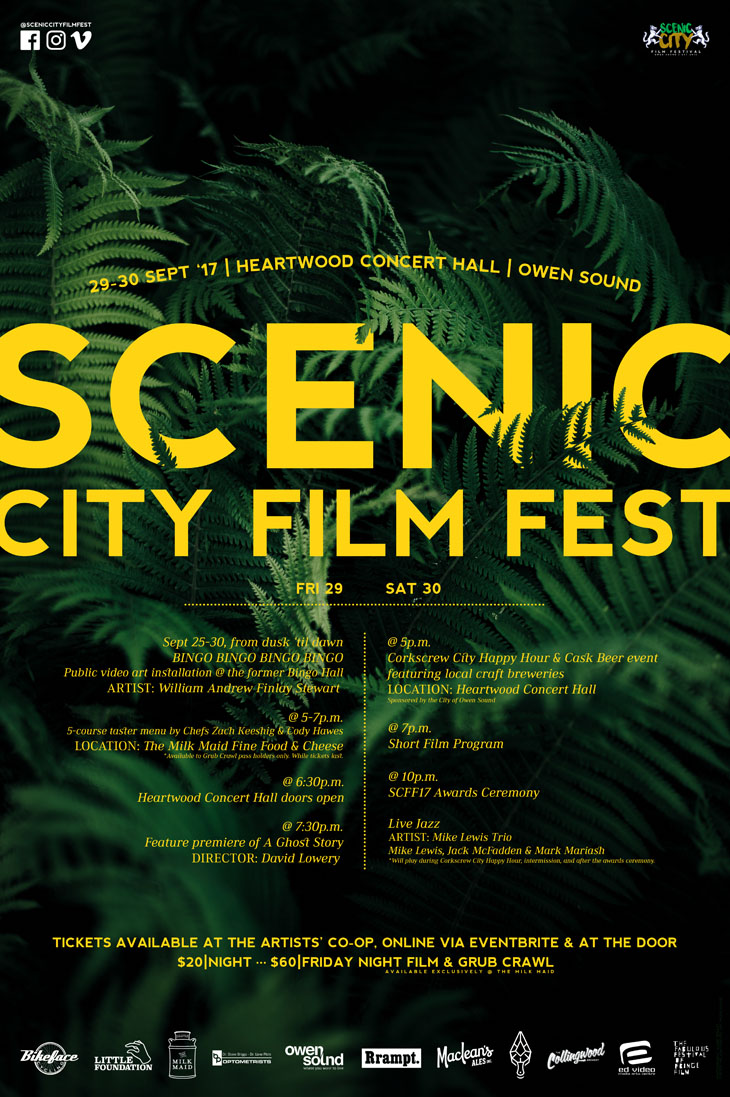 The Scenic City Film Festival is back for 2017 in Georgian Bay’s largest city-centre with a few new twists and a few old favourites. Owen Sounds’ premiere cinematic event takes place this September 29th and 30th at downtown’s Heartwood Concert Hall, a growing regional hotspot known for its world class music and entertainment offerings. An unorthodox setting for a formal film festival, the organizers have always sought to mix things up with camaraderie, schmoozing, cinema and art over the last 4 years, helping to make film more accessible in rural Ontario’s near-north.

“The idea was always to give local filmmakers a place to showcase their work, and over the years we’ve developed an identity as an engaging film festival that celebrates what Owen Sound is all about,” says festival co-founder Nelson Phillips. “We’re happy we have the chance to blend the prescribed film festival experience with a feel that’s more our speed.” 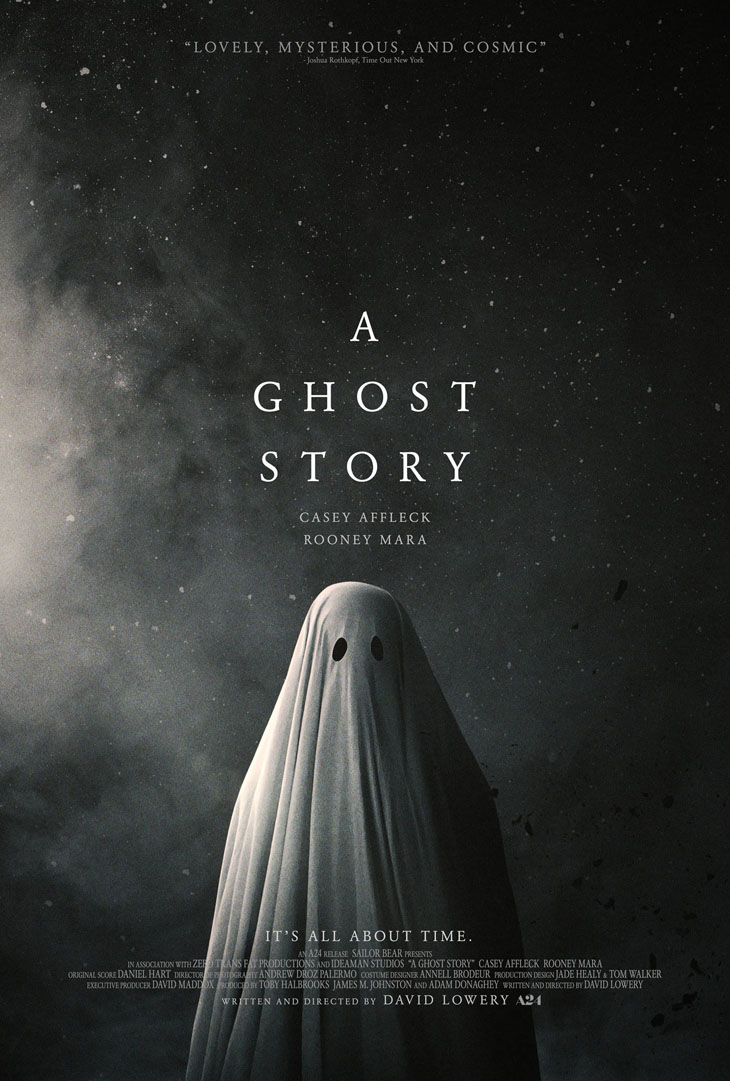 Co-founder Myke Dyer adds that the community event offers and combines a multitude of different styles of film, including animation, documentary, and narrative genres to provide a wide array of content. “Small and intimate events like the SCFF are very important elements of the Canadian cultural landscape. While every major city offers opportunities for urban filmmakers to see new and innovative work, rural audiences are literally left in the dark. The SCFF is a smart, creative festival that promises to surprise with unusual curating and engaging screenings.”

The 4th annual fest is a myriad of cinematic flavours; Friday night’s feature premiere is David Lowery’s A Ghost Story, starring Rooney Mara and Casey Affleck and boasting an impressive 92% from Rotten Tomatoes and receiving 4 stars from Roger Ebert’s website. The legendary film critic’s platform even included a plea to viewers in the review, stating; “I rarely see a movie so original that I want to tell people to just see it without reading any reviews beforehand, including my own. David Lowery’s “A Ghost Story” is one of those movies. So I’m urging you in the first paragraph of this review to just see it and save this review for later…”

“Small and intimate events like the SCFF are very important elements of the Canadian cultural landscape.” —co-founder Myke Dyer

The big show for the SCFF has always been the curated short film program that takes place on Saturday night. The event is widely regarded as the main event, garnering big crowds and a film program that rivals some of the more established festivals down country. This year, the majority of films are Canadian, with the odd exception from Switzerland and France. About 50% of the program are local film, giving festival goers the chance to mingle with filmmakers at the first-ever cask beer event the City has ever seen. 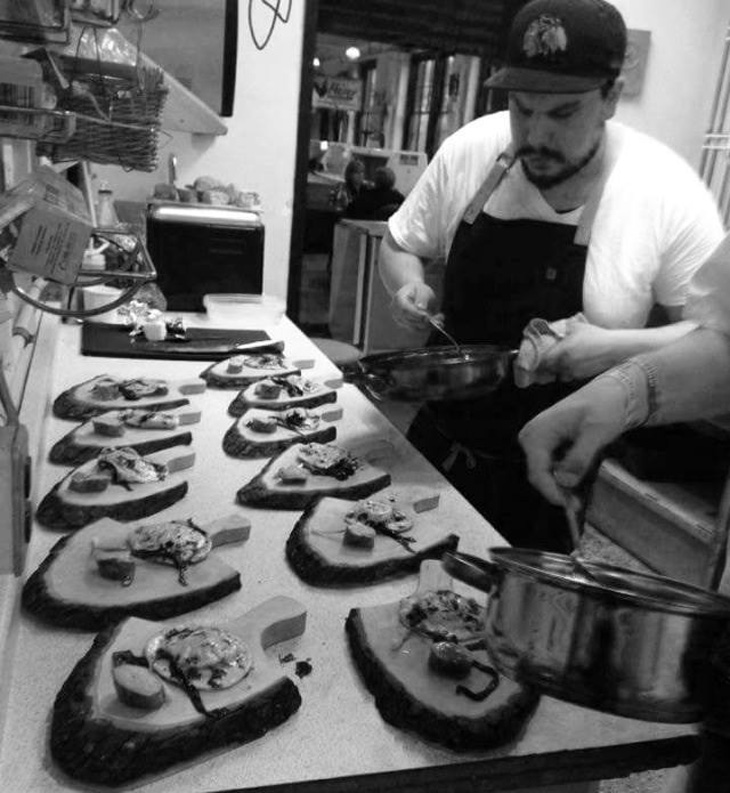 The Corkscrew City Happy Hour at Heartwood will feature cask beer offerings from the Collingwood Brewery, Maclean’s Ales, and Black Bellows, along with an informative display of Owen Sound’s storied relationship with prohibition up until 1972 – all presided over by the wicked Mike Lewis Trio, a supergroup jazz outfit consisting of Mike Lewis, Jack McFadden, and Mark Mariash.

An award ceremony takes place following the film selections, and are awarded courtesy of the will of the people. A democratically calculated judging system allows the audience to choose the People’s Choice award, Best Local Film, Best Editing, and Best Documentary film. Following the evening, festival goers are invited to stay for a pint, hang with friends and enjoy some good company and good cheer.

Tickets for the SCFF are available online via Eventbrite, at the Owen Sound Artists’ Co-Op, and at the door. 25 very limited tickets for the Friday night Grub Crawl are exclusively available from the Milk Maid in downtown OS.