Squamish, B.C.-based adventurer and mountain guide Jia Condon gets around. Whether sailing aboard the yacht Northanger to climb in Greenland and Antarctica, working as a head guide at hallowed Bella Coola Heli Sports, or just generally roaming the world in search of climbing and skiing adventure, Jia has spent plenty of time in the halls of the mountain gods since turning pro in 1995. Finding himself often in spectacular landscapes, it’s no surprise that Jia is also a passionate photographer with many catalogue and magazine credits to his name.

But as a classic low-key Canuck, his photo acumen tends to be as understated as the many first ascents and ski descents he has completed. Nevertheless, he was Johnny-on-the-spot for this shot of Chris Geisler on the rope during pitch-assembly for a first ascent of the “Spray On… Top!” route at Helmcken Falls in British Columbia’s Wells Gray Provincial Park in February 2012. Pioneered by the Canadian duo of Tim Emmet and Will Gadd in 2009, it’s full eight pitches were climbed in one go—days after this photo was taken—by Emmet and Slovenian Klemen Preml.

“It was easily the wildest free-hanging jumar I have ever done. Being beside the raging falls and above the ice crater was super intense. The climb was incredibly impressive to watch and the amount of work and commitment was equally impressive. The setting is like nowhere I have ever been. Super objective with intimidating ice daggers constantly looming overhead. Not a place to take lightly.”—Jia Condon 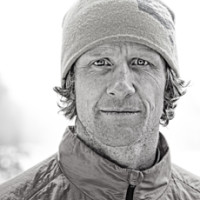