When three friends set out to find waves and wind on motorcycle, they proved the old adage that it’s not about the destination, but the journey.

From the film makers: Never has the sentence “IT’S NOT THE DESTINATION BUT THE JOURNEY” had so much meaning for us before. It seems cliche to say that but that’s really how it is…

It was not only a kitesurf/SUP trip, it was a real adventure along the way.

What you see in the video is what we lived for three weeks. Probably the hardest trip we’ve done so far. The excess of weight was a real handicap during all the trip, specially during the desert part, not to say that non of us are professional motorbike pilots (Nuria learnt to ride a motorbike 10 days prior to departure). No external assistance, only the three of us.

The average time packing every morning was about 1.5 h (kiteboarding gear, an inflatable stand up paddle, several cameras, camping gear… ).

More than 400 GB of images captured, 5.000 km ridden and lots of memories and emotions that we tried to summarize in a bit less than four minutes.

Enjoy the ride, for us “the great journey” 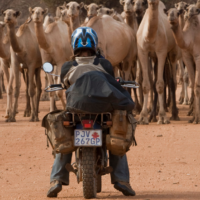 BITTEN: HEADING DEEP INTO THE BEAUTY AND SQUALOR OF REMOTE AFRICA TO AID IN THE FIGHT AGAINST MALARIA
At 5:30 a.m. we’re jolted from an ugly cement-floor sleep. Looking outside, I see a boy feverishly banging away at a rusted truck hub hung from a tree branch. It’s a brutal awakening, but just one morning for us—the 300 students at Manyara Secondary School in northwest Tanzania rise to this makeshift alarm clock every day. Unpeeling ourselves from sweaty sleeping bags we’re offered plain tea and white bread for breakfast. Outside, kids saunter around in clusters before gathering at the middle of the courtyard…. Read more