There’s so much unknown ahead. Joane and I are perched on a couchsized rock jutting into the empty, airy fjord. The sea, a grey-blue glacial mixture, surges at our feet, the steep and gloomy forest looms behind.

We have ten days of food and 10 days to traverse a mountain range to a water taxi pickup at the Powell Lake drainage. Is the route even possible? There’s absolutely no record of anyone doing this trip. It looks pretty doable on Google earth, but who puts all their trust in the Internet?

I can feel the nervousness in my intestines. Matt, the friend of a friend of a friend who brought us here on his boat, seems hesitant to leave. He idles offshore for a minute, as if giving us one last opportunity to bail. What are we getting into? Only one way to find out – we turn, and start walking.

Toba Inlet lays deep in BC’s south coast, the furthest reaches of the finger of sea that stretches away from Desolation Sound and into the Coast Mountains. It’s a deep glacial fjord with peaks shooting up from the Pacific like teeth around a tongue. Lush green rainforest blankets the steep flanks of the mountains. Higher up, the massive conifer forests thin to reveal huge slabs of exposed rock. Glaciers nestled 1,800 metres above us drip directly into the sea. All access to this area is by sea or sky; the nearest road is 50 kilometres across a mountain range.

The adventure started months before. The fjords are a renowned boating destination, but enticed by spectacular satellite imagery and reports of continuous ridge-top walking, Joane and I became hooked on the idea of exploring the area on foot. Hours of procrastination at our day jobs, scoping the terrain online, led us to plot our perfect 40-kilometre-ish alpine route. Well, we hoped it was perfect.

The forest has swallowed us whole and we weave ourselves into the jungle-y mess. Generally, it’s a futile, ferocious catfight with the undergrowth, interspersed with clawing up mossy cliffs or tottering over fallen trees. Ten hours later we’ve struggled enough, and crash knackered, in a flattish hollow. Our Pad Thai dinner isn’t paired with mountain views as we had hoped. Instead we have destroyed legs and wasp stings and we’re still in the trees, having only gained three kilometres and 1,400 metres of elevation. We sleep slightly beaten, but content, and so close to the treeline. Eight days of wistful alpine terrain awaits just a few hundred metres higher.

Early the next morning, the dense rainforest fades to alpine meadows and we’re freed from the horrors of forest life. The glorious open air kisses my cheek as the band starts to play. Finding an incredibly spectacular campsite at midday, we play a rest-day trump card and stop. At a deep, glistening tarn on a ridge suspended over the fjord behind, we plunge into the frigid water and exorcise our destroyed shells. We feast on pasta difungo e parmigiano while watching over the shimmering fjords, as the sunset highlights the swarms of mountains in all directions.

The next five days are bliss on a stick. It’s a dream route, scrambling along a towering rocky ridgetop. I’ve never seen so much exposed granite in my life-soaring rock faces surround perfectly shaped cirques, and sharp marlin-fin ridges separate steep glacial valleys. When tracing a route on Google Earth, we assumed the ridge was too sharp to traverse; in reality, it’s a scrambler’s highway. Worn smooth by ancient ice, the stone ridgetop follows long, large slabs with intermittent, large blocky steps.

Maps and Google Earth aren’t detailed enough to be useful, so we divine our way through obstacles trying to sense where a route could lead.

“There’s ALWAYS a way!” Joane sings as we find a narrow chimney ramp connecting two large slabs separated by a cliff. As the day progresses, we get quicker at finding routes. We’re starting to understand the character of the rock.

“Of the 45 km we missioned, 30 km were high on ridgetops, an absolute dream for those who like their heads in the clouds.”

Morning #8 and we poke our heads out of the tent to see we’re swimming in a suffocating cloud. The next step is a tricky traverse of a bluff-like mountain, and we suspect it will only be possible with clear weather. We set off optimistically hoping for the winds to turn, but instead it starts to rain and we’re forced off our glorious ridge. A steep bush bash brings us to a sandy beach of a cirque lake. Too miserable to properly notice its beauty, nor having any desire to swim, we traverse the lake until we’re blocked by a massive break in the forest. An immensely steep, granite slab links the bluffs overhead all the way down into the lake and I imagine the distant plopping sound of one of us slipping down the 30 metres of slick rock into the grey water below.

We discuss our options: a fall in the lake would be miserable but not dangerous, so as darkness falls, I edge across the slab, trying to smear my boots on anything that looks slightly spiky or dry. It’s hard to trust, so I paste my fingers, gecko-like on the rock. Bridging a mossy steep spot, I lunge, take some deep breaths and I’m on the other side. Joane curses as she navigates to the waterslide. I toss her a rope end, more for moral support than anything, and she carefully clambers across.

That night, our tent is a saggy, wet pit but it remains delightfully cozy in our double sleeping bag. From seemingly nowhere, Joane materializes a block of chocolate. I’ve been told many times to absolutely never eat in the tent in bear territory, but our battered bodies are incapable of that kind of abstinence. We munch the entire block as morale rises. A deep slumber takes over.

The morning brings more rain and an end to the trip. We had hoped sunshine would lead us back to our wondrous ridge, but instead we slog through a long bush bash to an anticlimactic 13 kilometres of mind numbing logging road to Powell Lake.

Ten days of wilderness and unknowns. Ten days of not very technical terrain, but riveting route finding and exhilarating exploring. And it had all started while being bored at work, playing around on Google Earth. Technology can be a barrier to experiencing nature, but it also allows us to explore more easily and safely than ever.

But what is exploring? We have no blank areas on the map, logging roads span every valley and we can see every spot on the globe from our home computer. Exploring in the traditional sense doesn’t exist. Alone on a foreign ridgetop, straining to find a route, I certainly feel like an explorer.

We don’t need frostbite, 3-week pemmican meal plans or scurvy to be an explorer. The sense of discovery is unique to each of us and the Coast Mountains are a sublime spot to tap into new routes and zones—they’re raw, wild but relatively accessible. (On our trip we were never more than about 150 kilometres from Vancouver as the crow flies.)

So the next time you’re bored at work, instead of Facebook, open up Google Earth. Can you spot any interesting areas that might need checking out? Put that technology to work. It can help you get outside. 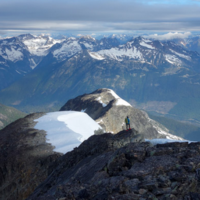 BACKYARD: HIKING AND PARAGLIDING JOFFRE PEAK WITH AUSTIN ROSS
The Sea-to-Sky is home to a long list of dramatic peaks that watch over our valleys. Lucky for us there are countless ways to explore them. One of the more popular alpine access hikes in the area is the Joffre Lakes trail. My first experience in the zone was on an overnight camping trip with my 5th grade class from Signal Hill Elementary in Pemberton… Read more