Mountain Life founder Glen Harris is getting back behind the camera where it all began. In celebration of Canada’s 150th he and his clan just left on a on three-month Eastern Canada National Parks tour.

This week they explored Kejimkujik National Park, in Nova Scotia. Keep a lookout for our photo essay series in the coming months. For daily updates you can follow Glen on Insta @glenedwardharris.

Kejimkujik is a Mi’kmaq word meaning ‘tired muscles’ and that’s quite fitting considering all the self-powered travelling you’ll do here.

The bike trails at Keji ride more like gravel commuter lanes with boardwalk and canopy and they’ll take you to the sunset, along rivers, lakes, and an amphitheatre.

The lakes have a Muskoka feel from the top. Below the waterline is darkness: dense vegetation and aquatic decay mixed with slate runoff creates opaque black water. It’s quite a sight from the paddleboard. It makes you wonder what’s lurking down there.

According to Mi’kmaq folklore, Aquabat lies in the depths waiting to steal men who swim in these lakes. She’s looking for husbands. She’ll take the boys, too. She’ll pull them below the surface and keep them until they grow up. She grabbed my leg once but I never caught the photo.

As for accommodations, this was our first oTENTik experience. This smart design is a mix of tiny A-frame with a prospector tent and amenities include a solar light an iPhone port, propane heat, table,
and beds for 6 with one upper double and four lower singles. Quite luxurious actually, and bug proof.

The only problem is it’s impossible to feel OK about moving back to a tent after a night oTENTiking. They even provide a charcoal Weber BBQ. Everyone else in the campground is jealous for sure, and we can’t go back to setting up a tent. So thanks for that, Parks Canada.

We never made it to the Adjunct this round. It’s 22 acres of sweeping oceanside trails, and another experience entirely, but sandy beaches, double-wide trails, lakes that feel like Muskoka, and extensive riverways are Keji’s strengths. 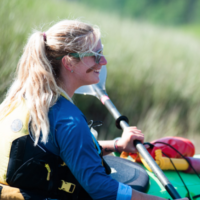 CANADA 150: AN EASTERN CANADA NATIONAL PARKS TOUR — STOP 2. FUNDY}
Molly Kool, North America’s first female sea captain in 1939, lived just seconds outside of the incredible Fundy National Park. Not only was she Kool with a capital K, but she also picked the right spot to live. Where else can you walk on the ocean floor, descend on endless singletrack bike trails, catch live music, explore covered bridges and paddle through cascading fog, all in one day—or maybe two? 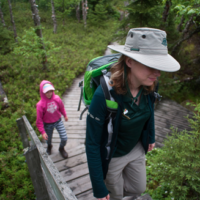 CANADA 150: AN EASTERN CANADA NATIONAL PARKS TOUR — STOP 1. PUKASKWA
Waking up to the pitter patter of rain after arriving the night prior was a little discouraging. Until I realized it was the black flies banging against our tent fly, then it got a little more discouraging. After rolling over over and falling back to sleep like it was a bad dream, I woke and ventured out. Luckily they were not that ferocious and after a while you kind of forget about the swarms. Layers of bug dope later we made our way off the site and into the Park… Read more