At less than 20 years old, road ecology is an emerging scientific discipline—albeit one that should have been birthed earlier. After all, we’ve been messing up wildlife with roads for centuries, drawing lines on the landscape that carve up habitat and territories, deliver pollution, impede seasonal movements, and interrupt gene flow. For humans, roads get us where we want to go. For other animals, they can be the most dangerous element in their environment—a one-way ticket to oblivion. No more so than for small, slow-moving creatures like reptiles. 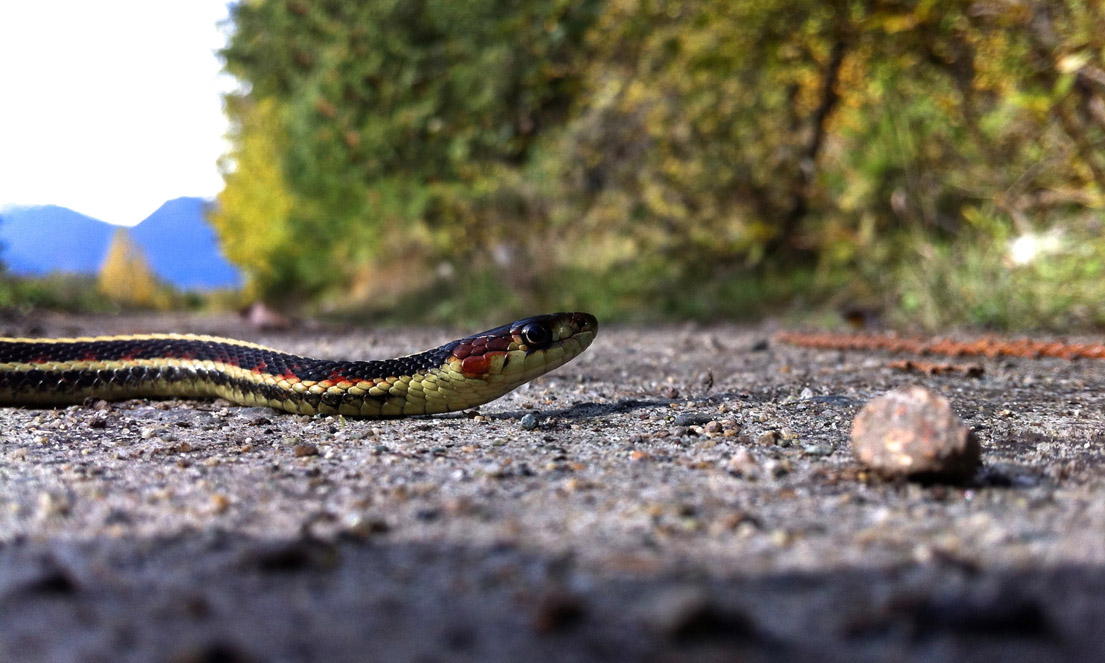 So summed James Baxter-Gilbert by way of backgrounding his Laurentian University-based Masters degree study of reptile road mortality along newly expanded sections of Ontario’s Highway 69/400. Bisecting the labyrinthine coastline of Georgian Bay, home to Canada’s richest reptile biodiversity, this major north-south artery contributes to the inordinate number of these species—five of Ontario’s six turtles, and five of its 12 snakes—designated as Species at Risk. Already big and busy, the highway’s twinning and associated traffic increase presents further significant threats.

Conducted over two years at a pair of sites 50 kilometres apart, Baxter- Gilbert’s investigation yielded abundant data from an unmitigated control site on the Magnetawan First Nation, where roadwork had yet to commence, and from a more northern “impact site”—a section 40 kilometres south of Sudbury that, in 2012, was a two-lane with no mitigation for crossing reptiles, but which by summer 2013 had transformed into a four-lane separated by an intervening meridian.

The stretch also incorporated mitigation structures like mammal and reptile fencing, as well as five ecopassages: four under the road for small critters, and an overpass for larger mammals. Each site, 13 km in length, was driven by crews three times a day—9 a.m., 6 p.m. and 10 p.m.—corresponding with known periods of reptile movement with the intent of observing changes to the abundance of reptiles on mitigated versus unmitigated roads, along with other aspects of the efficacy of the mitigation itself.

After driving the impact site with Baxter-Gilbert one day and finding little, we’d headed south to his control site. Slowing to cruise the dark road, we immediately found a DOR (dead on road) rattlesnake, hit since we were there four hours before. It was large—over 80 cm—but run over so many times it was difficult to measure. It only took a few trucks on hot pavement, noted Baxter-Gilbert, to produce “snake jerky”—one of a constant stream of black-humour roadkill euphemisms (is there another kind?) that his crew used to distract themselves from the carnage. While scraping up bits of turtle carapace—a structure evolved over millions of years for defensive purposes but no match for a car, now scattered along the asphalt like shards of pottery—they displayed a sanguine shell of their own, inured to get the work done. “You get used to it,” Baxter-Gilbert’s partner Julia Riley had told me, “but there are still moments when it gets to you. Like when it’s an older animal, or a female turtle with eggs or a big snake with live young inside her, or an animal you’ve marked or have been tracking.” 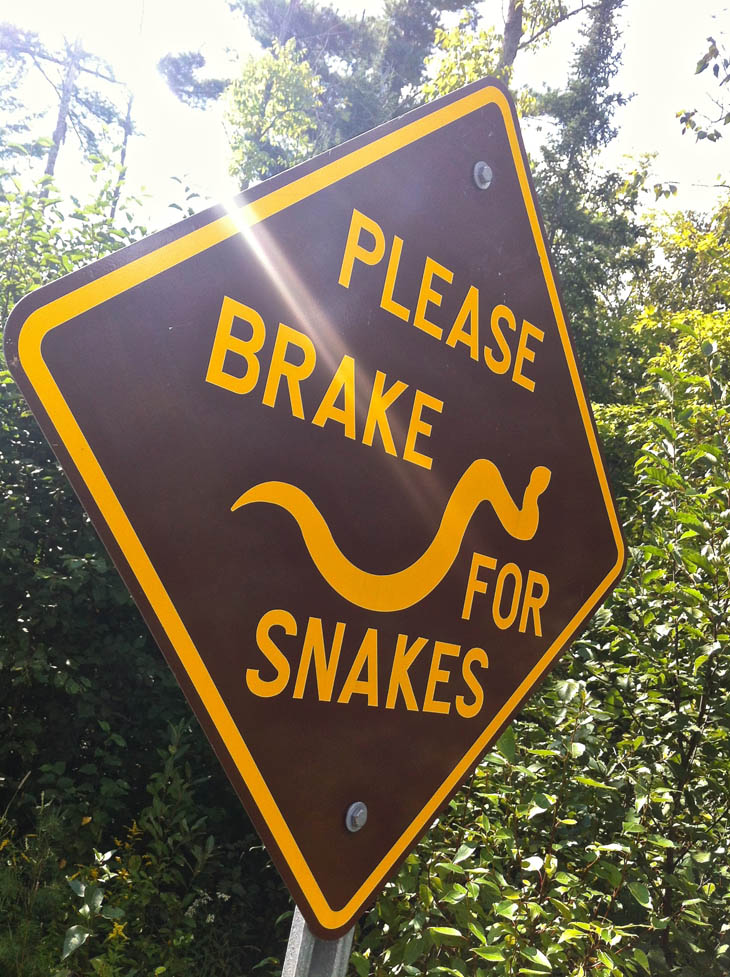 Road ecology isn’t only about death. Looking into the science, all sorts of interesting data appear to inform our understanding of behaviour and adaptation. For instance, with an estimated 80 million birds killed on U.S. roads each year, changes in roadway design and maintenance have been proposed to mitigate the toll. With that level of mortality often focused on particular species, scientists have hypothesized that natural selection might favour individuals which, through some trait or behaviour, might better avoid collisions. Baseline information that could speak to this was scarce until Charles and Mary Brown of the University of Tulsa noticed something interesting during a study of cliff swallows in southwestern Nebraska.

Following the birds’ occupancy of roadside nesting sites, the Brown’s found the frequency of roadkilled swallows declined sharply over the next 30 years, and that DOR birds tended to have longer wings than the population at large. The conclusion was inescapable: traffic was indeed selecting for individuals with shorter wings and thus, greater maneuverability.

Like any new science aimed at a problematic milieu, road ecology comes with new opportunities for solutions.

Like any new science aimed at a problematic milieu, road ecology comes with new opportunities for solutions. XING, a partnership of the Toronto Zoo, the Ecological Design Lab at Ryerson University and ARC Solutions that looks to (re)connect landscapes, sponsors a public display at the zoo explaining just why roads are so bad for critters: most wildlife travels long distances between food, mating and overwintering areas, and the bigger an animal’s range the more likely it is to encounter roads: the average grizzly bear range is 1,000–2,000 km2, moose 5–40 km2. No surprise then that some 4–8 large mammal collisions take place in Canada every hour. Beyond economic and safety issues, however, the broader effort to reconnect habitats asks a simpler question: how do we carry a landscape over a road? The answer is to make wildlife crossings visible, with a harmonious aesthetic, re-establishing both our own relationship to the landscape of nature while providing safe passage, and making motorists aware of the habitats they’re fragmenting.

One day at the impact site, equipped with small Ziplocs, Baxter-Gilbert and I plucked up dead insects for a companion study. We found bumblebees, dragonflies, beetles, and plenty of endangered monarchs butterflies. Over the two summers, Baxter-Gilbert collected 117,000 roadkilled insects, allowing him not only to estimate insect mortality on Highway 400—a medium-use road of 10,000 vehicles per day in an area of medium insect diversity—but extrapolate that to the entire length of similar roads in Canada and the continental U.S., yielding figures of 10 billion butterflies and moths, 25 billion bees and wasps, and a staggering 60 – 190 billion flies per year, a vast majority of them primary pollinators. 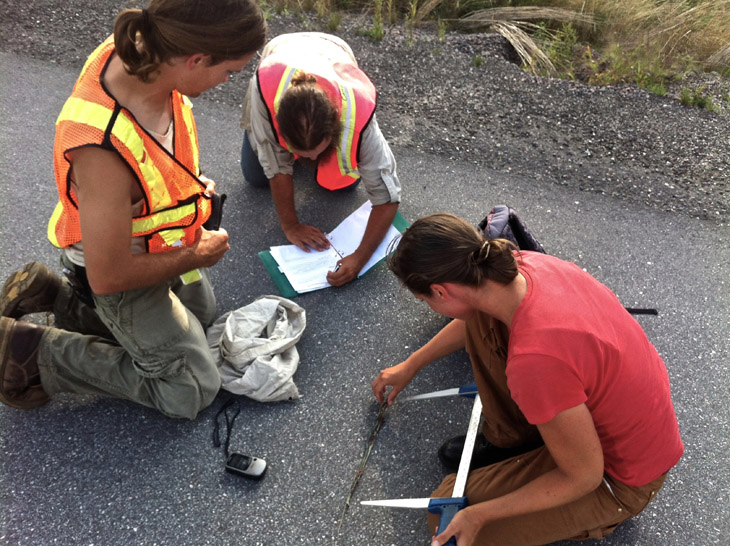 Reptiles, of course, remained his focus. Of 996 encountered on the road over two summers, 83 per cent were DOR, even where mitigating structures were present. Something was seriously wrong. “People need to understand that mitigating for human safety is different than mitigating for conservation,” Baxter-Gilbert summarized. “A fence can keep deer off roads, but their populations are large and spread out so there’s a much lower risk of fragmentation. Reptiles are different. They’re small and damned determined, which means they’ll go around an incomplete fence, climb over it, find every flaw along its length… So the traditional method of putting up some knee-high plastic or hardware cloth isn’t good enough. Those require constant upkeep, and that’s too costly on large expanses of highway. We need to build something more permanent that doesn’t require daily patrols, weekly patching or yearly replacing.”

In the end, everyone knows we can’t stop roads. But we can do better when it comes to their effect on wildlife. Says Baxter-Gilbert: “If road ecology has taught me anything it’s that simply understanding a problem doesn’t do squat: you have to want to fix it—and in the best way possible.”