Walking a 52-metre highline, at 2,800 m, Haley Ashburn contemplates fear and serenity. Watch this incredible footage of one woman’s quest to push the boundaries of what holds us back from our potential.

From filmmaker Stian Smestad: “Before walking a 52 meter highline at 2,800 m altitude in midst winter, I asked Hayley about fear. She replied with her favorite quote from Frank Herbert’s “Dune”. A short film about Hayley Ashburn, filmed in the Torri del Vajolet, set to the hypnotizing soundtrack Tristana by Nils Frahm.” 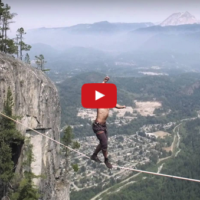