Rolling up the gravel driveway of SJ Sherbanuk’s home in Banks it’s clear the guy is obsessed with steel; an old truck chasis swings across the road as a gate, and further up the hilly, winding track, an old Model T Ford sits rusting away in the bush. Then there’s the house itself; nestled on the edge of the woods of a 37-acre property, Sherbanuk’s home humbly towers three stories up into the green canopy, the orange rusting steel outer shell of the home complementing the green of the leaves that surround it.

A house where seemingly no expense was spared, the house was originally a home for Sherbanuk and his fiance (now-ex-fiance). Designed by Duntroon architect Jim Campbell of Rockside Campbell Design Company Inc., Sherbanuk was looking for what he calls a “shed.” And that’s what Campbell designed. Finished in May of 2007 there were 72 site meetings over the course of its construction to make sure that Sherbanuk got exactly what he wanted.

“I wanted to build a home that had flow to it, where rooms were multi-purpose, and using what the land had to offer, things like the passive solar,” says Sherbanuk. “I didn’t want to make a statement, like, oh I have a six car garage.”

Originally from a small mining town in Northern Ontario, 54-year-old Sherbanuk is as obsessed with steel as he is the outdoors. While he makes a living from recycling old steel, his free time (which he seems to have plenty of) is full of cycling (mountain bike and road), climbing, skiing and general outdoor activities. That’s how a guy like him ends up in a place like Banks. 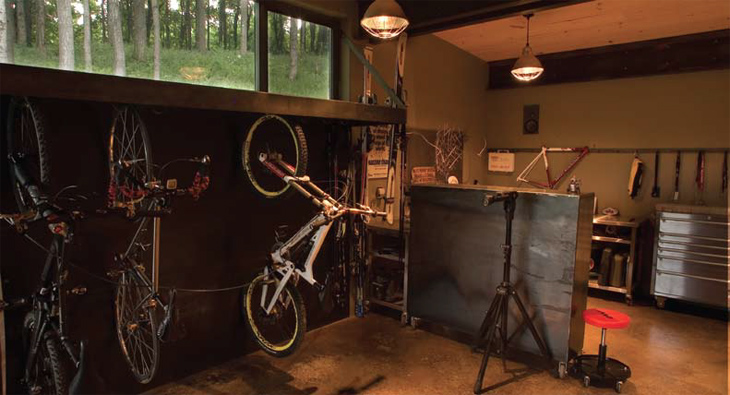 “I had a place on Georgian Bay, I have a bedroom in a multi-million dollar Muskoka cottage, and I chose to build here,” he says. “The reason being is that it’s four seasons and I love to bike and climb. As far as I’m concerned it’s one of the best road cycling areas in Eastern North America. I just go out my door. And the two mountain biking venues; Three Stage Trail is about seven minutes, Kolapore’s about 12. Then climbing we’ve got Metcalfe, Young’s Point, Old Baldy, they’re 15 minutes at most. And I created a three km trail here.”

A visit to Sherbanuk’s home is a lesson in simplicity and efficiency; nothing in the 3500-square-foot building is randomly placed.

Coming in from a ride or climb, the flow of the place is immediately apparent; hop in the outdoor shower to wash off the sweat and dust before heading into the garage. While there’s no chance of pulling a car into the room, there is space to put other things in here; like skis, bikes and climbing gear. A customized (steel) hanger system keeps the muddy bikes off the ground and out of the way. Skis hang loosely and a plethora of tools, lubes and components line the workbench (you guessed it, steel), with great lighting, and a hassle-free concrete floor that is easy to clean. 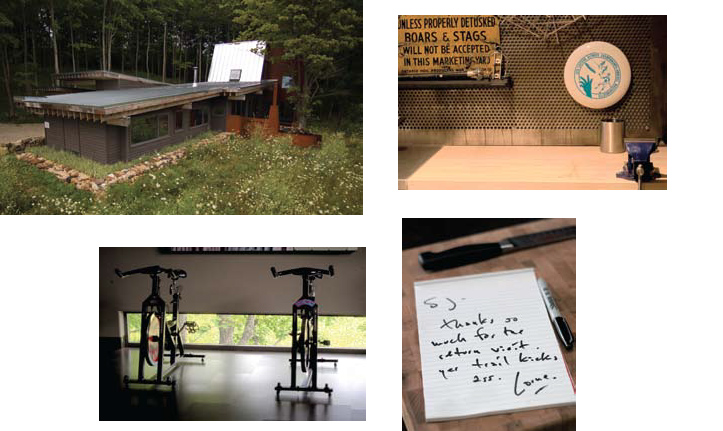 From there you go into the ‘mudroom’–what most people would call a large walk-in closet–where muddy biking gear can be thrown directly into the washing machine. The small, but functional sauna is only a few steps away.

This guy has it all figured out.

A visit to Sherbanuk’s home is a lesson in simplicity and efficiency; nothing in the 3500 square foot building was randomly placed. From windows, to doors, to bicycle racks, everything is created to make for ease of use and practicality. From the soothing aesthetics of the interior steel wall that towers upwards, to the sliding panels that create extra walls so guests basically have their own apartment. In the main, open concept living area a large sectional couch can be pulled apart and reconfigured for ultimate comfort, while the dinner table is on wheels and also comes apart to create a variety of configurations for entertaining (“I got the idea from Stadtländer…”). The entertainment system is contained in a large ominous steel cabinet that continues through the long window/wall to the outside where it becomes not only a rusting work of art, but a functional charcoal barbecue. Custom furniture can be found throughout the house, as can custom steel fixtures made by a local fabricator. 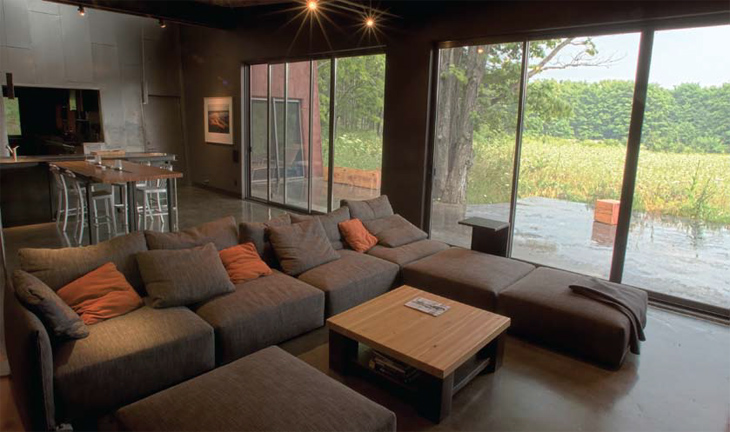 With radiant heating, a wood fire and bedside windows in the master bedroom that allow breezes to blow through the room like a well-ventilated tent, the thought and effort that went into this building are too many to number. We haven’t even made it up to the third floor yoga studio with its uniquely placed windows and fold out kids’ beds.

And while you would think putting this much thought and effort into a home would guarantee that it’s a dream home, Sherbanuk’s recent e-mail states something quite different:

“After going back and forth over many months I have decided to sell Banks only if I get the right number.  In the meantime it’s business as usual. I built Banks for two people and now that I am solo I want to downsize. Jim C., the architect and I are looking at new options in the area (a lot smaller) to ‘do it’ again. I’m still going to spend the same amount of time up here doing the things I love utilizing a smaller footprint.”

So if you too are obsessed with steel, and the outdoors, this place can now officially be yours. That is of course if you can come up with the right number. 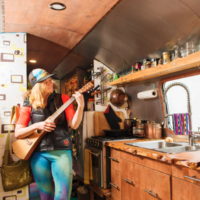 ARGOSY DREAM: LIESL PETERSEN’S GROOVY, LITTLE CAPSULE OF COMFORT
It’s a tale as old as the mountain town itself —outdoor junkie falls in love with town, inflated housing market blows it out, costs jump, and the colourful locals that make up the community tapestry are forced to scramble, or get crafty… Read more