“Which way is the flag blowing?” One nymph (daughter) or the other will answer upon arriving at the Dyer’s Bay pier on Georgian Bay. Then, a visual check off the end to observe whether or not the long shore current is present. 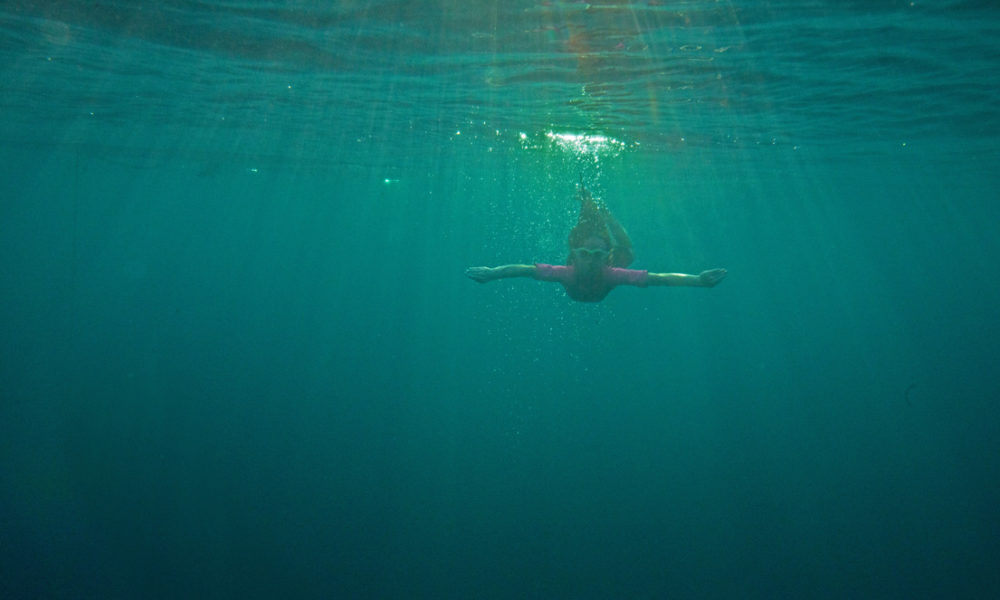 Perhaps even a toe-check to gauge the temps before jumping off the deep end. When all looks good, and we’ve confirmed our clearance, we release our bonds to the concrete pier and spear ourselves into the drink. Shrieks and laughter ensue upon emerging at the surface.

Not many pastimes measure up to what we call “splash and play” sessions at the pier. You’ve heard of forest bathing? This is Bay bathing, and bathing in family time, while literally bathing. But it is also more.

When not at the pier, I take my daughters out exploring as much as possible. It is not uncommon to blast out the door shortly after the bus drops them off after school. We live near the tip of the Bruce Peninsula and wilderness context is a mere 11 kilometres down the road. We can be paddling in under 10 minutes from our house, or climbing the dolostone boulders and buttresses along Georgian Bay.

I relate the water and the geology as a realm of teachables waiting for my daughters, instructing them how to navigate, think critically and act deliberately. En français we say: être aux aguets. Almost like listening to music, where you have single parts playing together comprising a song. To play your part is to be alert to what you’re playing in relation to the other parts and ultimately, the resulting music. In this comparison, the song would be called “Me, We and the Sea”, and it’s more like an old traditional song, than an original.

But one that is on my A side list of teaching axioms to develop my daughters’ awareness of themselves, each other, and the situation around them. The wild coast and all that inhabits there is an alluring realm, and one that can produce a terrible spectrum of changing conditions. This is part of its beauty. We learn and share a lot out there.

I get their bodies and minds working in settings that require them to act out their part.

Self-awareness will help them gauge their personal preparedness for the experience and be alert to their present state. Are they cold? Do they have all essentials for the trip? Are they comfortable with the objective? Self-awareness is most important because only the self can see its own experience of a given situation.

It is up to me to communicate to the rest of my group if I am feeling any slight derailment in my abilities. Likewise, I want to be sure of the others, that they are prepared, and good with the given situation. We practice being alert to everyone else in the group, how they’re advancing along. We watch over one another. Now to place this in the context of the “sea”: out on the Bay we develop awareness of the pulses of change in the weather, and that moody mass of water.

Disagreeable situations are for the most part predictable and avoidable, if we are alert to circumambient conditions. Placing the emphasis on what to make of any given situation is more important that the situation itself. Being alert not only enables us to predict certain dangers, but also helps us handle risk and steer the outcome of our experience. I get their bodies and minds working in settings that require them to act out their part. The rest is infill of spontaneous discovery of their environment and the continuous development of the abilities necessary to explore it.

Every splash and play session has shaped these gals into the ultimate adventure companions. Extra socks and headlamps are standard kit in our drybags. Their curiosity and proclivity to explore the natural venues that surround them lead me to prioritize these episodes for them amidst the day-today hustle. I have beheld the roots of relationships ensue between them and the places they inhabit. They call the Bay home. They often pack out more than they pack in, picking up any garbage they can manage. Their considerations of the impact of their actions on wildlife and their environment grant a high score on my exam. For ultimately the wellbeing of the sea will ensue from the love and protection of we, to the delight of me. 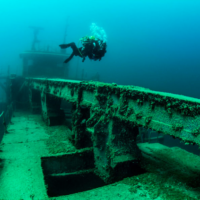 TOTEMS OF THE DEEP: THE ISSUES FACING FATHOM FIVE NATIONAL MARINE PARK SHIPWRECKS
Below the waves of Georgian Bay lie innumerable shipwrecks whose culture we’ve mostly forgotten. But when you spend time with these artifacts you begin to realize the stories the Bay can tell you. And for me the question always surfaces: How do we safeguard the wrecks?… Read more