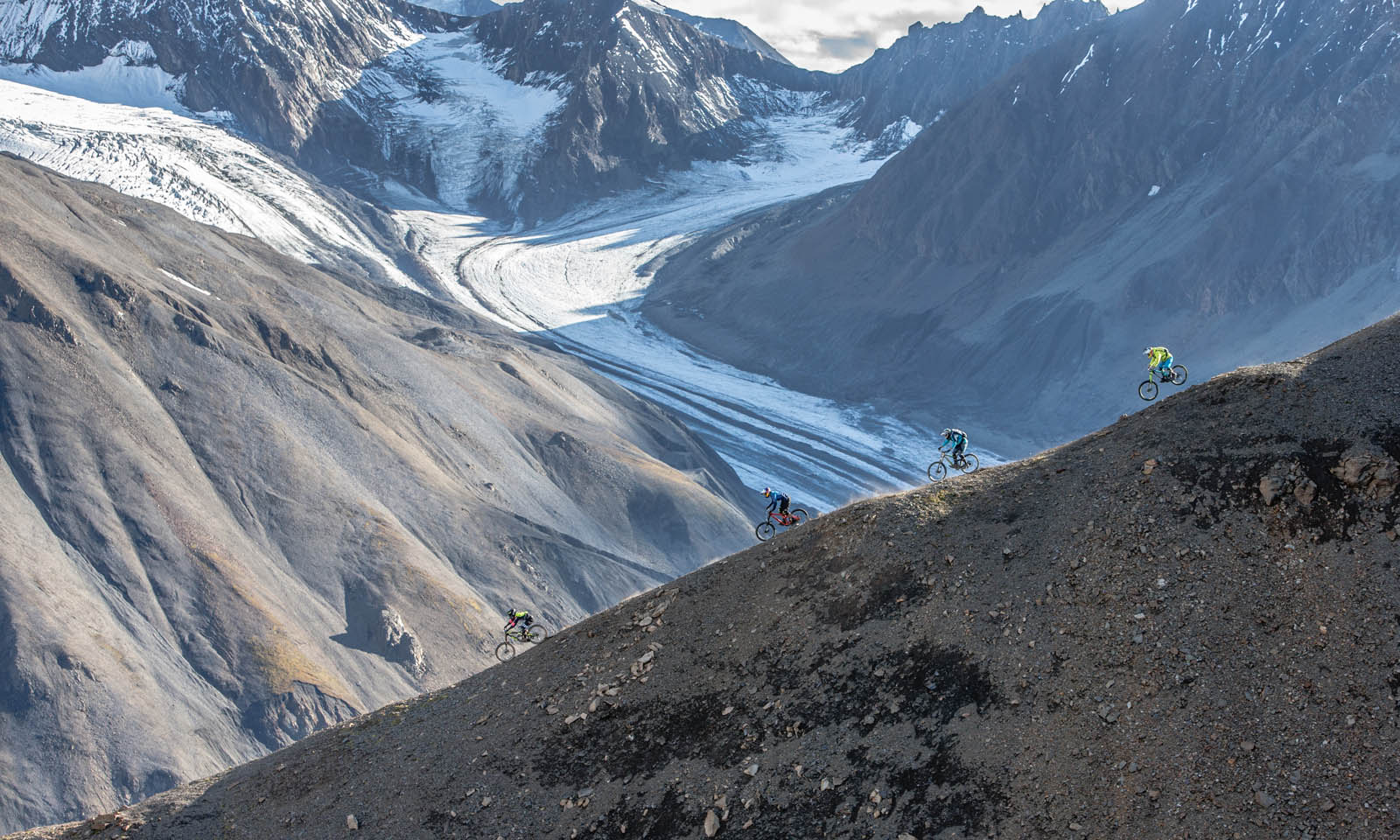 It sounds like the start of a joke: What do you get when you put four mountain bikers in a rubber raft for two weeks?

Answer: The trip of a lifetime.

Wedged into the very Northwestern corner of British Columbia, Tatshenshini-Alsek Provincial Park contains nearly one million hectares of glacier-covered mountains and pure untamed wilderness. Combined with the Yukon’s Kluane National Park and Reserve to the north and Alaska’s Glacier Bay and Wrangell St. Elias National Parks to the west, the area is the largest swath of protected lands on the planet.

And a river runs through it – a big one. At 255 kilometres (140 miles) long, the Tatshenshini-Lower Alsek River passes numerous 10,000-foot-plus peaks and deep, glacier-carved gorges. It also provides access to what used to be some of North America’s most incredible, undiscovered big mountain freeriding terrain.

Until these guys showed up: Wade Simmons (the Godfather), Darren Berrecloth (the Legend), Tyler McCaul (the Millennial) and Carson Storch (the Kid). And if unleashing four generations of MTB mayhem on a 14-day floating, sightseeing tour for rich tourists sounds like an odd match, it’s because I forgot to mention the helicopter.

“It was surreal,” says Wade Simmons. “Floating down one of the top five river trips in the world is incredible enough, but to then be picked up by helicopter to window-shop for lines anywhere you want?!”

At 24 years old, Carson Storch found himself on his first big expedition, doing his first ever heli-drops, and sharing it all with a personal hero. “I’ve looked at Wade’s mug on a poster at my local bike shop since I was 12 years old,” Storch says. “So, on an epic expedition with him… I never would have expected this to happen as a young grom, to get to know and ride with the Godfather of Freeride.”

One of the pioneers of the sport (see page 28), Simmons was excited to pioneer new terrain. Other than the original First Nations inhabitants, very few – if any – humans have even stepped foot on some of the mountain slopes and ridges they accessed, there’s no doubt they were the first to ride it.

“The terrain was endless,” Storch says, “and we ended up deciding to go with high alpine stuff. For the most part, it was perfect dirt/shale faces and ridges, but some of the lines were deceivingly rocky and pretty damn steep.”

“As freeriders, we apply our skills to the landscape,” adds Simmons. “You go in with no expectations and decide how much you want to leave on the hill on any given day. This time, Darren put it all out there.”

Darren Berrecloth is known as a jumping and competition slayer, but according to Simmons, “He tapped into the gnarliness out there, really pushing the limits of and dropping into stuff where the severity was: ride it out and there is no other alternative. It was impressive, like he found his calling.”

Of course, those three-days of heli-drop shredding were offset with 11 days on the river, where high-adrenaline moments took a backseat to serenity and natural wonderment.

“I honestly expected the river to be a bit gnarlier,” says Carson Storch. “Although we did have our moments of sketchiness, like almost getting sucked into a whirlpool. The floats were definitely not like the riding we did, but it made for a nice balance. It’s true wilderness and being up there made me respect Mother Nature that much more. You’re at the mercy of the elements when you’re that deep in the bush.”

For Simmons, the peace and slow pace of the river was equally satisfying.

“It was great to be taken out of our daily life and cut off from the world. To be able to hang with these guys and shred with them at the height of their careers was pretty special. We made stories for life. Part of being a conscious human, I think, is a desire to pass the torch. This trip was a dream – life is always surprising me, you never know what is around the corner.”

The Tatshenshini Movie, produced by Freeride Entertainment and Red Bull Media House, is slated for release sometime this autumn.