After the Canadian premiere of Blood Road at this year’s Whistler Film Festival Adventure Series, the producers of the documentary, which follows the journey of ultra-endurance mountain bike athlete Rebecca Rusch and her Vietnamese riding partner, Huyen Nguyen, as they pedal 1,200 miles along the infamous Ho Chi Minh Trail, are releasing behind-the-scenes footage of the journey and making of the film.

Watch as Rusch and Nguyen attempt to reach the crash site and final resting place of Rebecca’s father, a U.S. Air Force pilot shot down over Laos over 40 years earlier. During this poignant voyage of self discovery, the women push their bodies to the limit while learning more about the historic ‘Blood Road’ and how the Vietnam War shaped their lives in different ways.

From the Facebook page of Rebecca Rusch: “The Cave: it was physically the most demanding part of the trip and also the most frustrating for me. I was worried about the bikes surviving, had no idea how long the cave was, if we’d be in there 9 hours or 9 days. I had to rely on all my experience as an athlete including rock climbing skills, knot tying, whitewater experience, medical training and extreme patience… Yes the bikes and gear survived. Neil Goss won the award for most bug bites, but Nicholas Schrunk and I went home with parasites, so not sure who’s the real winner there. At least we got out and didn’t have to spend the night in there.” 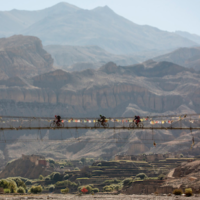 FINDING FREEDOM IN THE FORBIDDEN KINGDOM: A HIMALAYAN BIKE-PACKING ESCAPE
Step, step, breathe. Step, step, breathe. Breathe. BREATHE. Leaning against my handlebars, my eyes draw level with the surrounding peaks. I struggle to keep moving as I carry my loaded bike up the last few hundred metres to Thorung La Pass. I’m 5,416 metres above sea level, it’s October in the Himalayas, and I still can’t get her words out of my head … “We need to talk.”… Read more