The Sea-to-Sky is home to a long list of dramatic peaks that watch over our valleys. Lucky for us there are countless ways to explore them. One of the more popular alpine access hikes in the area is the Joffre Lakes trail. My first experience in the zone was on an overnight camping trip with my 5th grade class from Signal Hill Elementary in Pemberton.

Our teacher had made a deal that if more than half of us dunked in the frigid water at the third lake, then he would as well. This was great incentive to take the plunge and cool off after a hike that seemed to take forever with our loaded packs and young legs. The bonus factor of seeing our teacher drenched in ice cold water made for some good laughs all around. 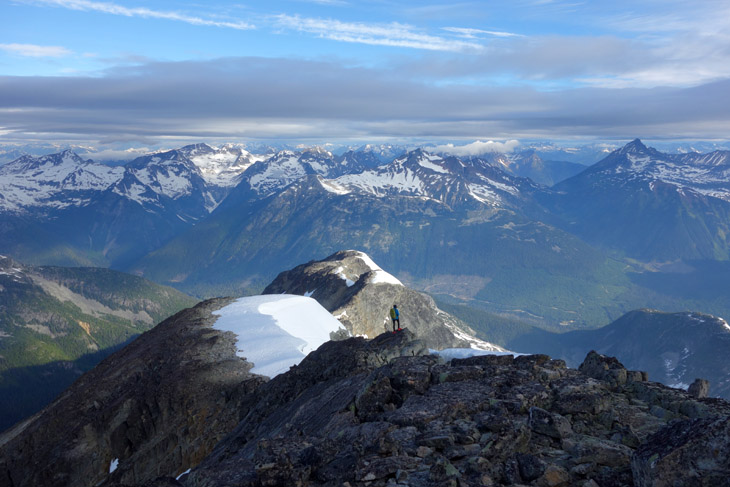 Due in part to heavy exposure on social media in recent years, the straightforward hike is a popular route for people of all ages who want to get a taste of the alpine environment and inevitably take their own version of the log selfie at second lake. I’ve enjoyed many great days climbing, skiing and camping in the area and it always makes me happy to see others enjoying the beautiful surroundings and appreciating nature. 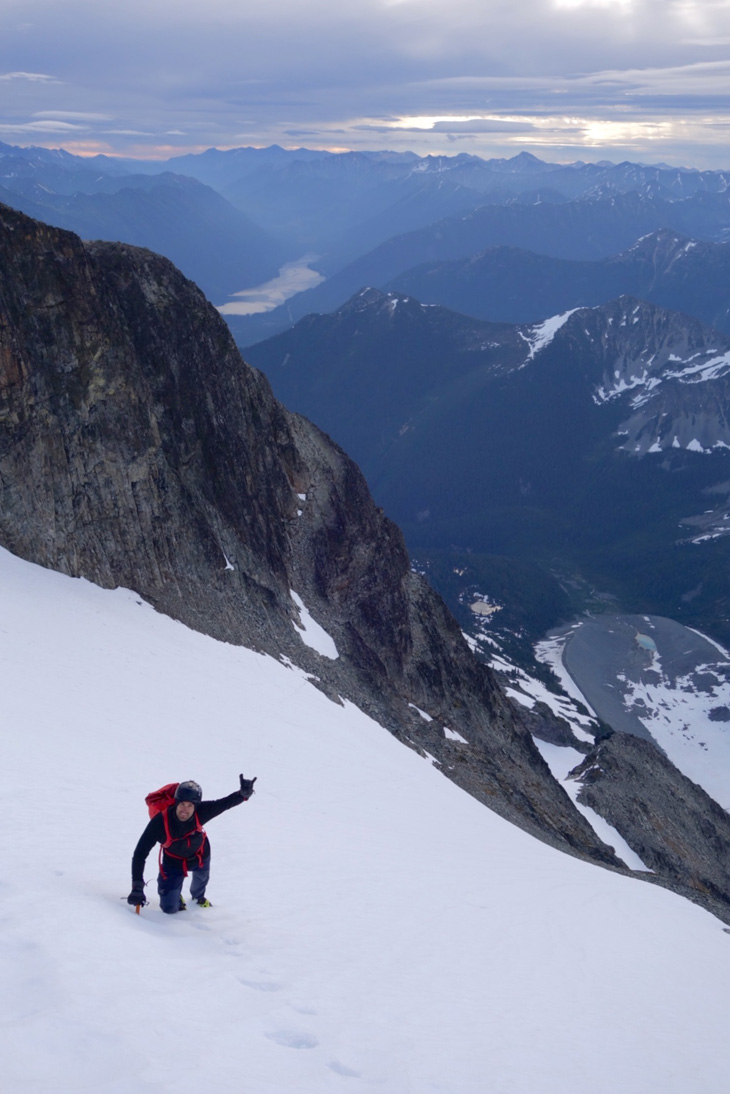 Since learning to paraglide five years ago, I’ve been looking at the mountains with a different perspective. Many new objectives have been added to my bucket list and this June my good pal and Arc’teryx team mate Jason Kruk and I decided conditions were as good as they’d get for a hike and fly mission from the summit of Joffre Peak. 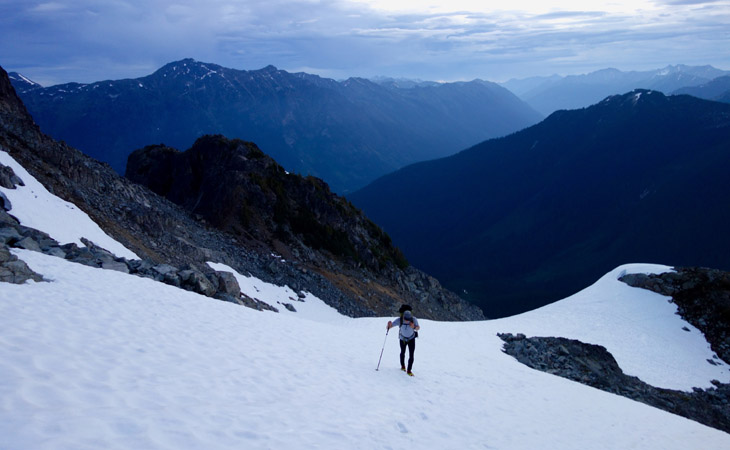 In true alpine start fashion, I left my house at 1:30 a.m. I rolled through a police road block and baffled the officer when I told him that the only thing I’d been drinking was coffee, and in fact I was getting a head start on hiking in the Joffre zone. Priceless. 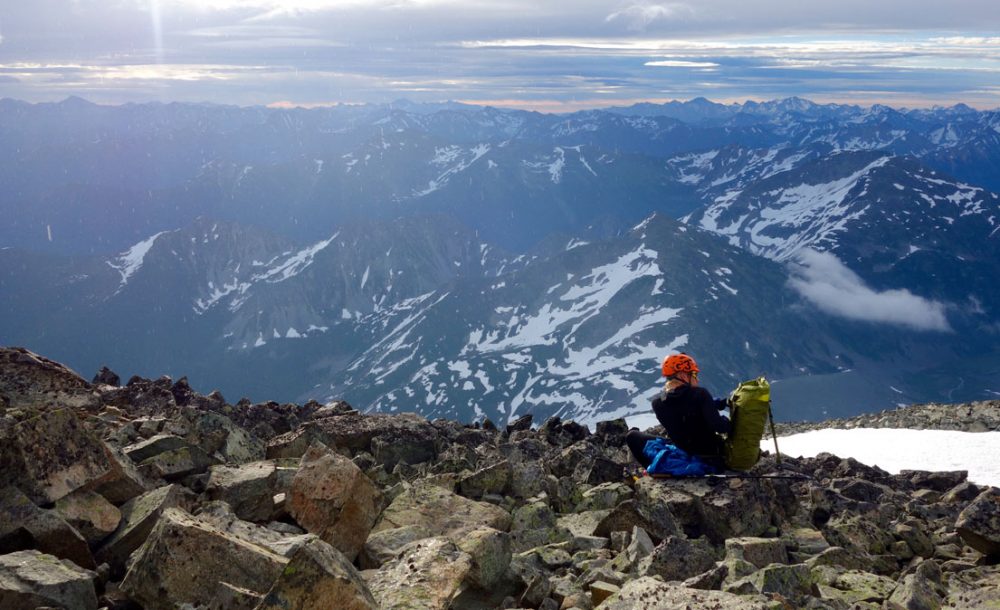 Advancements in lightweight flying gear and our own experience travelling efficiently in the hills allowed us to attack fast and light. After a speedy ascent of the Cerise Creek trail, we reached tree line on the ridge to climber’s left of the Anniversary Glacier. Just as we prepared to transition to our shoe crampons and have a quick refuel, a menacing cloud passed overhead and released a rain cell that made us pause and evaluate the current weather situation. The skies looked clear and pleasant to the west so we decided to continue on.

An hour or so later we watched the sun rise as we kicked careful steps into the sun cupped neve on the South East face. The snow conditions were ideal in that it was just soft enough for good penetration which resulted in a solid purchase as we steadily worked our way up the steep and exposed terrain. After some fun rock scrambling and a casual push up the final snow patch, we topped out at 2,721 m just after 5 a.m. 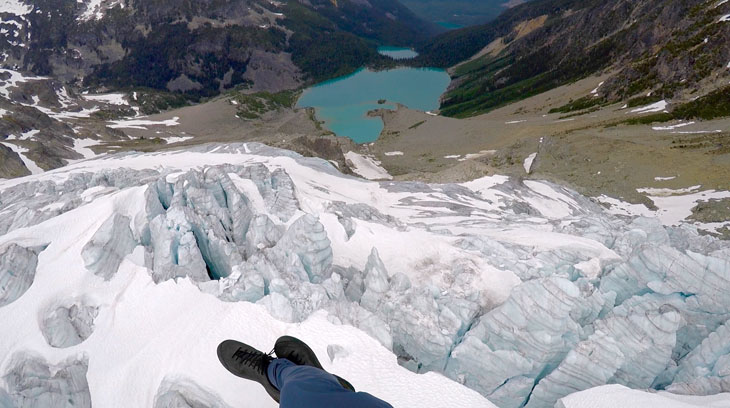 It became evident that winds weren’t lining up perfectly to launch the true summit, so we carefully traversed some solid alpine granite and made our way to a nice flat spot near the top of the North Ridge. We had planned to glide over Chief Pascal and back to the Duffy Lake Road where my truck was parked, but I wasn’t sure I’d make the glide on my 9.5 m speed wing. I decided to alter my flight path and head West over the Matier Icefall (a line that I’d had my eyes on since I began flying).

By this time, our blue sky had disappeared once again and our window of comfortable launch conditions seemed to be closing. Jason got off first on his 10 m and instantly rocketed up and over the ridge and out of sight. I lifted my wing in strong winds and took a few ginger steps on the blocky rocks before lifting off and and flying straight out towards Slalok.

The air was a bit turbulent during the first part of the flight, but my speed wing penetrated easily as I turned and burned towards the lakes. Cruising over the serac and staring down into the deep caverns of the glacier made for incredible visuals that will undoubtedly be etched in my mind for years to come.

After a speedy descent of the glacier I landed on a small patch of snow just above the third lake. I bounced my shin off a cheeky rock on the technical landing but other than that it was another successful flight. After scanning the area I didn’t see any sign of Jason so I got on the radio to see where he had made it and was amused to hear that he had completed the glide back to the road and would pick me up at the parking lot. 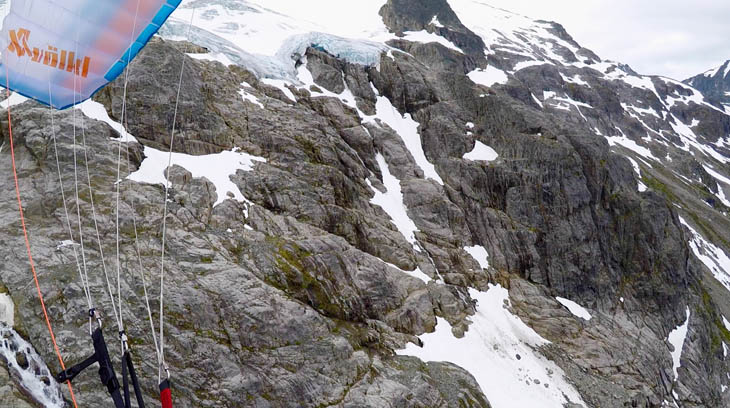 I stuffed my wing into my pack and took a few minutes to take in the epic vistas and reflect on a solid morning of climbing and flying. To me these adventures are about utilizing a specific mental and physical skillset, and then applying it to experience the natural world in unique ways. The planning, preparation and execution of these missions—and knowing that we’re a part of a very small group of people who do this—are what keep me intrigued and always looking forward to the next outing.

On the way down I passed lots of enthusiastic hikers along the trail and with each smile and “good morning” I thought to myself, “Yes, yes it is.” There was a lineup of people waiting to make their way out on the selfie log at Second Lake and I even passed a group of about 20 Spanish speaking teens with matching shirts. I couldn’t help but wonder if their teacher would also be getting immersed in the brisk glacial runoff that day. 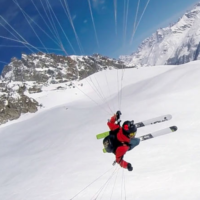 BEHIND THE PHOTO: AUSTIN ROSS “THERE ARE NO TRACKS IN THE SKY.”
The world is oversaturated with GoPro/POV shots and it takes creativity to stand out, but a speed-flying rig is a good start. Born-and-raised in Pemberton, Austin Ross grew up exploring the Coast Mountains as often as possible and by any means necessary. His POV edits consistently rank among the best of the year, so we connected to talk airtime, hang time, and getting the shot… Read more 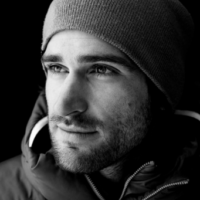 Born and raised on a hobby farm in B.C.’s Pemberton Valley, Austin Ross quickly fell in love with the mountains. Under the craggy peaks of Mt. Currie, his tight knit family instilled in him a deep desire to explore the natural world, embrace creativity and follow his own path… Read more