I roll over on the couch I’m sleeping on and answer. Mountain Life editor Feet Banks informs me that climber/mountaineer/writer Fred Beckey is in Squamish filming for the documentary Dirtbag: The Legend of Fred Beckey and heading out to climb a few local cracks. Feet knows I’ve climbed with Fred a few times in the past. I know this is one of those calls you have to say yes to—Beckey is 93 years old and an absolute icon. I slide off the couch and head for my truck, already a step ahead of the game because I slept in my clothes.

When the word “dirtbag” is used, it conjures images of someone living a minimal existence on the fringes of society. Someone possessed by an uncontrollable urge to pursue useless endeavours—skiing, climbing, biking, dancing, drinking, drugs, etc.

Born in Germany, but raised in the Pacific Northwest, Fred’s uncontrollable urge was to climb mountains. He has committed his life to the pursuit of adventure and has more lifetime first ascents than any climber on the planet. He never married or had children, instead Fred’s life path led him in a single direction: up.

The author of numerous guides and books relating to the mountains and their geology, Fred is revered for his mountain knowledge. For a dirtbag, he is well read, well educated, and well worth jumping at the chance to spend an afternoon with. So, I roll off the couch, make coffee and do dishes for the lads (a crucial tactic for any discerning couch surfer), then throw on my pack and head for the Squamish Smoke Bluffs.

“Unshaken, Beckey settled in… there was plenty of rock for everyone.”

Fred has a longtime connection with Squamish. In the spring of 1958 he began hearing whisperings of an amazing granite monolith at the head of Howe Sound, but the only access was to take a ferry from Vancouver to the Britannia Mine, then lead packhorses to the isolated town of Squamish. Down in Seattle, Fred waited out the summer, knowing that a road was due to open the next spring. He was one of the very first people to travel the new road up to Squamish.

“The road was absolutely hairball,” Fred says. “I mean REALLY scary, but when you came around that corner . . . WOW.”

Much to his chagrin, Fred arrived at the Stawamus Chief to discover that Dick Culbert had beaten him to the punch and taken the ferry up the previous summer. Unshaken, Beckey settled in… there was plenty of rock for everyone.

I didn’t meet Fred until the mid 1990s in Whistler. I was living with Johnny “Foon” Chilton, Chris “Cupcake” Kettles and Jeff “Rasai” Kinash in “The Alpine Way House,” a run-down shack that would churn out skiing and climbing missions the way a pizza joint sends out pies.

We kept the house tidy and clean, but it still reeked of empty beer cans, dank polypro, lost jobs and wasted careers—it was a place of action and adventure ALL the time.

So, it’s no surprise Fred Beckey showed up at 3:00 a.m., pounding on the door and sounding like a cross between a parrot and a wounded badger. We let him in, made him a cup of cocoa and settled him on the couch. He drifted off, mumbling something about candy bars and hand jobs. Fred is not known for holding back on his thoughts, even when asleep apparently.

Back in the present, I arrive at the Squamish Smoke Bluffs and recheck my backpack to ensure the six-pack is still within. Shortly after, longtime local skier/climber and infamous Fred-fi xer, Mike Duffy, arrives with Fred. We gear up and head for Cat Crack (5.7), one of Fred’s favourites. At 93, Fred has the land speed of a sloth for the

approach, but he moves with the tenacity of a young mountain goat. Our goal is to climb the crack a few times and get Fred ready for when the film crew arrives to shoot the Squamish chapter of Dirtbag: The Fred Beckey Story.

“Fred didn’t like the name for a long time,” says Dave O’Leske, the film’s director, when I reach him by phone from his editing suite in Telluride.

The Dirtbag film has been more than a decade in the making and O’Leske has spent enough time with Fred over the years to see into his bag of tricks. “I think we used the word dirtbag to lure people in,” he says. “Once they see it, they won’t believe what an amazing life he’s had exploring the mountains of the world.”

Back in Squamish, we spend most of the afternoon getting Fred to the base of the

climb—he even throws down a few naps along the way (remember, he’s 93 years old!), but we arrive eventually. And then something amazing happens: Fred ties in to the rope, leans forward, grabs onto the crack with his gnarled bent hands and levitates upwards with the ease of someone who’s spent a lifetime playing in the vertical realm.

Duffy and I watch in wonderment as Fred flows up the granite. It’s pure inspiration and rattles my emotions enough that, afterwards, I forget Fred’s rope at the top of the climb (later retrieved, sorry Fred)!

Fred Beckey comes from the Jack Kerouac era and a generation inspired by stories of the open road, or exploration. Instead of just enjoying the stories, Fred made his own, living a life less ordinary in order to perpetuate this exciting new adventure called mountain climbing. Inspired by the big walls of the world, and especially the jutting peaks of the Pacific Northwest Cascades, Fred is the king of fi rst descents and a living example of the value that awaits on the road less travelled.

Shambling back from Cat Crack, I keep trying to pull a nugget of dirtbag wisdom from one of the greatest adventurers I’ve ever met. “Fred, do you think life is about risk over reward? Does the real fun start when the plans go to shit? Should we all give up the idea of a good career and a solid relationship? Should we ditch our

material possessions and just focus on living a long and fruitful life in the mountains?”

He doesn’t answer at first—tired from climbing perhaps, or letting me stew in my naivety maybe—but eventually, Fred nudges me, grins, and says, “You bet.” 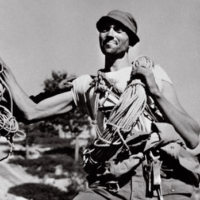 WHEN STONE SPEAKS: IN THE HISTORY OF BIG-WALL CLIMBING, EVEN GEOLOGY HAS SOMETHING TO SAY
“Every rock has a story,” my kid announces suddenly. He’s three. He speaks mostly gibberish. But the poet Anis Mojgani nailed it when he said that three-year-old gibberish is actually half-nonsense and half-god. I stop in my tracks. “That’s true, love. That’s absolutely true.” He hasn’t even seen the book. It’s not one that you let three-year-old hands touch…. Read more 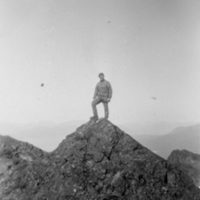 MOUNTAIN LIFER: PAUL RUSSELL—SEASONED MOUNTAINEER
Paul Russell is a seasoned mountaineer with a wealth of stories to either chill your blood or make you laugh out loud. He’s serious about mountains and has some impressive items on his bucket list – like summiting a peak over 20,000 feet, completing the 298-kilometre Waddington Trail from Tatlayoko Lake to Bute Inlet, B.C., and climbing the Stawamus Chief when he’s 80 years old… Read more