The venerable BC Bike Race celebrates 10 years of singletrack destruction with a new film ‘TEN’. Follow racers, organizers, volunteers and fans as they charge through BC’s largest singletrack cycling event.

From BC Bike Race: Our new movie, TEN, follows our racers and crew alike through the best week of their lives as we celebrate their dedication and hard work. TEN is a feature-length film that celebrates our culture by telling the story of the race both on the dirt and behind the scenes. Sit back, grab a beer, and enjoy – you’re going to like this one. 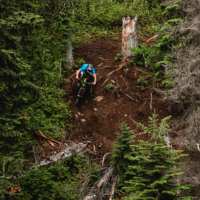 UNDER THE RADAR: FIVE OTHER BIKE PARKS TO CROSS OFF YOUR BUCKET LIST
There will always be the best-in-show, unmatched and unrivaled bike parks of the world garnering media coverage and attracting throngs of salivating cyclists to their peaks. But there are also the underdogs, the come-from-behinds and the diamonds in the rough. The ones we love to cheer for, that we keep a special place for in our hearts and proudly call our home parks… Read more