Danish nature photographer and International League of Conservation Photographers (ILCP) member Morten Hilmer travels to the Arctic to photograph the extreme environment and vulnerable nature in these remote parts of the world. This short film is a teaser to Hilmer’s new book Silence of the North. 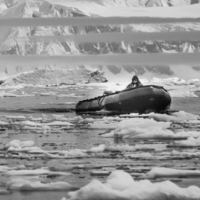 STUDENTS ON ICE: GOING TO THE ENDS OF THE EARTH ON OUTDOOR EDUCATION
Leaning on the railing of their 85-metre ship, a group huddles in jackets, hoods up, watching massive glaciers glide into focus. Ice floes dot the ocean where penguins swim effortlessly through icy waters. Suddenly, through thick fog loom the snow-capped mountains of Antarctica’s Elephant Island—the frigid outpost where 22 men from explorer Sir Ernest Shackleton’s ill-fated HMS Endurance expedition sheltered for four months in 1916 before being rescued. Today however, the island is a classroom for the Students On Ice research program…. Read more