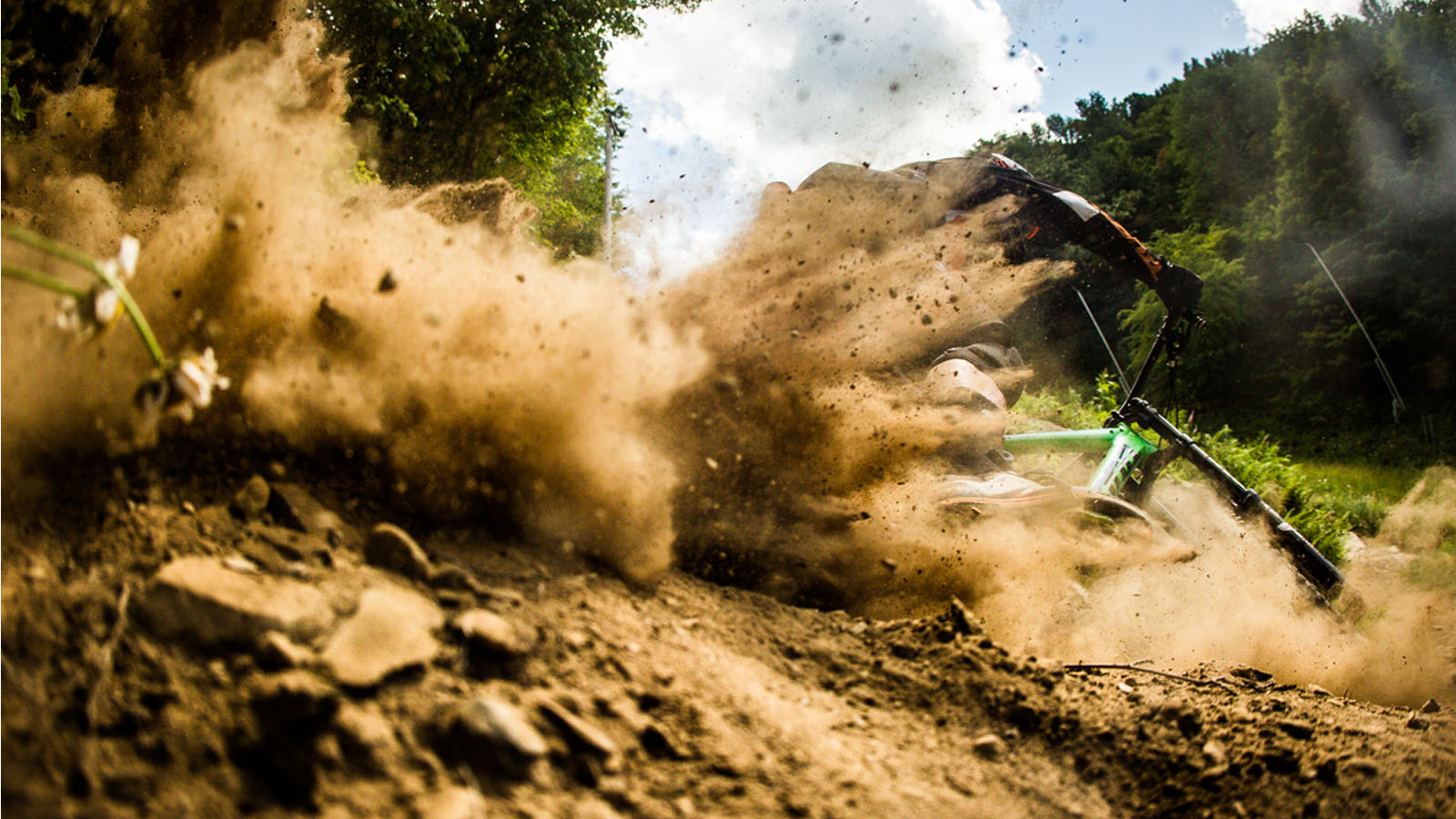 Under the Radar: Five ‘Other’ Bike Parks to Cross Off Your Bucket List

There will always be the best-in-show, unmatched and unrivaled bike parks of the world garnering media coverage and attracting throngs of salivating cyclists to their peaks.

But there are also the underdogs, the come-from-behinds and the diamonds in the rough. The ones we love to cheer for, that we keep a special place for in our hearts and proudly call our home parks.

It’s with this spirit we contacted numerous notable mountain bikers, industry heavies as well as novice locals coast-to-coast to help compile a list of five mountain bike parks flying under the radar. What these bike parks lack in size, elevation or hype, they more than make up for in quality, character and grit.

When planning your next mountain biking destination, it might be high time to think outside the box and stray from the beaten path. Here are five under-the-radar bike parks worthy of your attention.

A worthy stop along the stunningly scenic Cascade Loop, Stevens Pass is located 125 km east of Seattle, up the Skykomish Valley between Everett and Wenatchee.

Officially opening for downhill riding in 2012, the resort was the first to bring lift-access biking to the Pacific Northwest. This year, Stevens Pass submitted a plan to build phase three of its growing and respected trail system. The plan will see more than 20 new trails built in a zone accessed by Skyline, a high-speed quad, and Brooks, an older lift.

“Our goal is to have three [trails] built by the end of next summer,” says Joel Martinez, Vice President of Operations at Stevens Pass. “One is going to be a double-black diamond, our most technical, but there will be a mix of everything—double blacks, intermediate and easy terrain.”

The proposed trails will weave through the current network and provide connections within the existing system.

More than just great terrain, Stevens Pass fully embodies true mountain bike culture, hosting a steady stream of events, races and workshops throughout the summer. Home to the NW Cup finals, Stevens Pass is the last stop of the premier downhill series in the Pacific Northwest. And the annual Turn N’ Berm Festival packs in three days of festivities, including the Cascade Classic downhill race, amateur races, pixie bike madness, live music, camping, and a variety of competitions through the weekend. The resort even offers free RV and tent camping for the weekend.

With an extensive mix of flow trails, a skills park that includes unique wooden features, along with extended hours, short lineups, affordable lift tickets and that intimate vibe you’d expect from a smaller Northwest resort, Stevens Pass should definitely be on your list of resorts to check out this year.

“Stevens pass is the first resort in Washington to make the most of summer with a lift-accessible bike park. The trail network keeps growing, and it draws in people of all abilities, pros included, to enjoy the riding and amazing scenery. We are lucky to have a training spot so close to home and get in 10-plus runs in an afternoon without hardly waiting in line. Leavenworth is also pretty fun spot to grab dinner and maybe session the new Velosolutions Pump Track, which is also world class.” —Jill Kinter, Three-time mountain bike World Champion; Olympic bronze medalist, BMX

Silver Star Bike Park has built an insider’s reputation as one of the top bike parks in Western Canada, in part due to the guidance of bike park director Cam Sorensen. Sorensen, known locally as the “Godfather of Mountain Biking” designed a progressive park with everything from beginner trails to expert runs filled with berms, tabletops and a ton of wooden features.

Located a short drive from Vernon, BC, Silver Star is known for its superbly maintained, fast and flowy trails (like Super Star, Pipe Dream and Pro Star), but also serves up the steep and tech (try Downtown, Gnar and Dag’s).

Unlike busier parks, Silver Star is a relatively unknown diamond in the rough, where riders can enjoy world-class runs without long lineups and crowded trails. And the Comet Six Pack Express is Canada’s largest mountain bike lift, taking bikers to 488 vertical metres of great terrain in less than eight minutes.

Possibly the most attractive and unique feature of Silver Star is that all the downhill runs are top-to-bottom, distinct trails, rather than short stretches intersecting logging roads. The park has more than 50 km of dedicated mountain bike terrain, over 600 berms and more than 300 jump features. Its longest run is the 7 km Paradise trail, a wide, hard-packed track from mountaintop to village. Also watch for expanded cross-country trails when Beowulf comes on line next year.

Silver Star is also a great place to learn to ride or improve your skills. Freeride legends Matt Hunter and Thomas Vanderham have held their Elevate Mountain Bike Camp here for years, often bringing other pros in to help with clinics. As one of only a handful of bike parks around the world to be named an IMBA Ride Centre, Silver Star is a true world-class mountain bike destination.

“It’s in the dirt! The amazing soil on Silver Star Mountain has allowed us to build one of the most progressive bike parks on the continent. It gives us the opportunity to shape the swimming pool sized berms we are known for, with vertical lips and smooth transitions. We have tech trails with rocks and roots when you want them, but people come here to flow smooth jumpy trails. And the village atmosphere is so unique you will never forget it, the vibe in the lift line is high fives and smiling faces, and the trail crew is always working on trails even when the park is coming to a close. When you leave Silver Star Bike Park you will be better at cornering your mountain cycle and lighter on your wheels from the friendly encouragement of other bikers.” —Cam Sorenson, Silver Star Bike Park Director

The benchmark for mountain biking in Quebec for over 25 years, Bromont serves up 42 km of lift-access trails, ranging from beginner to pro.

As home of 2008 and 2009 World Cup events, Bromont Bike Park is known for having some of the best expert-level, gnarly, technical flow riding in Canada. Recently, the resort has introduced a beginners’ trail network to appeal to a wider range of skills. The new trails, while more friendly to novice riders, also offer plenty of features to keep experienced riders entertained.

One of the only mountains offering lift-access in the area, Bromont is chock full of rocky, tech trails but also has manicured berms on many top-to-bottom runs. The 12-member trail crew recently added some new rollers, jumps and berms, and plans to build more in the coming year.

With three full weekends of downhill and enduro races, Bromont keeps both riders and spectators entertained during the summer months. The resort also offers beginner packages that include lift ticket, bike and gear rental, and a lesson.

With 600 metres of vertical drop, 20-plus trails, two lifts operating during the weekend, and a copious amount of cross-country trails in the area, if Bromont isn’t yet on your radar, it really should be.

“It’s quite a privilege to have access to so many trails with as many levels of difficulty as there are users, right at our doorstep. I don’t think enough people know about it yet. But they should!” —Jonathan Allard, former Mechanical Design Engineer, Xprezo Cycle

After a three-year hiatus, Vancouver Island’ s Mount Washington recently jumped back in to the lift-access mountain bike game.

With flowy trails for all levels of rider, an Island vibe, and stay and play packages, lessons and group rides, Mount Washington is quickly becoming a go-to summer destination for active families and die-hard mountain bikers alike.

On top of the great riding, Washy is also a shining display of Canada’s West Coast beauty. With spectacular views that span the Island’s majestic mountain ranges to the waters of the Pacific, it’s worth a visit for the vistas alone. Add to that an extensive network of downhill trails that range from fast and flowy to steep and technical singletrack cut through hemlock and yellow cedar forest; Mount Washington is a true West Coast mountain bike experience.

“We are taking a little different approach to the trails this year based on changes in mountain bikes and riding techniques which have occurred just over the past few years,” says bike park manager Mike Manara. “We will have a number of new or renovated downhill trails plus 10 km of cross-country mountain biking trails, and they will all have a smoother flow from one feature to the next and be more integrated into the terrain than in the past. It’s all about fun and flowy.”

“I’m really stoked to see Mount Washington back in the bike park game. To Mount Washington’s advantage, re-opening a second time, they can observe what other bike parks have done and take note of what works and what doesn’t. And they’re doing a superb job. The bike park has some unique terrain and a great variety of trails, and the trail crew is experienced enough to tap this potential. It is a refreshing and satisfying destination for the whole family with a small town vibe and big time shredding.” —Wade Simmons, former Red Bull Rampage Champion and Hall of Famer

DNA
TRAILS 41 (8 Green, 16 Blue, 11 BD, 6 DBD)
TOTAL TRAIL LENGTH 41 km downhill
LIFTS 1
SKILLS PARK Yes
TICKET $45 (CDN)
RENTALS Yes
LESSONS AND GUIDES Yes
SLOPESIDE LODGING Yes
MUST HIT TRAIL Sweet One
For those who like narrow singletrack with bridges over creeks and log rides, Sweet One is a double black diamond that will keep you on your toes. Not to be taken lightly, but also not to be missed (if you’re up for the challenge).
WEBSITE sunpeaksresort.com

The Sun Peaks Bike Park in B.C.’s Monashee Mountains near Kamloops, dishes up over 600 metres of lift-accessed vertical with 41 distinct trails ranging from flowing machine-made to fully pinned downhill—not to mention the recent addition of numerous cross-country options.

Host to the Canadian National DH Championships for three years in a row, the 2012 BC Cup and the 2013 Canada Cup, Sun Peak’s terrain in nothing short of world-class.

The village is bike friendly, with many patio or lakeside chilling options, and with slopeside lodging, it’s a quick pedal to the shower before dinner.

Although Sun Peaks is primarily known for its classic singletrack trails, recent years have seen the advent of machine work in the park. The result is heaps of fast and flowing freeride trails, loaded with hits and berms from top to bottom. There’s even a dirt jump park right under the chairlift, with features ranging from beginner tables to giant doubles.

If cross-country is more your vibe, the Altitude trail traverses alpine meadows, forests, and the peaks of Mt. Tod. You can even lock up your bike and hike a short 1.5 km to the summit before moving on to Tod Lake. The trail then links up with the 11 km Big Rock Ride for a 595-metre descent back to the village. 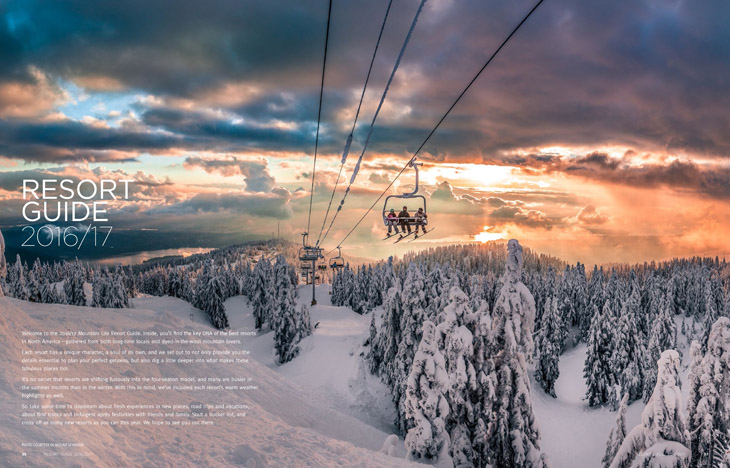 From the 2016/17 Mountain Life Resort Guide your ultimate resource for resort-based travel and adventure. In our follow up to last season’s inaugural release, you’ll find more in-depth coverage of the best resorts in North America, an expanded Cat & Heli section, and more mountain bike park profiles. We’ve also included international travel for those looking to really get away. Find the new Mountain Life Resort Guide at your favourite specialty retailer, by digital subscription or on newsstand coast-to-coast.