Hut life is good life: these sanctuaries are a way to access the otherwise inaccessible, to escape to the hills from the less-mountainy aspects of our lives; to unwind and relax; or to gear up for a proper adventure. Each carries a nuanced history, the result of fanciful idea coupled with a substantial dose of tenacity. From the simple and rough to the elaborate and beautiful, these huts don’t build themselves.

Hut makers are strange and unruly dreamers, they’re pragmatic workers willing to shoulder the heavy administrative and labour-intensive burdens required to bring their visions into reality. David Scanlon is the mind (and muscle) behind the British Columbia Mountaineering Club’s newest hut at Watersprite Lake. Arriving in BC in 1977 as a single father of two, Scanlon spent as much time as he could muster in the hills, and soon fell in with the BCMC. “It worked out really well,” he recalls. “Here was a whole new group of people who loved doing what I do.”

Scanlon led numerous trips with the club: into the Columbia Icefields, the Bendor Range, the Stein Valley, Mount Logan, the Wapta Traverse, as well as many local Sea to Sky spots. Over the years, he noticed many of the club’s backcountry huts had fallen into serious disrepair so he began arranging multi-week trips for hiking, climbing, and hut repair. The Plummer Hut in the Waddington Range and the North Creek Cabin, beyond Birkenhead Lake, both received treatment.

In 2006, a day hike in the Squamish area triggered something with Scanlon—the beginning of what is now the complete Watersprite Lake Hut. The aesthetic new construction is perched at the edge of Garibaldi Park in the Mamquam drainage, overlooking Watersprite Lake and out to Dreadnought Peak.

Through the BCMC, Scanlon obtained tenure in 2009 to build a mountaineering cabin and outhouse at the location. While the superfluous bureaucracy involved with building huts on public lands definitely caused him to shudder, Scanlon is the kind of person who sees what needs doing and then does it. He navigated the forms, signatures and phone calls required by the province, and garnered suffi cient support within the BCMC to actually complete the project.

By 2016, ten years after inception, it was on. Scanlon put in 78 days over 18 trips up to the lake: repairing the trail, digging holes for pilings, packing loads for heli-transport, sawing, hammering nails and organizing the efforts of volunteers. Last summer, he completed the project. Its beautiful arched beams and red roof accent the green-blue of Watersprite Lake, bringing smiles to the faces of backcountry enthusiasts.

“In retrospect, after being an executive member for these past 15 years and serving four years as president, I have to say that getting the Watersprite Lake Hut built has been by far the most difficult, trying thing I’ve done,” Scanlon says. “And by far the most satisfying.”

Despite the accomplishment, Scanlon points to the efforts of the many volunteers who helped with this project, over his own energy and leadership.

In the basement pub at one of the club’s monthly social events in Vancouver, he considers the question of what’s next, having laid this project to rest. He doesn’t mention a specific location, but talks about a few incredible spots that just might work for a backcountry hut. As these living rooms of the backcountry become more and more popular (and populated), it’s not surprising that the hut makers continue to look for new locations a bit farther afi eld, in which to locate the next sanctuary. 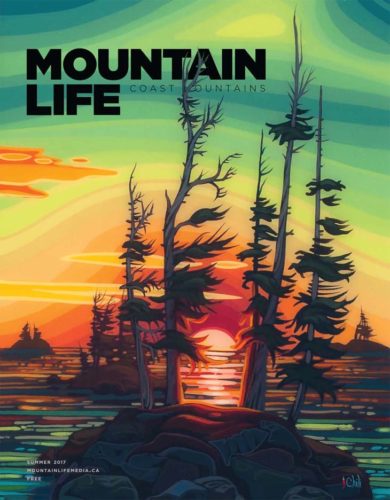 From the Summer 2017 issue of Mountain Life: Coast Mountains

The start of summer in the Coast Mountains always seems to bring us a bit more time. The extra hours of daylight allow us to maximize our days for sun, fun and socializing. It’s a time to take those big day-trips or dedicate a decent chunk of time to a patio or BBQ. Summer is also a good time to sit back and reflect on what kind of life we want, and how the hell we are going to get there… Read more