Novelist William Humphrey once quipped, “When I go fishing I want to get away from it all, for it is silence and solitude even more than it is fish that I am seeking.” 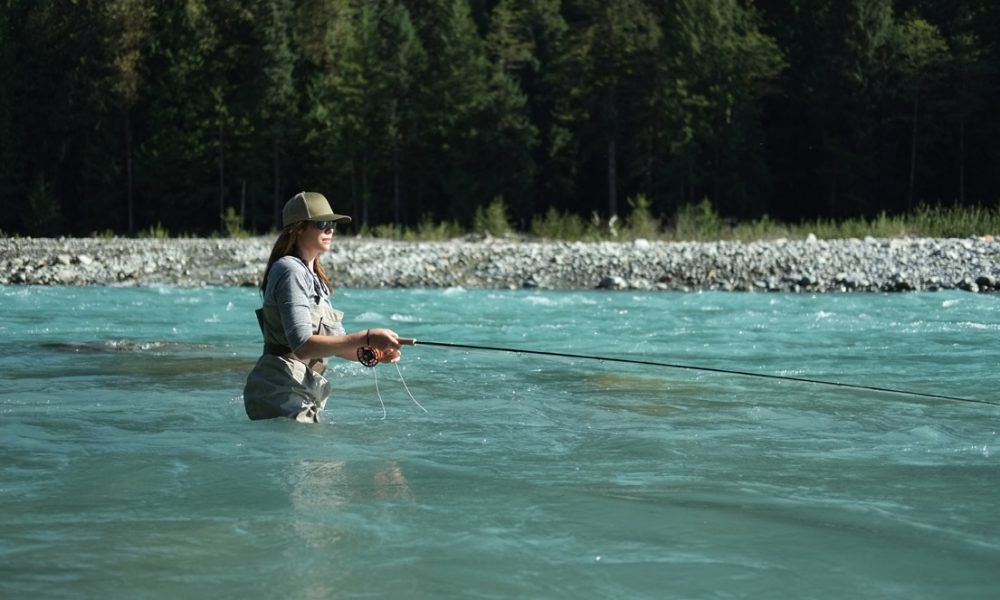 For many, this hunger for wild, remote spaces is what draws us to pick up a fly rod in the first place, but angling in the Sea to Sky area can often be (pardon the pun) a cutthroat endeavour. During the peak of a salmon run, tens of thousands of fish make their way up Howe Sound into Squamish River tributaries, attracting what at times feels like an equal number of sharp-elbowed anglers from near and far.

Over the past 20 years, I’ve used nearly every mode of transportation under the sun to find solitude and get my waders wet—truck, bicycle, boat, plane, train, motorbike, canoe, kayak, inflatable mattress—today, however, is my first time getting to the river by helicopter. And I couldn’t be more excited. 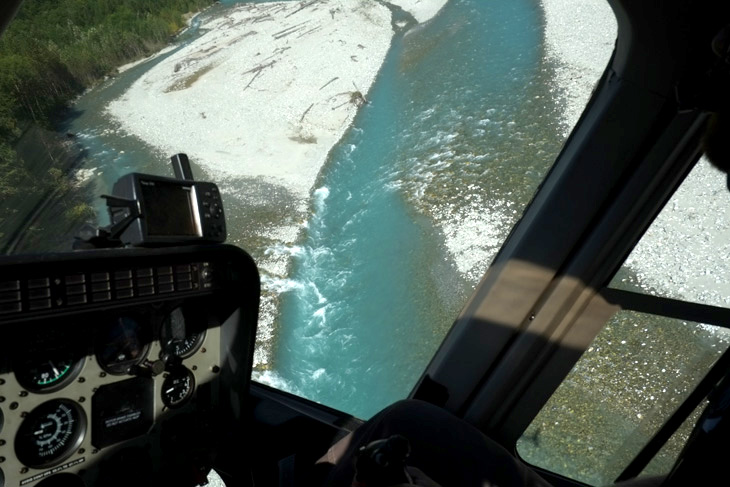 As the blades of the chopper thump rhythmically through the crisp morning air, Clint Goyette, a guide in the Sea to Sky for over 17 years and ninetime Canadian National Fly Fishing Championship competitor, reaches across the cabin to point out the scars carved into the mountainside by lava from the once-active Mount Garibaldi.

We bank sharply around a mountain ridge and lay eyes on the Upper Pitt River, a shade of silty glacial turquoise, glowing brightly. Goyette calmly motions to a school of salmon staging in a pool below us. With a broad smile, he signals the pilot to put the bird down. The old saying is that the worst day fishing is better than the best day at work—for Goyette, they are one and the same.

“Streams are getting more crowded,” he says, while rooting through a well-stocked fly box. “That pushes people further; it pushes people into helicopters.” Through Valley Fishing Guides, Goyette has been offering remote wilderness fishing via helicopter since 2001. “The helicopter allows us to get away into a river with less pressure, fewer people, and opportunities to catch larger fish.” 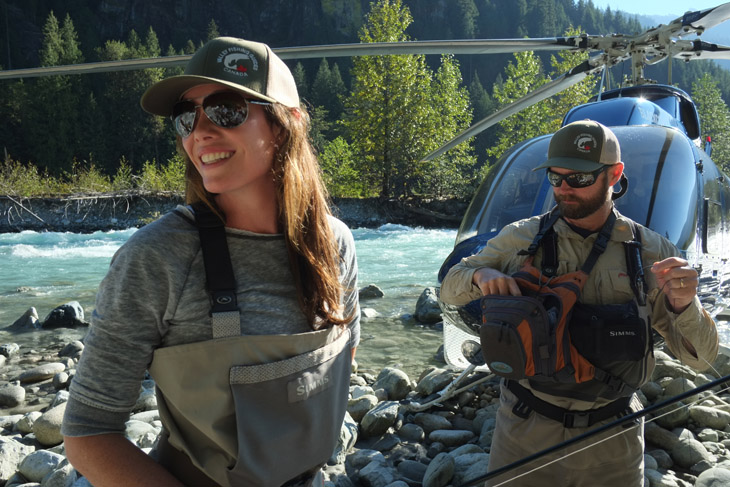 This stretch of Upper Pitt River is indeed remote. Fed by the Garibaldi Névé and Mamquam Icefields, the water branches out in veins of classic freestone streams from its headwaters in Garibaldi Provincial Park (where motorized transportation is banned) and snakes its way through ever-shifting gravel bars and swaths of evergreen and arbutus forests into the turbid Pitt Lake below.

Aside from kayaks and rafts, the unpredictable changes in the river channel mean access to the Upper Pitt is restricted to jet boat operators and heli pilots, resulting in very little angling pressure—a luxury typically afforded to more northern regions of British Columbia.

My excitement borders on giddiness. The Upper Pitt is known for having one of the largest sockeye migrations in the world, as well as solid returns of coho, steelhead and chinook. But with its strong resident populations of trout—including rainbow, sea-run cutthroat and bulls—the Upper Pitt is a worthy angling destination year-round.

I rig up an olive leech pattern in hopes of enticing the staging salmon, while Goyette helps another client refine her casting. “We take beginners through experienced anglers on all of our trips,” he says, patiently untangling a wind knot on her line.

“I like the intimate nature of sharing knowledge. It’s exciting for me to see that glow that happens when others get into a fish.” 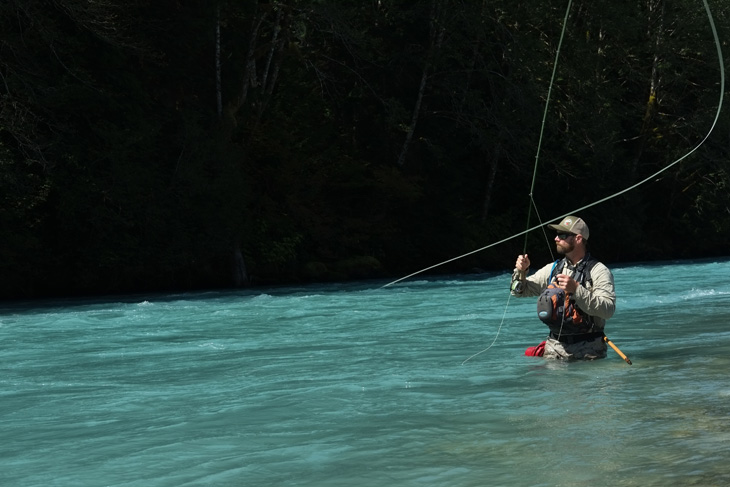 The only trace of civilization we see are two adventurous kayakers navigating the river’s shallow waters with mountain bikes strapped to their boats. Aside from kayaks and rafts, the unpredictable changes in the river channel mean access to the Upper Pitt is restricted to jet boat operators and heli pilots, resulting in very little angling pressure—a luxury typically afforded to more northern regions of British Columbia.

After working through the run, we hop back in the chopper and take off again to search for a more fruitful stretch of river. All told, we’re up and down over half a dozen times, window shopping for pools and sampling some of the best water I’ve ever chucked a Woolly Bugger into.

With my shoulders aching from a day of casting, I quietly reflect on this special day on the water. Before long, the tranquility is betrayed by hollering downriver. I recognize the welcome sight of a bent rod. Fish on. 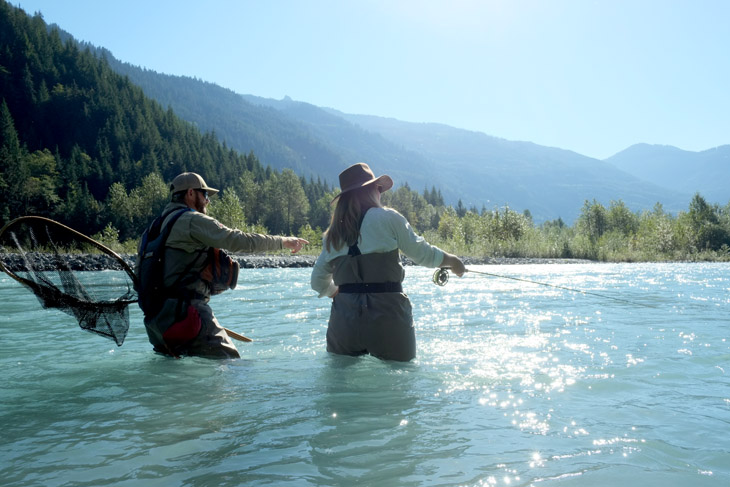 Goyette rushes to the scene and offers guidance to his client. After a spirited battle, a decent sized bull trout is to hand, then gently released, splashing its way through the cold water.

“Using a helicopter on the river doesn’t change an individual’s ability to be successful. Some days the fish will cooperate and some days they won’t,” Goyette says, drying his hands and offering a high five to the beaming angler. 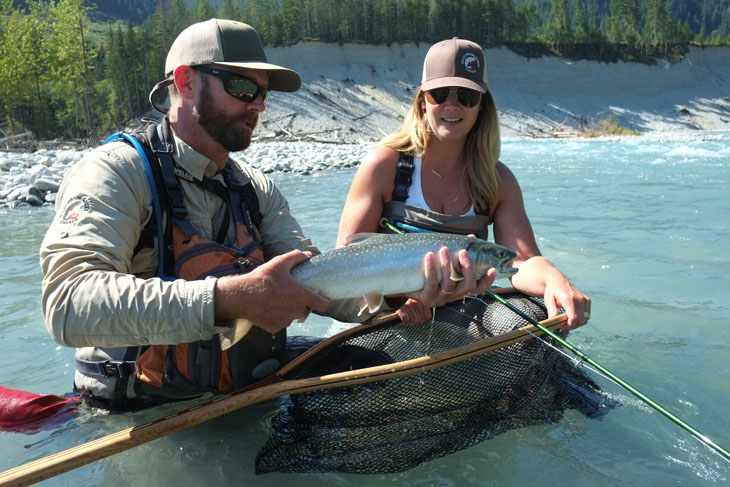 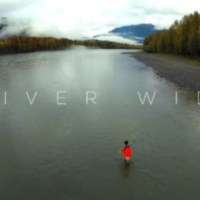 RIVER WIDE : AN UNCERTAIN FUTURE FOR SALMON & THE SKEENA RIVER
River Wide is a fly fishing film about the Skeena River and a current environmental issue that threatens the entire west coast salmon population; the Petronas (LNG) liquid natural gas facility on Lelu Island at the base of the Skeena River… Watch video 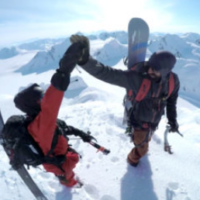 STEELHEAD AND SPINES: WILD FISH AND BIG LINES IN ALASKA
In the spring of 2015, Neil and Ian Provost embarked on another pursuit for big lines and wild fish. Once again, it was north to Alaska, just as it was 3 years ago on their first trip to capture steelhead and spines. Since then, the burning desire to explore around the next bend, to see what’s on the other side of the mountain, has grown to an inextinguishable level… Watch video