Brandywine Falls Provincial Park is 470 hectares of roadside forest punctuated by the 70-metre namesake waterfall. Most visitors never leave the forest trails or observation area, but Vancouver photographer Chris Collacott opted for a new perspective and this shot won the 2017 Whistler Film Festival’s “Adventure Film Series Photo Contest” held over the May Long Weekend. Access to the area Chris shot this from has since been closed to the public, so we caught up with Chris to discuss this once-in-a-lifetime shot. 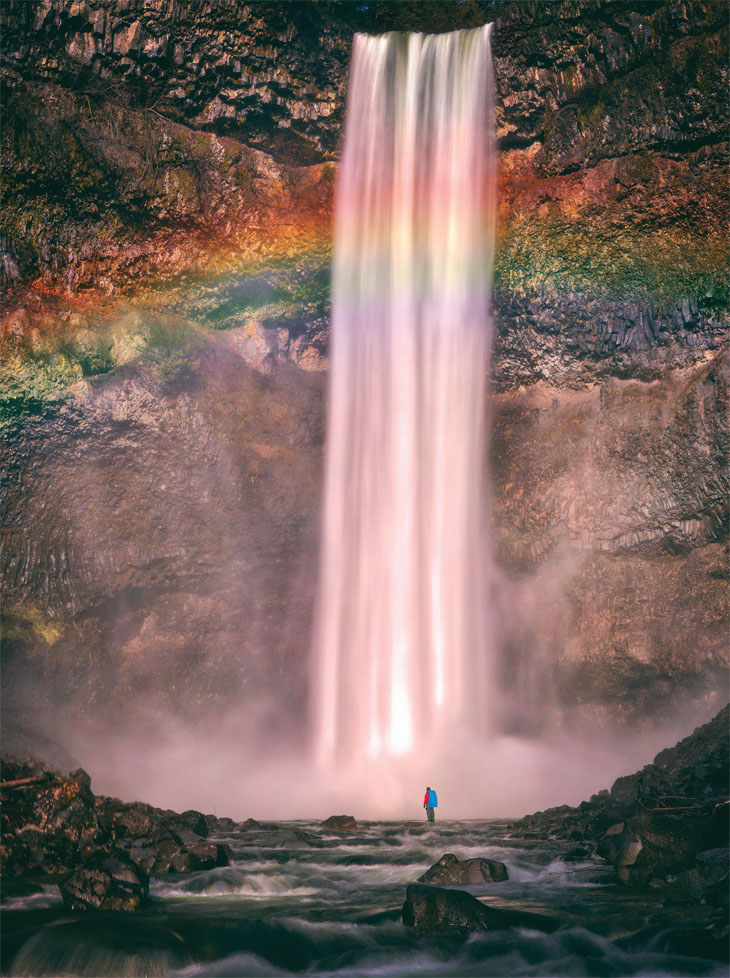 This is not a place you accidentally end up at. How much pre-conceptualization went into this shot?
I had actually come down to see the same falls the day prior to taking this and saw that there was a decent rainbow on the falls, but it would have been lined up perfectly an hour or so earlier. The weather was looking good the next day, so I returned to the same spot a couple of hours earlier and waited for the right moment.

Why do you think this area holds so much appeal for photographers?
Chris: Brandywine Falls, I suppose, could be said to have “naturally great composition.” It has a nice straight-down falls, symmetrically-centred by the cliffs. There’s a creek that runs straight from the bottom creating a great leading line foreground, and it [used to be] accessed quite easily. Compared to some of the other falls, Brandywine makes it easier to get a more impressive composition.

People may not realize that this image is a ‘selfie.’ How were you able to compose the shot and still successfully get yourself in the image?
I wanted to put myself standing in the shot to really show the scale and size. I used an intervalometer to take shots at intervals of ten seconds, so that gave me plenty of time to walk out and pose a few times, so I could pick the best one for the shot. I then merged that shot into the panoramic image.

Can you run us through the technical aspects; ISO, shutter speed, aperture, lens, zoom, etc.?
Chris: The original image consists of three rows of approximately seven images across for each row shot at 70 millimetres. ISO was 100 and aperture at F11. The reason to zoom-in instead of using a single shot with a wideangle lens is that now the overall resolution is so much more–and this can make a big difference when printing the image very large.

Note: This photo was taken before the area was closed off by BC Parks. There are now signs posted stating that anyone caught outside the fenced area could be hit with a $115 fine.