Hailed as one of the most influential climbers of all time, Fred Beckey is the original American “Dirtbag”—one who abandons societal norms and material comforts in pursuit of a nomadic mountaineering lifestyle.

This rebel athlete’s lifetime of accomplishments set the bar for the entire sport. He shattered records with an unparalleled string of superhuman first ascents, bushwhacking trails and pioneering direct routes thought previously impassable.

Beckey burned bridges, eschewed fame and thrived as a loner so that his only obligation would remain conquering the next summit. He kept meticulous personal journals where he mused on everything from arcane geology to his romantic life, to the myriad sunrises he witnessed from vantages not seen by anyone else on Earth. An environmentalist before there was such a term, Beckey’s legacy includes 13 essential books that act as blueprints for new generations. He is still defiantly climbing today at age 94. For more information on the film, visit dirtbagmovie.com. 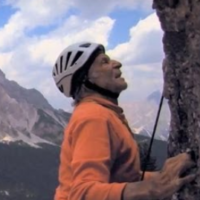 FRIDAY FLICK: A DAY WITH FRED BECKEY IN THE DOLOMITES
Prolific climber Fred Beckey has a legacy of first ascents greater than that of any other climber. At 89 he had never climbed in the Dolomites, so last year he headed out to do just that. “We live on an astounding planet, punctuated by mountains on every continent,” writes Beckey in his masterful book 100 Favorite North American Climbs. “The mere presence of mountain ranges has long drawn the human imagination as an invisible force. Some say mountains have a ‘psychic gravity’ enticing us into their grip…”… Watch video