If you want to learn something about local weather, ask a local diehard paddler, kiteboarder or surfer. To paddle or surf effectively on big lakes requires knowledge of the weather events that propagate waves and chop. There are plenty of apps out there offering wind reports, buoy readings, barometric models, and wave-height predictions. Yet even with all this information, knowing how to interpret it requires relatable on-water know-how and experience. 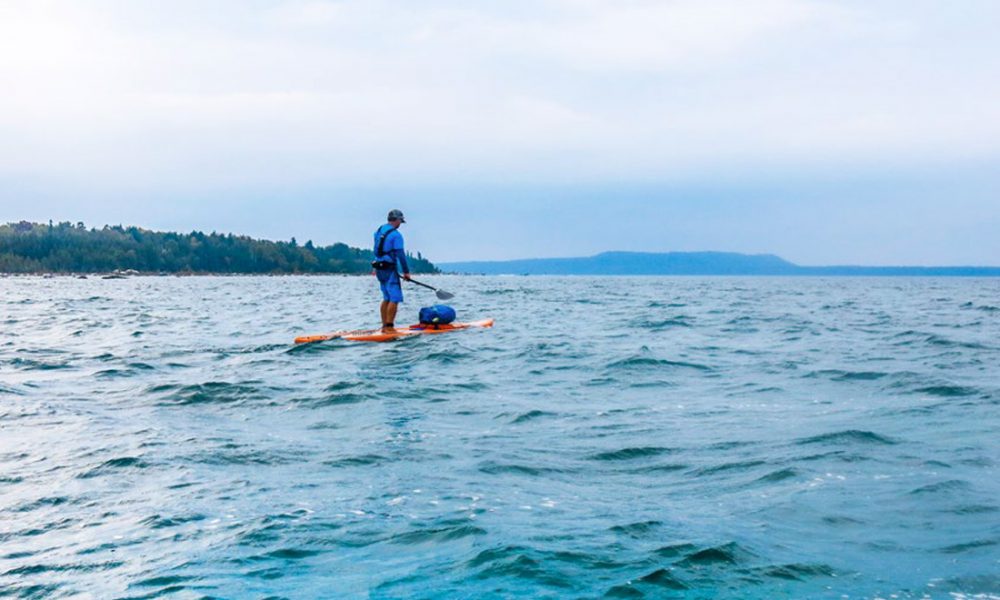 On a typical SUP, sea kayak or canoe trip you will probably end up paddling in multiple directions, and knowing how the wind will line up with your route is very useful knowledge. Preferably, you will want the wind blowing from behind you, pushing you along your intended course. But this is not always possible and on longer trips, paddling into stubborn broadsides or persistent headwinds is often unavoidable. Want an on-site visual reference for wind direction on open water? Look for Langmuir spirals.

If you’ve spent much time in boats, you’ve probably seen long lines of foam running parallel to each other on the water surface. These windrows (or slicks) are produced by Langmuir spirals—also known as Langmuir circulation—named after the American physicist Irving Langmuir who first observed the phenomenon in seaweed in the Sargasso Sea. The spirals form in various speeds and frequencies and express a complex series of effects at play, mostly the result of wind action on the water surface over a period of time.

When paddling if you point your compass north then add the direction of the windrows, you can observe the prevailing wind direction. But Langmuir spirals are interesting beyond their practical use as a wind compass; much more is going on than wind and water traveling in a series of parallel lines. The spirals also reveal the direction of currents and can help you use them to your advantage—making the difference of hours of effort on a coastal tour. Spirals tell us how the winds line up with the coast, and which direction we would drift if we were to stop paddling.

“The spirals also reveal the direction of currents and can help you use them to your advantage—making the difference of hours of effort on a coastal tour.”

Langmuir spirals consist of vortices of wave energy travelling between the windrows, produced by the prevailing wind dragging the surface of the water. A volume of water has to replace what has been pushed forward by the wind’s traction. Regular series of upwelling and downwelling zones take form between the vortices, producing the peaks and troughs of the windrows. The foam is stirred-up biofilm that generates from the spirals as they mix surface layers with deeper layers of water. The mixing of layers produces phytoplankton and bacteria concentrations in the surface water. This effect draws larger zooplankton up to feast opportunistically. In turn, larger feeders follow up on the food chain, such as minnows and cyprinids, and these follow suit by attracting predators like waterfowl.

All told, Langmuir spirals churn the whole lifeaquatic into motion. And you thought they were just bubbles in the water. Studies on this phenomenon are many, and we won’t dive any deeper here. But do remember them as an invaluable navigational aid. When you’re on the open water and want to know which way the wind blows and more, look to the Langmuir spirals to guide you home

TIPS FOR PLANNING AN OVERNIGHT SUP ADVENTURE
It sounds like a crazy idea: take a stand-up paddleboard on an overnight trip. But considering the crazy things people do with these boards (crossing Georgian Bay in the winter, yoga, fishing, etc.), it isn’t that out of line. And if you can muster up the gear, the time and the location, the second you hit the water you’ll know all the planning was worth it. Here are a few tips to get you overnight SUPing… Read more