In the spring of 1904, two bull and two cow moose from New Brunswick’s Miramachi region were released near the small community of Howley in western Newfoundland. It wasn’t the first such experiment on the 111,390 km2 island once considered a peripatetic sportsman’s paradise until its only native ungulate, woodland caribou, was hunted to near extinction in the late nineteenth century.

Unlike previous failed moose introductions, however, this one went swimmingly. By 1935 Alcesalces had occupied much of the island—aided in no small part by extirpation of wolves around 1930. Regulated hunting began, but moose populations continued to climb. As hunting pressure increased, offi cials instituted a lottery system focused on areas where moose needed thinning. With abundant food and negligible predation by the island’s lynx, coyote and bear, that was soon everywhere.

Today, invasive moose are whimsically deemed “hyperabundant” by provincial wildlife ecologists, and an estimated 150,000 descendants of those original four now represent 10 percent of moose in all of North America, stuffed into less than two percent of the species’ range. Aside from strategic culling in national parks, hunting has proved inadequate as a control measure. With an average 20,000 moose taken annually but over 40,000 calves born each year, it’s not hard to plot the upward trending growth curve. Regardless, the annual fall hunt is now a deeply entrenched cultural tradition celebrated in story and song, with moose featured everywhere from ski-area cafeterias and backyard barbeques to community festivals and restaurants promoting locally sourced foods.

Moose has made an indelible mark on Newfoundland’s identity, but it has also marked the landscape on which it is now the driving ecological force. With an average density of 1.7 moose/km2—some 3–20 times greater than other boreal ecosystems in which it’s native—the Newfie moose has exceeded its adopted environment’s carrying capacity. Intensive browsing by animals that can weigh 450 kg has reduced abundance and distribution of native species like balsam fir and mountain ash, severely inhibiting forest regeneration in both timber-harvested and insect-disturbed areas.

In parts of northern Ontario, 40 percent of adult moose are dying from brain worm, a tiny parasite transmitted by deer. An additional 20 percent are dying from higher than normal winter tick loads…

This alteration of forest ecosystems has affected habitat for everything from birds to lichen, even facilitating an influx of exotic plants for which moose coincidentally function as main vectors of seed dispersal. Though the imported icon packs a serious ecological punch, there’s an even bigger problem: moose-vehicle collisions, some 740 annually that include hundreds of injuries and a minimum two deaths. Estimated cost to the province of each accident is ~$31,000 CAD, or $23 million/year at current collision rates.

Ironically, the critical mass of invasive moose messing up Newfoundland may represent a last North American stronghold of this iconic animal. That’s because virtually elsewhere else on the continent, including Ontario, the species is in freefall.

By 2013, alarming declines were seen everywhere from Quebec westward. In Minnesota, the moose hunt was suspended indefinitely. Dramatic declines both there and in Michigan resulted in moose being deemed “a species of concern” with talk of listing it as endangered. Even in areas of relative abundance or natural increase, all signs now point to imminent collapse. As with most animals in decline, potential causes are numerous and inter-related, and include climate change and associated effects, industrial disturbance, habitat loss, excessive hunting pressure, disease, and pollution. These interact in complex ways that will vary from region to region. But if we zoom in on the most obvious three “natural” factors—disease, predators and climate—you needn’t look far into that troika to find an odd connection: propelled by climate and habitat changes, the continent’s deer are overpopulating and expanding everywhere, with the result of spreading disease to moose and increasing their depredation. 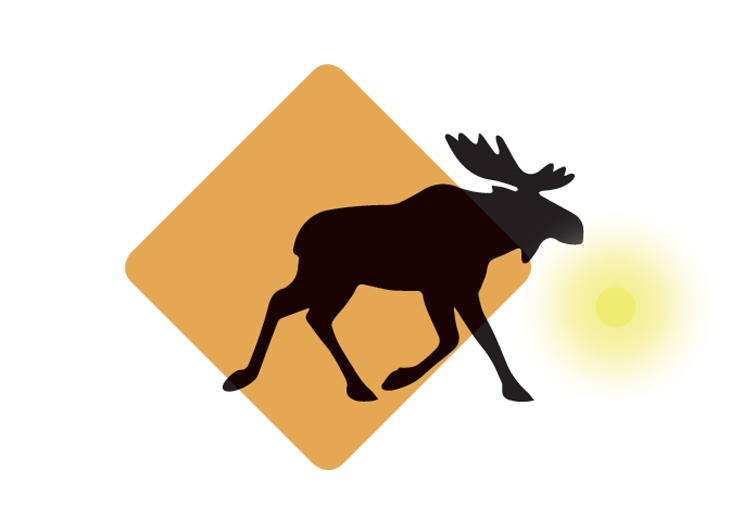 In Minnesota and parts of northern Ontario, for instance, 40 percent of adult moose are dying from brain worm (Parelaphostrongylus tenuis), a tiny parasite transmitted by deer. An additional 20 percent are dying from higher than normal winter tick loads, and a final 20 percent from a combination of stressors. In Alberta’s Jasper National Park, moose decline is attributed to deadly giant liver fl uke (Fascioloides magna), more wolves, and continued collisions on rail lines and highways traversing the park. Another emerging problem is decreasing calf survival. In Minnesota’s Grand Portage Trust Lands, 90 percent of moose calves die each year—75 percent lost to predation in the first weeks of life, 15 percent to health issues.

Though brain worm doesn’t affect deer (it lives benignly in the connective tissue around the brain and spinal cord), the parasite has a typically complex life cycle: worms release eggs that hatch in the deer’s lungs; coughed up, swallowed and excreted, the larvae find homes in snails and slugs. By accidentally consuming these mollusks while grazing, 90 percent of all deer are infected in their first two years of life. In areas of deer abundance, moose pick it up, too. But brain worm isn’t happy in moose, burrowing around in search of a deer brain it never finds. Not only are moose dead-end hosts, they’re also usually dead. (On Lake Superior’s Isle Royale—free of deer and thus brain worm—the trend is opposite: collapse of the local wolf population from inbreeding caused moose numbers to soar.

As on predator-free Newfoundland, the irruption threatens to exceed carrying capacity by wiping out its main food, balsam fir, demonstrating why predators are critical to holding prey populations in check and keeping forests healthy.) Ditto for winter ticks, another devastating pest moved around by cervids like deer and elk. Larval ticks climb onto moose in the fall and feed themselves into adulthood over winter. Moose with particularly heavy tick loads—over 100,000 counted on one decidedly miserable Ontario animal—can’t eat enough to replace the blood loss, and end up cannibalizing their own muscle tissue for protein before, inevitably, dying.

These proximal parasite issues, however, share the same underlying cause: climate change. Brain-worm carrying deer populations expand with shorter winters and longer growing seasons, and tick populations explode with earlier snowmelt. Historically, deep winter snow kept deer from moose country, with less opportunity for the species to mix. But warmer winters have allowed deer to move north into boreal forest in the East, and to higher elevations in the West, where their greater prevalence boosts populations of predators that are also more than happy to prey on moose calves.

One apex predator in particular is affecting calf survival. Ontario’s moose population has declined rapidly over the past decade, warned the province’s Environmental Commissioner Dianne Saxe in a November 2016 report that urged government to take better care of the province’s wildlife and forest resources just as hunting season for adult moose and calves got underway in northern Ontario.

Saxe also suggested hunting rules for calves are too lax, noting that “every single one of the 98,000 licensed moose hunters in Ontario is allowed to kill a calf every year—that’s more than three times as many hunters as there are calves even born.”

“Moose are key forest species in most of Ontario,” Saxe told the Toronto Star, recognizing the combined impacts of loss of roadless areas, fire suppression, disease and hunting. “[And] climate change is making it worse—moose are exquisitely adapted to cold weather and very poorly adapted for heat… there are now an estimated 92,300 moose [there]… a decline of about 20 per cent over the last decade.”

Hard-hit areas include Thunder Bay and Cochrane, where moose are down 50 and 60 percent, respectively. Saxe also suggested hunting rules for calves are too lax, noting that “every single one of the 98,000 licensed moose hunters in Ontario is allowed to kill a calf every year—that’s more than three times as many hunters as there are calves even born.”

Ontario responded to declines two years ago by launching a Moose Project looking at ways to reduce pressure on moose and restore populations (ontario.ca/page/moose-population-management). And while this has included changes to the hunting season, more clearly needs to be done.

Other recommendations from moose-management advisory committees? Hammer deer through any means possible. And yes, they used that word.

The problem with hammering deer, however, is that they’ve proven adept at hammering back. Much like humans, deer modify the habitat they occupy and eliminate biodiversity, though not to their own immediate detriment. And when habitat quality declines, they simply move to a new area—or swim to one.