For Leighan Falley, Alaska is more than home — it’s a calling. Leighan spent years as a ski guide and climber on the Alaskan range, focusing much of her energy on Denali. But after becoming a mother, she found herself unwilling to pursue guiding (and the dangers that come with it), instead taking to the skies as mountain pilot. Follow Leighan on the Alaskan adventures that enrich her life and legacy in Denali’s Raven. Read more here. 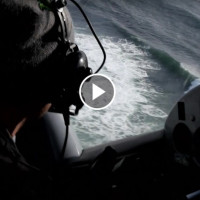 VIDEO: SURFING BY PROP PLANE IN THE NORTH WEST

Even in the cold remote corners of Canada’s West Coast, where there are waves, there will be surfers. How do you get to this slice of heaven? Professional skier and plane enthusiast, Rory Bushfield, has the keys and lands his 1950s prop plane on a remote beach to surf with friends… Watch the video