Below the waves of Georgian Bay lie innumerable shipwrecks whose culture we’ve mostly forgotten. But when you spend time with these artifacts you begin to realize the stories the Bay can tell you. And for me the question always surfaces: How do we safeguard the wrecks? 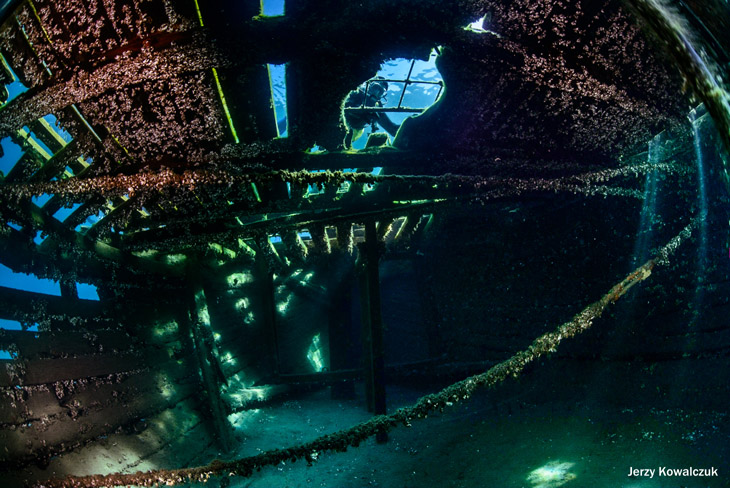 When underwater shooter Jerzy Kowalczuk drops his new photography, you pay attention. Mountain Life first worked with Kowalczuk last winter, and in round one we discussed his process, and how integrating sport and art can lead to photogenic sorcery.

Jerzy Kowalczuk dives throughout the year. He’s seen water levels change, temperatures drop, floe ice threaten the condition of shallow wrecks. And he’s seen the effects of increased tourism in Fathom Five National Marine Park. Does he think the wrecks are in danger? Not exactly. 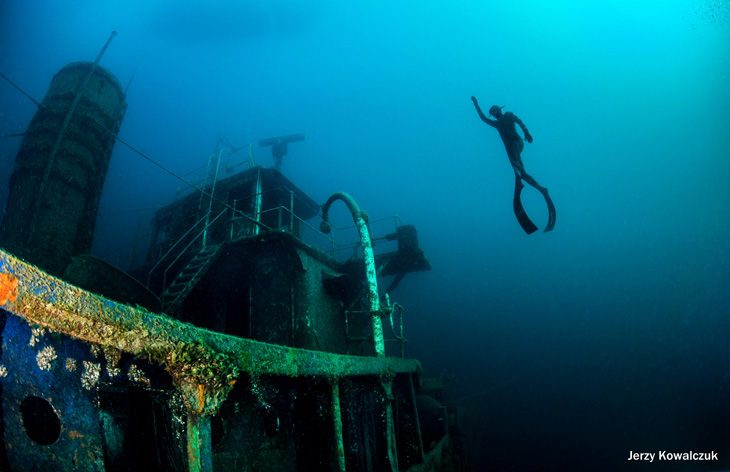 “The dive operators in Tobermory are very responsible people,” he says. “They’re always telling every diver on their boats that the shipwrecks have to be preserved for future generations… They’re not to remove any items, not to break anything… And as divers we’re watching the new divers; many times we’re acting like guides for newcomers to the water.”

Ice is a concern for Kowalczuk. He’s witnessed the effects of ice shifting wrecks in shallow waters like Big Tub Harbour. The recent years Georgian Bay has experienced huge freeze-overs; in 2015, forecasters with the Meteorological Service of Canada estimated that Georgian Bay ice coverage reached 97-98 percent, at a time when the average cover of the Great Lakes is usually around 34 percent. 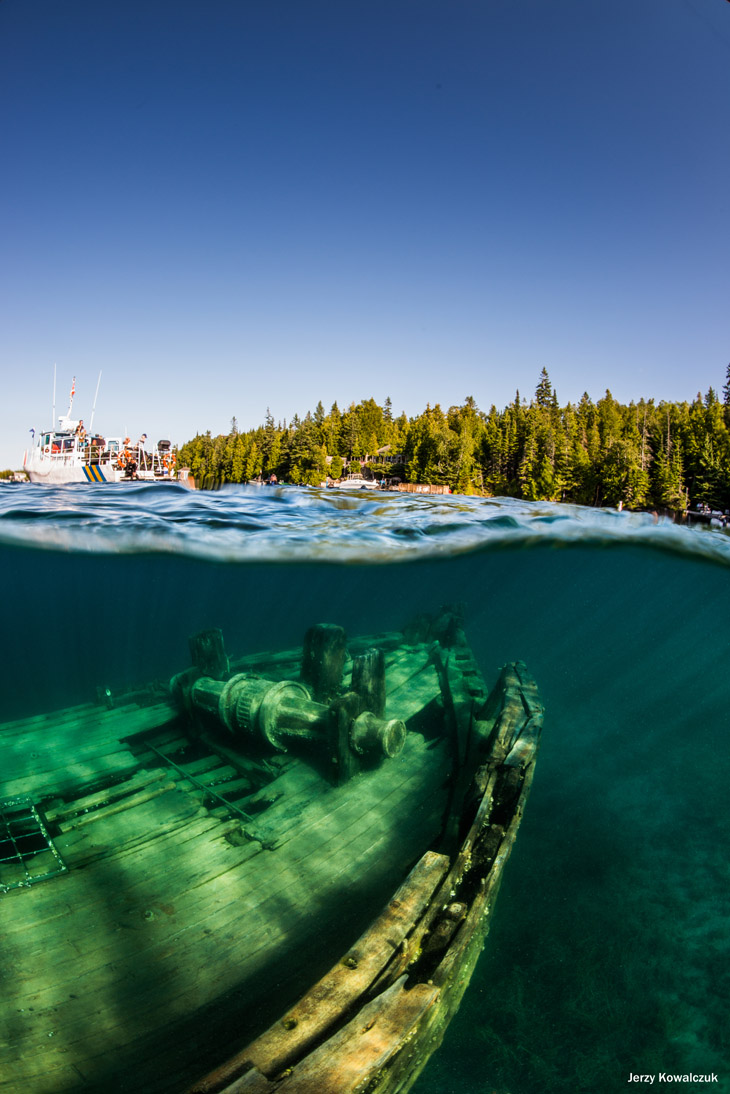 “A couple of years ago ice thickness was about four feet, so you can imagine these large pieces being pushed up against each other near shore, and pushed deeper and deeper,” Kowalczuk explains. “Eventually they start touching parts of the wreck.”

Luckily, freshwater is a great preserver of wrecks, and the perpetual chill of the deep Bay assists in the pristine condition of many Fathom Five wreck sites.

Splintered beams, rusted chains, and evidence of lives lost greet those who dip below the surface, but when the day is done and we take note of what we’ve seen, it is apparent that the shipwrecks of the Bruce need protecting, especially in our collective memory.

“Cold water will preserve wooden wrecks for a much longer period of time. In Tobermory we also don’t have many creatures building up or growing on the wood,” says Kowalczuk. So while the Great Lakes environment supports the natural preservation of the wrecks’ structure, should humans worry about intervening

In Haida First Nations culture, the ownership of memory and the right to tell a story is passed on—the ravages of time give dominion to the people. To take full ownership of these stories may mean eventually allowing them to die. 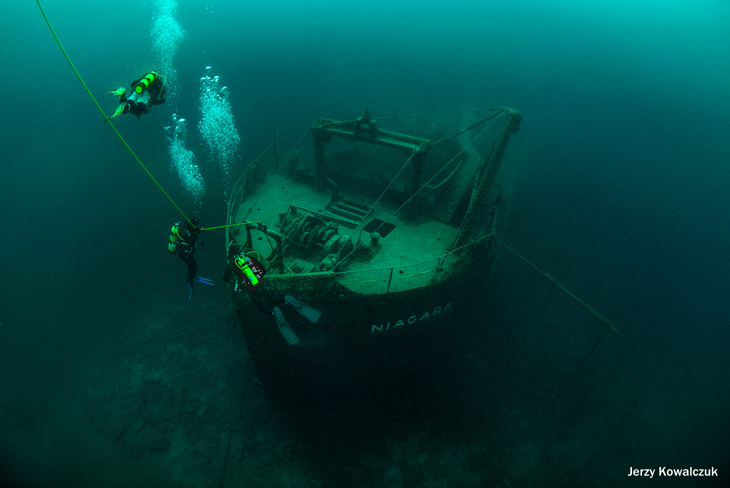 Totems are inconceivably complex histories that tell the story of family and connection to land. Totem preservation falls under the Haida’s interpretation of time passing. By leaving the poles to endure the elements and to watch them inevitably decay over time offers respect to the artists and societies of the past.

Rebuilding or repairing totems doesn’t acknowledge the past represented by the condition of the pole itself. To the Haida, denying this history creates inauthenticity. So if we choose to intervene with the Bay’s shipwrecks—shifting and displacing the stories from our past—are we offering our respect or alleviating our societal fears of cultural decay? Perhaps we could learn to protect the stories of the past, not just evidence of its existence.

Visits doubled to Bruce Peninsula National Park (adjacent to Fathom Five) between 2008 and 2016. 194,000 visits ballooned to about 400,000 last year, according to a presentation made by BPNP superintendent John Haselmayer, at a meeting last October about tourism policy and environmental preservation. In 2016 more people were turned away from BPNP’s famed Grotto than were let in—but the Bruce Peninsula Environment Group is hard at work proposing processes to accommodate tourism while protecting the natural playground.

BPEG President Megan Myles says the two most popular tourist destinations on the Bruce Peninsula are the shipwrecks and the Grotto. For a sustainable tourism plan, a code of conduct for tourists is good place to start, as well as collecting data for occupancy and visitor loads to help evaluate the need for beefed-up infrastructure.

“The Park does limit the number of shipwreck viewings per day,” says Myles. “So the growth model is limited.” But the role of shipwrecks in the local economy and to the area’s cultural heritage is profound. So perhaps the best way to combat inflated tourism is to make sacrificial lambs out of certain high-traffic locations in order to protect the majority of the shoreline. 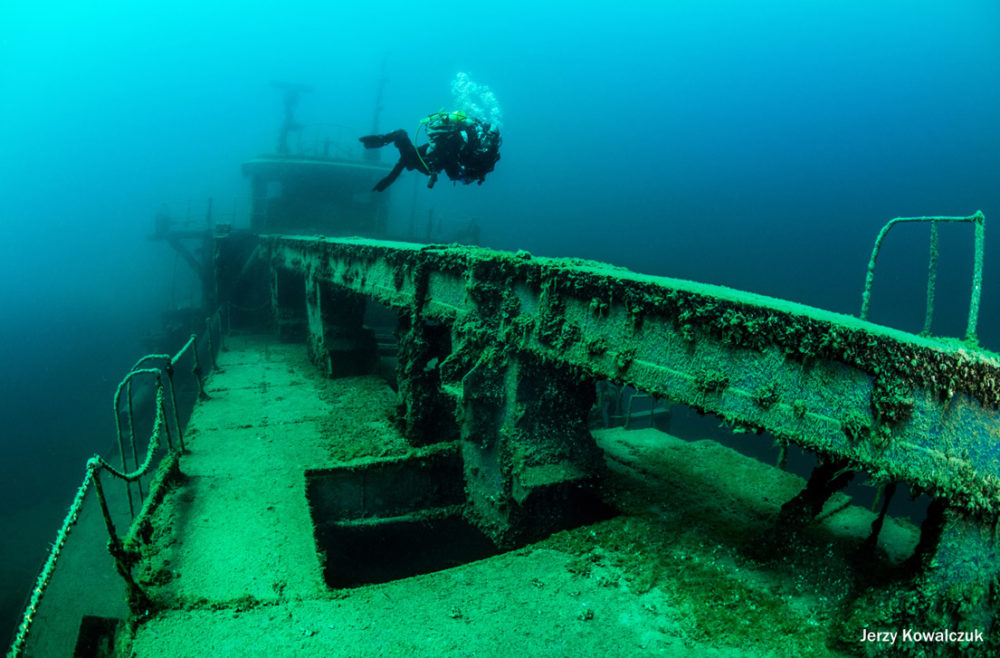 Splintered beams, rusted chains, and evidence of lives lost greet those who dip below the surface, but when the day is done and we take note of what we’ve seen, it is apparent that the shipwrecks of the Bruce need protecting, especially in our collective memory. But I’d argue the ships themselves aren’t so important.

The preservation we need to seek is learning how to tell the stories of these places. We share the history of our loved ones with tales of triumph, love or anguish—the memory of their lives becomes the important part, not so much their flesh and blood. The shipwrecks of Fathom Five are just beautiful bits of splintered wood and they should be permitted to pass. In order to safeguard the legacy of these wrecks, it’s their stories we need to keep close.