Desert Dawg doesn’t know how old he is and doesn’t care. And why should he? After all, the charismatic Australian blue heeler has the outdoor-media world by the tail.

After gaining notoriety with his Desert Dawg Adventure Blawg—chronicling adventures in Utah’s canyonlands with his faithful “man,” noted photographer Ace Kvale—DD has gone on to canine infamy as co-star of the heartwarming, Vasque-sponsored film Ace and the Desert Dog, which tracks the pair’s relationship through the portal of a 60-day hike undertaken to celebrate the 60th birthday of DD’s manpanion. 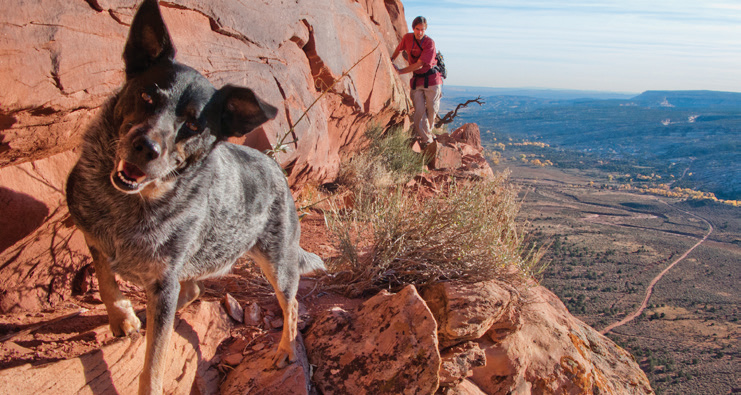 The blawg, which can count thousands of fans, began as a way for DD to pass along the wisdom he comes by naturally. “Heelers are known for bein’ so smart an’ stuff, I thought I could help other dawgs understand their poor, misguided humans. Help train ’em not to put dawg packs on us and useful stuff like that.” The film came about when director Brendan Leonard recognized the pair’s special bond and adventure partnership.

While the media accolades are laudable—along with other accomplishments from wolfing down pounds of bacon to howlin’ the blues to taming his man’s notoriously gruff photo buddy Marko Shapiro—celebrity hasn’t gone to Desert Dawg’s head. He still craves the simple canine pleasures: an evening walk, grass to run on, and fresh cowshit to roll in.

How did you get hooked up with this “man” guy, Ace?
It’s pretty blurry. Man was just, like, there and we became one unit. Me and my man. Although today when he was distracted talkin’ about the environment or something else silly, I wandered over to The Place and met these really nice people… I just settled in and looked up at this woman with my big brown eyes and next thing you know I was eatin’ burger! Forgot all about man till I heard him yellin’ my name. That happens a lot. Speaking of new people, you don’t smell familiar—have we met? This answering questions stuff is tiring. Think I’ll take a nap.

What actually happens out there when you two go walkabout—do you keep man out of trouble or vice versa?
We are a team. Man leads, but I lead from behind man. So when he’s trying to figure the shit out he can talk to me and then he feels better. That’s my main job. Just being even, level-headed, solid. Sometimes man has to lower me down a canyon or lift me up a cliff a little ways. I don’t like it much but I play it cool. I don’t fidget or make it any harder than it has to be. It’s always tense but I just do my job ’cause I’m a pack animal and I’ll do what’s necessary to stay with the pack.

What’s it like being a film star? Would you make another film? Any aspirations to get on the other side of the camera and direct?
Let’s put it this way: I got a box of dawg treats delivered by UPS today from one of my sponsors. And they are really, really good. My favourite. So I like being a star. A lot. Otherwise not much has changed. Sleep, eat, hike, shit. Repeat. Oh, and meet girls. Yep, still a chick magnet even though man says I have dragon breath. Sure I’ll make some more films. Just reviewing scripts now, actually, but they’re top secret. Directing is a good idea. Heeling cows and film directing go paw-in-paw