As often the case, Max and Elena Zureski’s quest to find a good quality bike for their child shifted into a passion project that eventually launched a business.

Geared towards enthusiastic parents looking for better mountain bikes for their kids, Spawn Cycles hit the trails in 2011 in Calgary. With a two-year-old son transitioning from a balance bike, the Zureskis, like many of their parent peers, weren’t able to find a bike that was lighter than their youngster. 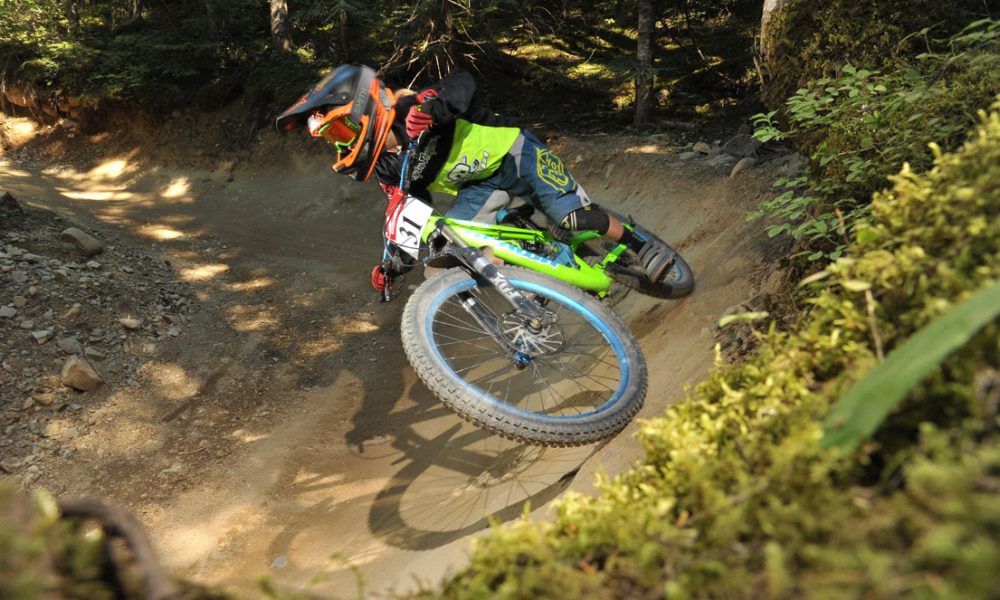 “I hadn’t looked a kid’s bike in 20 years, and I was shocked that nothing had gotten any better with them,” Max says. “At the time my son weighed like 25-30 pounds and it seemed like all the bikes weighed more than him. Imagine you don’t know how to pedal a bike—and say for me, I’m almost a 200-pound guy—it would be like trying to learn to pedal on a dirtbike.”

“We make high end kid’s bikes that make sense—lightweight with good components,” he continues. “We want to make riding fun for the kids instead of being a chore with some of the heavy junky bikes out there.”

“At the time my son weighed like 25-30 pounds and it seemed like all the bikes weighed more than him. Imagine you don’t know how to pedal a bike—and say for me, I’m almost a 200-pound guy—it would be like trying to learn to pedal on a dirtbike.”

While there are some options for lightweight children’s bikes out there, most aren’t available in North America, and fewer still cater to the offroad market, leaving parents to cobble together components to make a department store marginally better.

In 2013, Spawn Cycles moved its operation to the lower mainland, and after a weekend of filming on the trails of the Sea-to-Sky, the couple moved the company again, joining the growing mountain bike industry in Squamish. 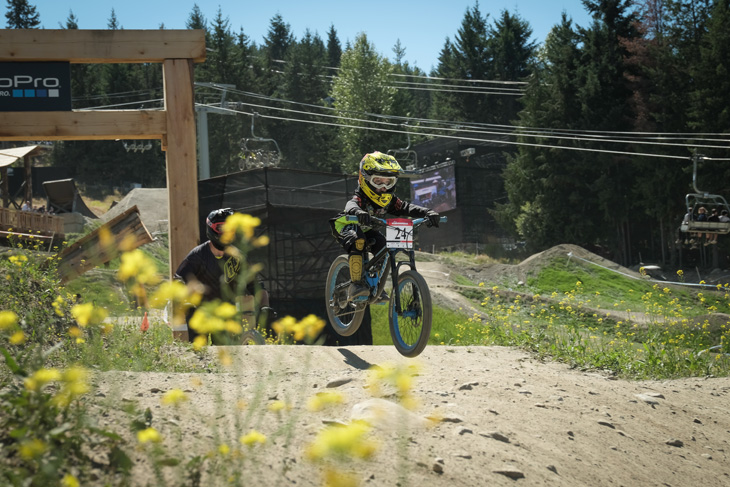 Max says that about 90 percent of Spawn’s business is online, and while in the beginning most sales were domestic, the majority of sales are now south of the border. Spawn expects to branch out into the EU, Australia and New Zealand markets in the coming year.

An avid BMXer growing up in the ’80s and early ’90s, Max is now a recreational mountain biker, giving him first-hand knowledge of his typical customer.

“Ninety-nine percent of our customers are enthusiasts who want something better for their kids,” he says. “When you have kids, the activities you like doing can either slow down or completely stop. A lot of the parents don’t want to lose the lifestyle and want to introduce their kids to the outdoors and being out on the trails.”

The bikes are designed in house, with Max conceptualizing the majority of the parts, an idea he developed during his BMX days.

“My dad’s a mechanic and does a bunch of machining, so he helped me build parts when I was a young BMXer,” he says. “We’ve always had this do-it-yourself take on things, so it didn’t seem like a big thing to step out and do something like this on our own.” 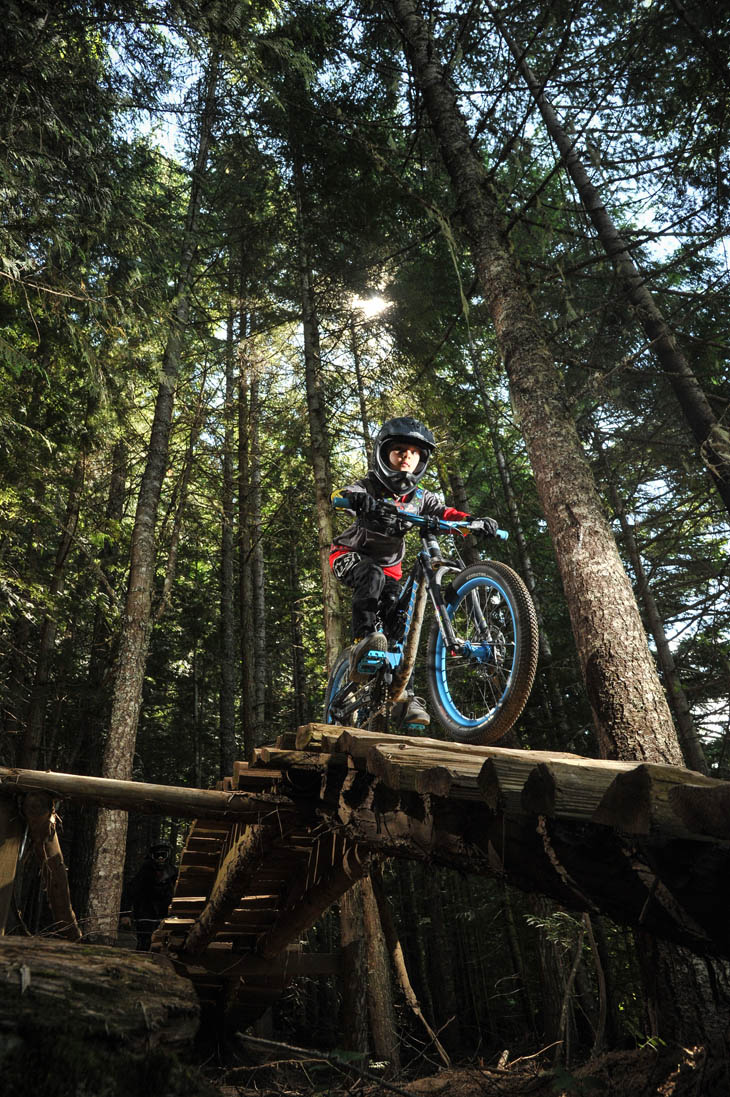 As with all things lighter and of higher quality, it begs the question: what about price?

Spawn Cycles offers a line of about nine complete bikes, as well as frames and individual components. Bikes start at about $350 for a 16-inch hardtail that weighs about 15 pounds. In the mid-price range, a 20-inch front suspension mountain bike that weighs only 22 pounds will cost about $600, and on the high end, a 24-inch loaded, full-suspension bike comes in at just under 2k.

“There are a lot of people who are happy to buy a department store bike for $100, but for our customers, they are usually pretty clear with what they want out of a bike so cost isn’t an issue,” he says.

He adds that the bikes have a strong resale value, fetching between 80-to-90 percent of the new price after a couple years. And while components are important, he’s quick to point out that the low overall weight is the real draw.

“This might be the first time a child realizes that body position makes any sort of difference at all…With a light bike, kids learn the fundamentals to build the foundation earlier.”

“This might be the first time a child realizes that body position makes any sort of difference at all,” he says. “On a heavy bike, they can move their position around all they want, but they’re never going to get the front wheel up, or get the bike to respond properly. With a light bike, kids learn the fundamentals to build the foundation earlier.”

So while high-end children’s bikes night not be in the cards for every parent, Max says the response from his customers so far has been on track with his mission.

“When you see a parent crying when their kid jumps on a bike and rides away without training wheels—it can be a super emotional things for parents. It can be pretty cool.”

For more information, check out https://spawncycles.com/ 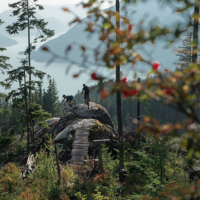 MOUNTAIN BIKING IN SQUAMISH
For decades, most Coast Mountain-ers knew Squamish as little more than a roadside refueling station with a hick reputation and an ever-present odour of pulpy, wet farts. Set almost exactly halfway between Vancouver’s legendary North Shore and the much-hyped riding in Whistler, old-time Squamish locals endured decades of ridicule and general excommunication by the “snobs” living to the north and south… Read more 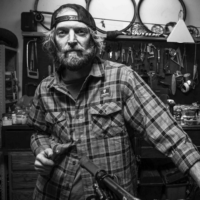 MOUNTAIN LIFER: FRASER NEWTON—MORE THAN JUST A BIKE MECHANIC
Good bike mechanics are born, not built. Sure, there are courses a person can take and certifications to achieve, but at the end of the day, it comes down to a state of mind: you’re either a tinkerer or you’re not. “I started building stuff when I was 7 or so, I guess,” says Fraser Newton, Squamish resident and chief mechanic for the BC Bike Race… Read more