A world traveller from the former Czechoslovakia now living in Vancouver, British Columbia, Jussi Grznar seems at home no matter where he finds himself—or points his lens. One writer called him “a master of arresting stillness in moments that are hectic by design,” while another labelled him “a storyteller at heart, always searching for the defining moment.”

With several exhibitions and numerous Red Bull Illume awards to his credit, the career Grznar started as a snowboarder in Whistler reached new heights when he was invited to the prestigious 2016 Olympus Pro Photographer Showdown held in Whistler during the annual World Ski & Snowboard Festival. As it turned out, Grznar had been prepping for the opportunity, having attended the Pro Photo 10 years in a row.

“My first time was during my first year in Whistler,” he says. “I was already interested in photography so I brought my little point-and-shoot and recorded the show from the back row.” But being ready in theory doesn’t mean you’re prepared. “When I got into this year’s Pro Photo, I cleared my schedule, didn’t take any work, and pretty much just shot ‘personal’ stuff I thought would fit,” he recalls. “I wanted a diverse show that took the viewer on a visual journey with me. I felt I had enough snow stuff , so I focused on surf, skate, base jump, landscape, and portrait photos.”

What he gathered was gold. Despite the difficulty of paring it down to an eight-minute slideshow, Grznar won hands down, taking both Best in Show and People’s Choice awards with a stunning visual display and spine-tingling soundtrack. 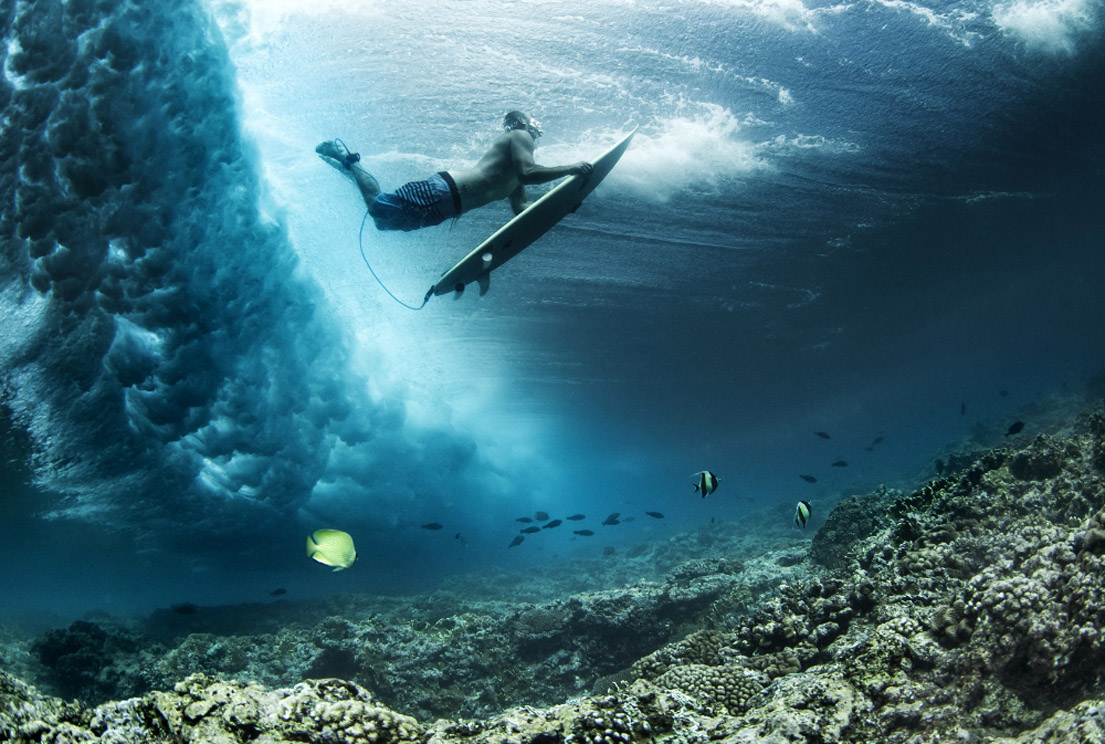 ONE SHOT: JUSSI GRZNAR
“The idea for this shot goes back to a day in Slovakia. I was driving to Bratislava with a buddy and noticed a Roxy billboard on the side of the road—a beautiful girl duck-diving somewhere in the South Pacific. I pulled over, stared for a few minutes, then told him I’d take a photo like that one day. “Yeah right!” he laughed. Meaning fat chance while we were living in a post-communist, land-locked country. Flash-forward many years and when a chance came to go to Tahiti, I knew exactly what photo I was going to get! Sticks—the subject—might not be a sexy female pro surfer, but he’ll do.” —Jussi Grznar