Born in Blenheim, New Zealand, free skier Pete Oswald grew up on a high country sheep farm in the central province of Marlborough. At the local ski hill, Rainbow Valley, he became hooked on skiing at 5 years old.

In his last year of high school he made the move south to Wanaka on the rumour that students were able to ski three days a week. Since then, Pete has been traveling the world in search of powder, speed and air.

We recently sat down with Pete for Last Col.

Last time you rode in a taxi with a stranger?
Morocco, 1 year ago. Sophie, my girlfriend, and I got into a small five-seater “taxi” with five other strangers to get back to the coast after climbing Toubkal.

Last time you slept in a van?
Italy, two years ago. Hunting powder in Europe, we ended up in Prato Nevoso where we sledded pow for two days then on the third day we smashed more pow in the morning then swam in the Mediterranean in the afternoon.

Last great piece of advice you received?
From Mum. Add a little sugar to your tomato based pasta sauce—it makes the tomato flavour just dazzling!

Last time you laughed so hard you cried?
Lake Unknown, NZ, two months ago, playing shadow hand puppets on the wall of a tent that we were also trying stop from ripping to bits and blowing away in a massive storm that we were caught out in.

Last piece of lost skiing gear you wish you still had?
Icebreaker Sheep Suit one-piece base layer. So epic for skiing, it was my second skin in winter. It has a bum flap zip so I never have to take it off, not even for number twos.

“I feel like a shorn sheep every time I get nude.”

Last time you needed stitches?
Austria, one year ago, when my drone malfunctioned and I tried to catch it and stop it from flying of a cliff. Saved the drone, but lost the tip of one finger and shredded three others.

Last time you sheered a sheep?
Never sheered one, but saved one…on skis. I also reap the benefits of those generous shorn sheep everyday in my Icebreaker kit. I feel like a shorn sheep every time I get nude.

Last time you did a shot-ski?
Last time I did a shot-ski, I made it on Jerry of the Day…for a second time. Treble Cone Alpine Resort, NZ Closing day. Always epic.

Last time you were really scared in the mountains?
Last Month in Duffy Lake National Park, Canada. In pitch black, in the middle of the night, we had a little incident with a small avalanche and partial burial, while hearing massive natural slides going off around us.

Last picture you framed?
Christmas. A piece of art that my girlfriend Sophie did for my brother and his wife.

Last thing you built with your own hands?
Christmas. I built the frame. Ah sorry, I also built Sophie a desktop easel to do her art. It’s real boss; it’s adjustable and folds up and everything.

Last gift you gave?
Probably that easel, unless you count all the crap we give people for crashing at their pads.

Last time you did something outside your comfort zone?
Yesterday, in Austria, flat 3’ed a cliff. I try to leave the comfort zone every day. Today I’ve done bugger all but answer these questions, though.

“I flew here to Austria with way too much shit and had to wear four jackets, pack the pockets with binding parts and wear my ski boots on the plane to avoid excess luggage charges. Something tells me it was not the last time.”

Last time someone inspired you?
Eddie the Eagle. I watched the movie, then met him at Kicking Horse. Another Boss.

Last time you hit the dance floor?
New years till there was no one left. Last two standing: Soph and I. Then got nude and jumped in the pond.

Last time you said, “This is the last time…”
When I flew here to Austria with way too much shit and had to wear four jackets, pack the pockets with binding parts and wear my ski boots on the plane to avoid excess luggage charges. Something tells me it was not the last time.

BEHIND THE BRAND: ICEBREAKER’S JEREMY MOON 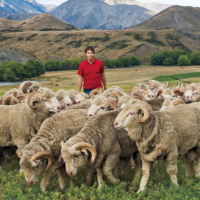 Twenty years ago, Jeremy Moon launched Icebreaker from his native New Zealand. With next to no experience in the apparel game, his goal was to make low-impact, high-performance apparel from renewable, natural sources. Icebreaker has since evolved to supply over 5,000 stores in 44 countries. Now the brand’s Creative Director, Moon talks about balancing his boardroom duties with his love for hiking, traveling and skiing…. Read more