Creativity breeds uncertainty. And uncertainty is what fuels the fire in our bellies and drives exploration, innovation and adventure.

In the spring of 2016, that creative fire and desire to discover “What if?” led us to the Boundary Range, the largest and most northern subrange of the Coast Mountains, to answer a simple question: What happens when you mix whitewater kayakers and ski mountaineers? 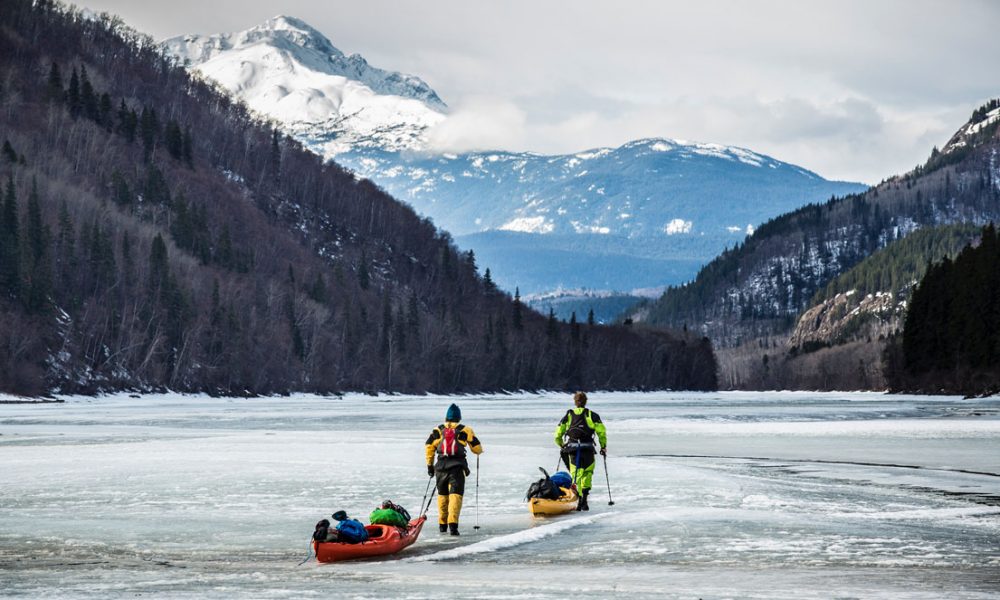 Our plan in a nutshell: kayak down the legendary Stikine River into the Boundary Range, climb to 7,000 feet (2,134 metres), ski epic lines and kayak out to Wrangell, Alaska to catch a ferry back. Job done. When the idea was first put forth, it sounded like a no-brainer. We asked ourselves: “Why has no one done this before? It seems so simple and logistically, it’s a dream…” Then we started to do more research. 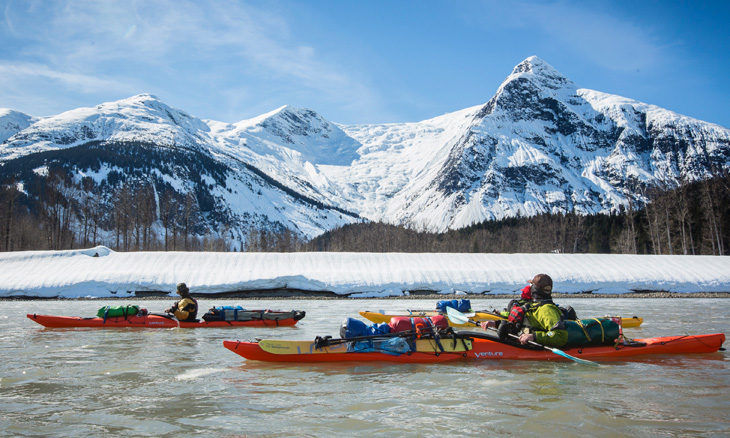 The Boundary Range stretches from the southern Yukon, down the lowest reaches of Alaska and into the upper reaches of BC’s North Coast. The Stikine freezes solid every winter and, depending on the year, can stay frozen into May or even June. But the team was strong and eager to go find out for ourselves.

Our plan in a nutshell: kayak down the legendary Stikine River into the Boundary Range, climb to 7,000 feet (2,134 metres), ski epic lines and kayak out to Wrangell, Alaska to catch a ferry back. Job done.

Brian Fletcher is best described as an ‘underground savage,’ with Sherpalike stamina and an expedition resume longer than anyone I know. Eric Parker and Erik Johnson are absolute soul riders who share an aptitude for adventure and a desire to get after it at any opportunity. Known for my good attitude in the face of even the most ambitious objectives, I felt we had a dream team, the perfect crew for the trip that would venture deep into uncertainty, and one of the most pristine zones in the province. 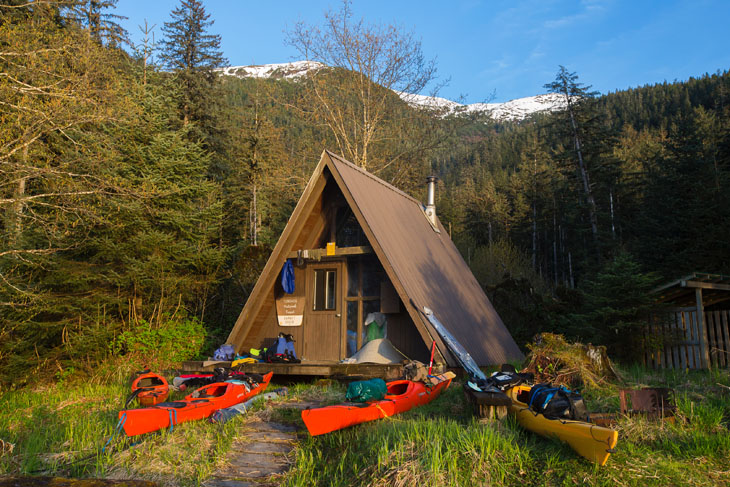 From the start, we knew everything hinged on the river, or more specifically the ice. The winter in Northern BC had been unseasonably warm, which gave us hope, but by no means a free pass. After contacting numerous heli operators in the area, we lucked out—a local Dease Lake pilot had flown the canyon from Telegraph Creek to Mud Glacier (a large chunk of river section we planned to paddle) and informed us that it was ice-free. For confirmation, we called the Telegraph Creek native band office. Bad news—they told us the river was still fully iced over.

Time for a team talk. The consensus? “Surely a heli pilot’s observations must be more accurate than that of someone working in an office.” Was it testosterone-fuelled, blind optimism? Only time would tell. We packed our gear and rallied north.

Despite iced-over conditions upstream, a free-flowing river greeted us at our put-in, the confluence of Taltan Creek and the Stikine River. It’s a significant spot for whitewater kayakers as it marks the end of the infamous Grand Canyon of the Stikine (the Everest of whitewater). We sat and reminisced on our own descents of it in warmer times, remembering the feelings of vulnerability and insignificance the river and towering canyon walls evoked. 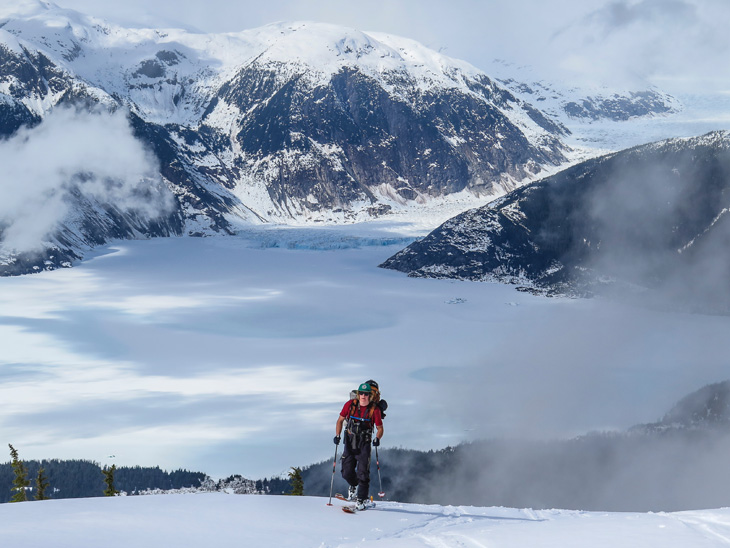 It seemed a fitting location for the start of a new adventure. The following morning, exploding mountains of gear and food littered the beach. Sea kayaks are large, but cramming all necessities for a 16-day mission into one is a challenge. Armed with 16-foot Jura HV boats from Venture Kayaks and a bold optimism to make it work, even if it meant having equipment hanging off from all angles (which it did), we launched with skis neatly contouring the kayak curves and ice axes stashed within easy access in case of deadly ice bridges. We were floating!

When we came across our first ice jam—a novelty as none of us had any experience hauling 350-pound sea kayaks over crevassed blocks of ice— we were pleasantly surprised because it was relatively “tolerable.” As the day progressed, the random ice jams became river-wide, solid ice bridges. 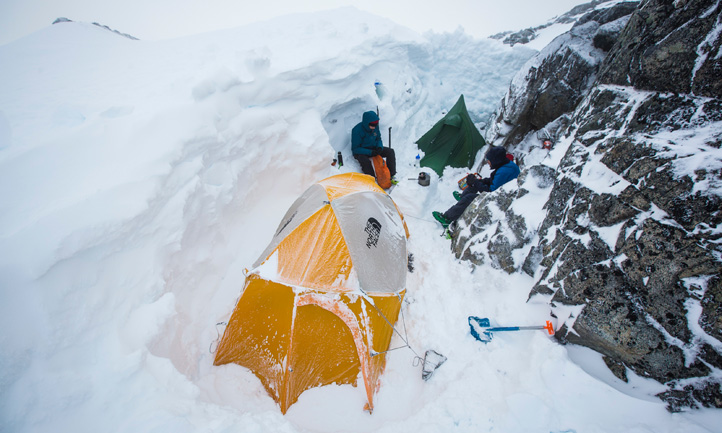 Over the next two days, the situation got steadily worse. Portages became a common occurrence, and on numerous occasions, the river was ice as far as the eye could see. We hiked past the small town of Telegraph Creek, pulling our kayaks behind us. Anyone who happened to peer out of their window must have thought us fools. Doubt plagued us, but we’d crossed too many short, walled-in, fast flowing sections to paddle/hike back the way we’d come.

Armageddon was going off all around us. The sound of cornices breaking and faces sliding echoed throughout the mountains. We bunkered down in a safe zone, terrified to move. A Size 2 slide roared past us some five metres to our right.

We concluded that the heli pilot we had spoken with was quite possibly “full of shit,” but hoped that once we hit the mountains, a warmer, stormier low pressure system must dominate—meaning we’d escape the clear skies and cold, katabatic winds to hopefully find less ice. Combining our unbreakable optimism (stupidity?) with simple math, we concluded that if we could cover 16 kilometres (ten miles) a day, even hiking the whole way, we could still get out before running out of food.

This was a far cry form the original plan of floating/paddling fifty-plus miles in the first day before spending most of the trip skiing in the alpine, but we were fired up to continue and accepted the potentially savage slog ahead. Moments like these highlight the necessity of choosing awesome teammates for big missions. Onward and (hopefully) upward!

As the mountains rose around us, things began to change. Each tributary that flowed in had a profound impact on the ice. The warmer coastal water created melt channels along the riverbanks for hundreds of feet downstream. Deep snowbanks lined the river, but the ice appeared to be behind us and ahead: a new hope and the realization that we might actually get to ski.

Mount Dang is aptly named, as those were the first words out of Brian’s mouth when he first laid eyes on its epic spines and powerful demeanour. After hanging food bags and lashing the kayaks vertically to a tree to reduce the likelihood of sabotage by a recently awakened grizzly bear, we clicked into our skis and set off. 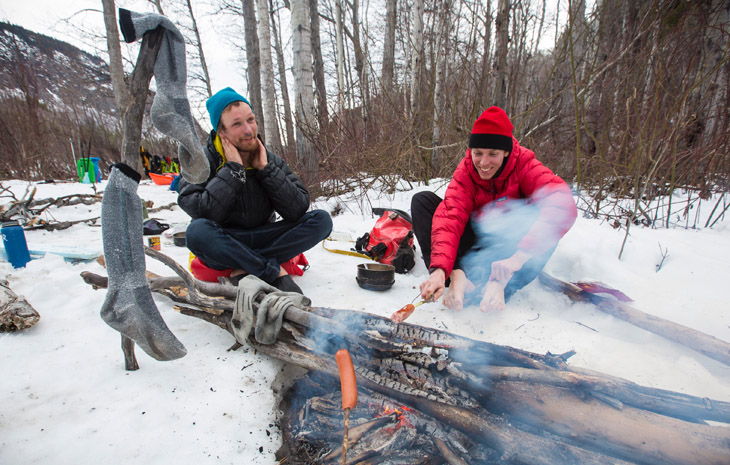 By 5:00 p.m. we made high camp at 5,500 feet (1,676 metres), crushed, sunburnt, exhausted and overjoyed. We watched the sun set over Boundary Range and the energy of the area immediately created a state of absolute bliss that calmed even the most active minds.

In the morning, enjoying continued high pressure, we climbed an icy, north-facing couloir to gain a summit ridge. Turned away from skiing the ascent route due to unappealing, inch-thick ice, we were able to time some good spring skiing corn cycles on nice open faces. Traversing back to camp, we noticed a change in weather on the horizon.

That night, a ferocious storm hit with gusting winds and snowfall. The only highlight the next morning was that Parker had left his boot shells outside his tent like a total amateur. As he dug them out in self-pity, we received a satellite message, weather forecast—the storm was to stick around for four more days. With rumours of natural hot springs downstream, we made the call to descend. 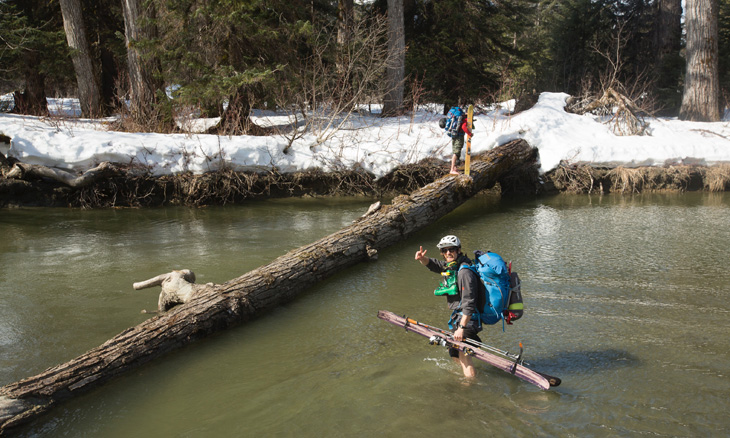 After our first attempt to find the infamous Stikine hot springs ended in a beaver-dammed cesspool of mosquitoes and sulphur, we caught a glimpse of a second, steaming creek 300 metres beyond the first. Trudging up another gnarly, sulphurous bog we discovered an oasis. Eight volcanic springs oozed out of the earth creating a verdant microclimate of lush plants and green mossy carpet in amongst a wintery backdrop. Our prayers had been answered and we quickly set to work building the first bathing pools in this untouched environment. Stiff bodies recovered quickly as we waited out the storm in the most relaxed manner any of us have ever experienced on an expedition.

We made high camp at 5,500 feet, crushed, sunburnt, exhausted and overjoyed.

When the skies cleared again, we headed out fast and light, ditching the tents and every other non-essential item. Powering through 600 metres (2,000 feet) of steep, sustained and exposed pitches, mixed dirt, roots, rotten isolated patches of ice and devil’s club proved a true test of our grit.

After gaining the ridgeline, we ascended the col and camped in lessthan- ideal snow conditions—we’d been hoping for blower pow, but the storm delivered concrete. It didn’t matter, we were up high in a spectacular setting for a second time. It was time to delve deeper into the mountains. 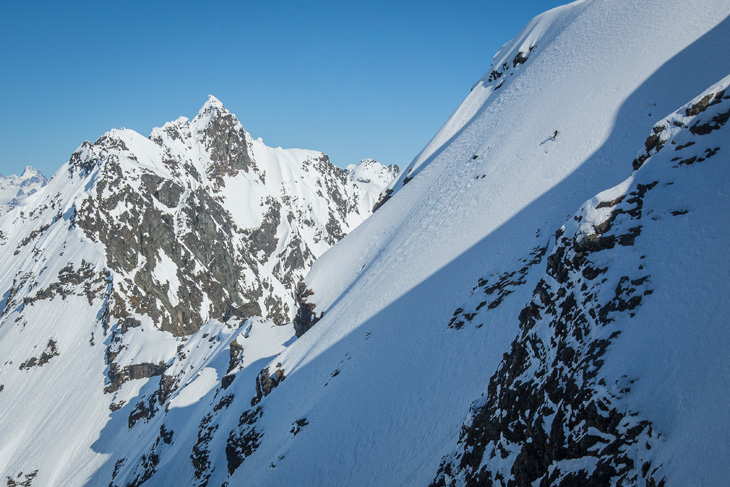 The next morning marked 36 hours since we’d left basecamp. The recent snow had had time to settle, and although heavy, it had bonded well and appeared stable. Then something quite unusual happened. A dense cloud sitting in the valley bottom rose to our elevation, its moisture itching for any surface to cling to. The snow acted like a giant sponge and temperatures soared. It reached its critical mass; Armageddon was going off all around us.

The sound of cornices breaking and faces sliding echoed throughout the mountains. We bunkered down in a safe zone, terrified to move. A Size 2 slide roared past us some five metres to our right. The decision to retreat came swiftly and easily, the safe and steaming hot springs were calling. And after that, home.

Paddling the final leg of our journey through driving rain and heavy winds, we arrived at the height of luxury—the Garnet Creek Forest Service cabin. A few, short miles from the ferry terminal at Wrangell, the cabin signalled the end of our journey, so we gorged on the remaining food and started the celebrations amidst a breathtaking display of wildlife—eagles, seals and a giant sea lion that appeared to check out the kayaks. 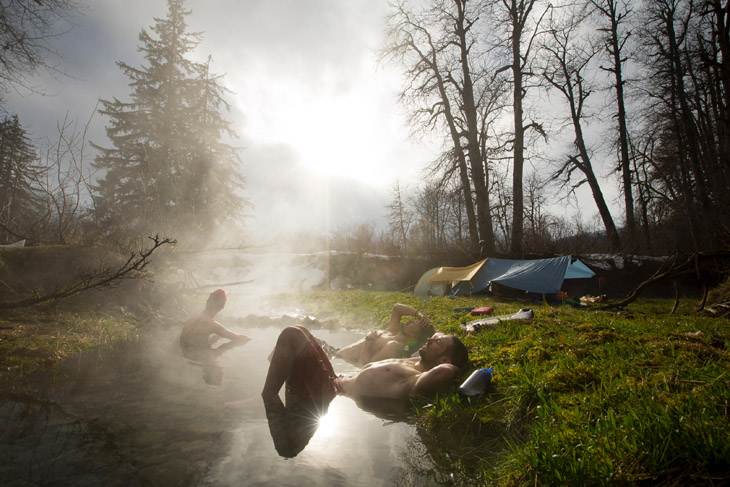 The Stikine River and Boundary Range had provided us with an experience that will be cherished forever. The energy and power of the vast and hanging landscape is utterly humbling and reminds us of how very insignificant we are in this world. It demands the utmost of respect and should be greatly appreciated.

The dynamics of our team was just as inspiring. In unpredictable, harsh environments, attitude is the one thing you can control. A unique expedition like this one, riddled with such high levels of uncertainty, requires optimism, witty humour, motivation and grit. As always, the team makes the trip.