It’s always a bit surreal when the heli flies off and leaves you alone on top of a mountain surrounded by thousands of acres of untracked wilderness. It’s a real trip though, when you’re sharing it all with GLEN PLAKE!!!

As we click in, my childhood hero gives me a nudge with his elbow and says, “Man looks to the stars. Since his beginnings, he has reshaped and redefined his environment, and what is…is no longer enough. He probes what might be. Man reaches for the stars. And as man explores the edge of the impossible, he crosses a threshold… to the outer limits.” 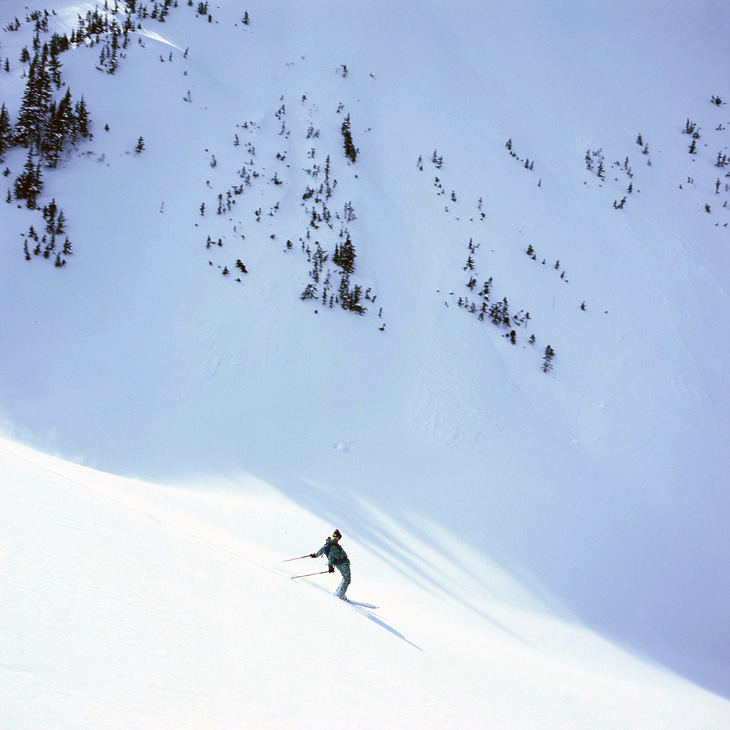 WTF? The roof of my mind flies off. What does this mean? Is Glen Plake trying to show me some deeper meaning to the mountains that I’ve missed over the past 30 years? What is my purpose here?

He can’t hold it anymore. Plake breaks the silence with the distinctive, contagious laugh I’ve already gotten used to from the ride in. Then a diamond in his tooth (I’m not even kidding) catches the sun and blinds me. What a dick! What a beauty.

We rip fresh pow all the way to the bird, then go do it again. Who is Glen Plake? If you have to ask, you’ve obviously never skied or even snowboarded… or perhaps you grew up Amish? Plake’s legendary status spans decades and generations. 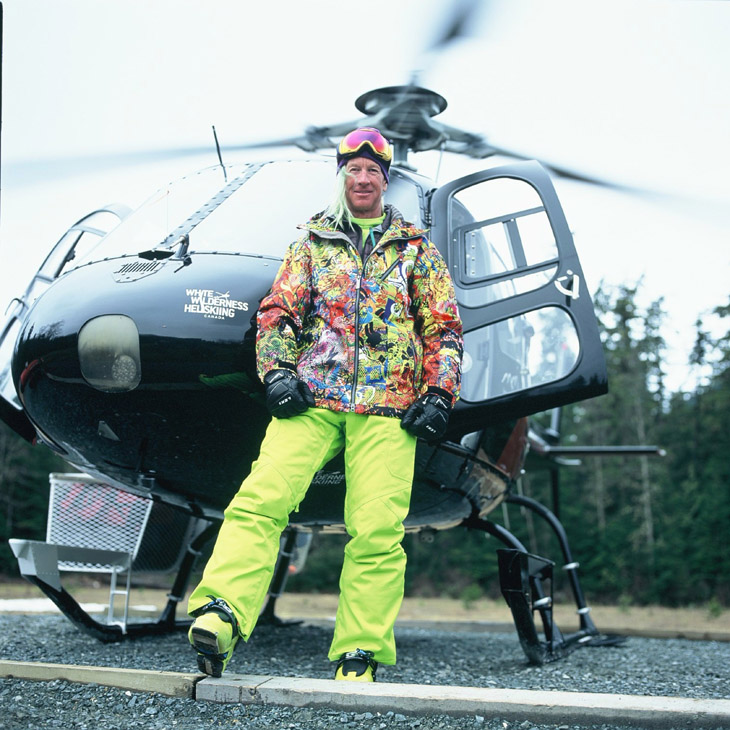 Now 52 years young, Glen Plake is a member of the U.S. Ski and Snowboard Hall of Fame and has skied in numerous ski films including 1988’s standard-setter The Blizzard of Aahhhs. He is also a Level 3 ski instructor, an accomplished mountaineer working towards his UIAGM (Union Internationale des Associations de Guides de Montagnes) mountain guide accreditation, is fluent in French, can rebuild any type of engine, is an avid cyclist, a competition-level water skier, and one of the nicest humans you will ever have the pleasure of spending time with. And his 36-inch, often multi-colored Mohawk haircut is among skiing’s most iconic symbols ever.

Glen Plake is also an encyclopedia of ski history knowledge. Turns out that the mountain-top monologue he laid on me is from the opening minutes of the 1968 film Ski the Outer Limits.

“Ballet skiing should still be around,” he says at one point. And no one bats an eye. If Glen Plake says it should, then you better believe it.”

“A must see if you call yourself a skier,” Plake assures me. Glen Plake is definitely a skier. He grew up ski racing in Lake Tahoe, California until he got fed up with the “cookie cutter” scene of organized racing at the time. The freedom of expression and style of the late-seventies Hotdoggers suited him much better. And so did skateboarding and motocross, which enabled the thrill-seeking young Plake to enjoy a little speed and excitement in the summer months. When filmmaker Greg Stump cast him in 1986s Maltese Flamingo, Glen’s spirit (and mohawk) captured the attention of an industry. Extreme skiing had its first true celebrity. 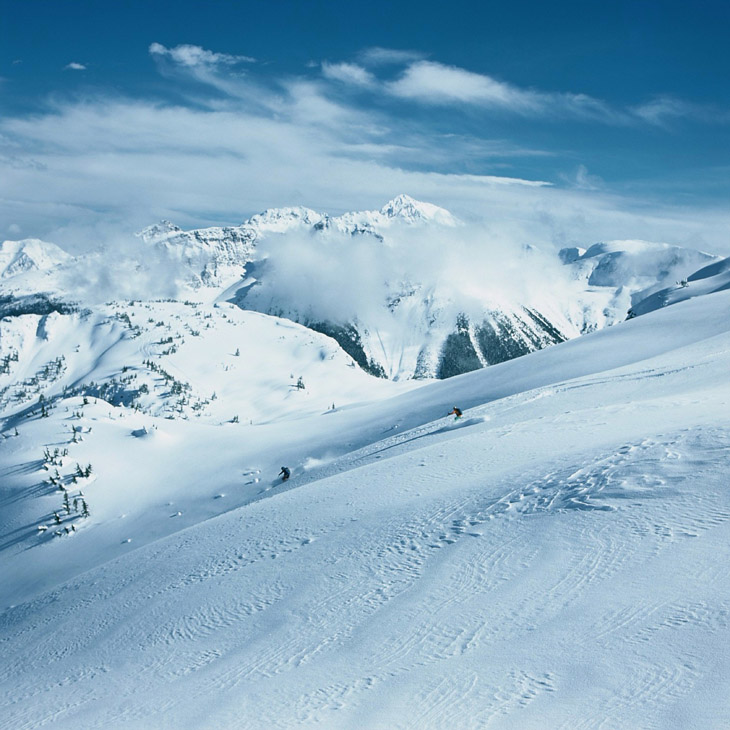 But you’d never know it to sit with him in the lodge at White Wilderness Heliskiing outside of Terrace, BC. Plake’s infectious laugh and sense of humour shines through après and dinner as he mingles with staff and guests alike while conversations flow with the wine and beer. I overhear Glen chatting with the chef about a certain type of pastry he is familiar with and asking about different cooking styles. A guest wants to know about the Elan skis Glen is testing and he spends 20 minutes explaining details of the production process and why they use the materials and shapes he has designed. After that, he’s speaking with a couple of the guides about mountain travel techniques. He listens intently, constantly learning from and respecting others.

Plake breaks the silence with the distinctive, contagious laugh I’ve already gotten used to from the ride in. Then a diamond in his tooth (I’m not even kidding) catches the sun and blinds me. What a dick! What a beauty.

After dinner, he discusses geothermal heat systems with me, explaining the one he planned out and installed at his ranch property in Nevada a few years back. We also discuss his home in Chamonix, his favourite spot on the Baja and the last time he was in the Himalaya. Seriously?! I thought Glen Plake was the coolest person on the planet when I was a kid; as an adult I’m not even sure he’s human.

“Ballet skiing should still be around,” he says at one point. And no one bats an eye. If Glen Plake says it should, then you better believe it. 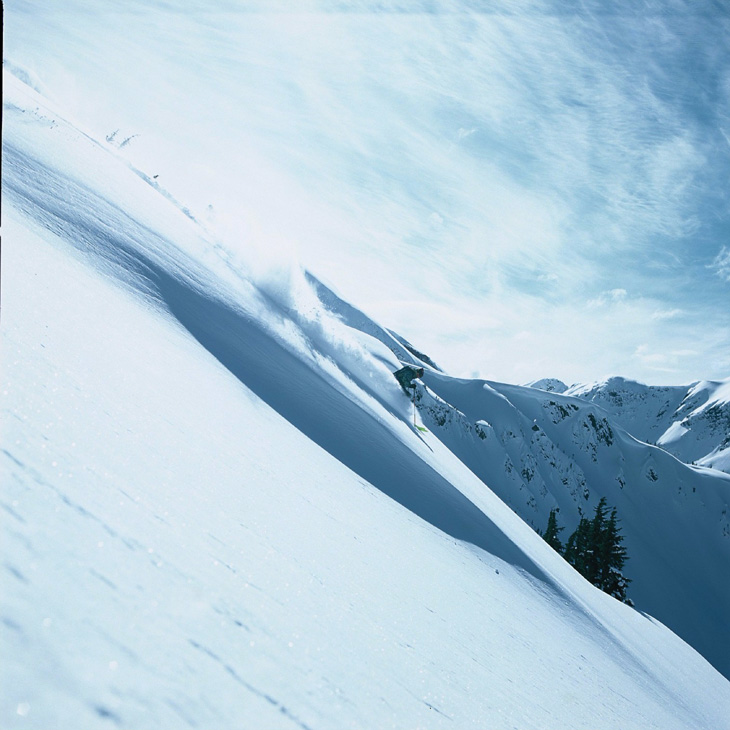 The next day we rip more pow (White Wilderness is on to a good thing up there) and I’m still in awe to be skiing with the master of stoke whose pictures once adorned my high school locker door. Now, having the chance to ski with him, joke around with him, learn from him, witness him interact and add value to everyone that he spent time with that week, is simply a mind-blowing experience. Glen Plake is the epitome of what a professional athlete should be, at any age.

“I’m just another link in the chain,” he says when I ask him about the evolution of freeskiing and his pioneering ‘extreme’ days. “But all my childhood dreams have come true.” By the end of the week, so have a lot of mine.