Every good hero has an origin myth; something that demystifies their past. And if there’s anything the art of storytelling has taught us, it’s that those myths don’t necessarily have to be factual. Not that this one isn’t, but as of now it’s unconfirmed…

The details are loose on Whistler filmmaker Leo Hoorn’s origin story, but it goes something like this: as a teenager, Leo was invited on a trip to film some snowboarders hitting handrails across Northern BC. On one particular day, the crew found a worthy feature, but the athletes were blowing it—no one was landing anything. Apparently Leo, without a word, clipped his camera into the tripod, strapped into one of the athlete’s snowboards and frontside board-slid the entire rail on his first try. Instead of going home with nothing, he salvaged the day himself.

Of course, a decade later, Leo doesn’t quite recall that moment, nor does he seem that impressed with his own origin myth. “I don’t know if I did anything to make that trip productive,” he says. “I think I just wanted to be snowboarding.”

When pressed about his roots, Leo talks about borrowing a camera from the local skate shop in his hometown of Smithers, BC and learning how to use it by filming his friends. He also mentions finishing high school a semester early and hightailing it to Whistler the very next day (via Rossland). The handrail story is never mentioned again.

“Being an action sports cinematographer is by nature an act of humility,” says Dave Mossop, principal director of Sherpas Cinema and, in theory at least, Leo’s boss. “Basically it’s saying, ‘I’ll carry a heavier bag and sacrifice some of my run so that you can look rad.’”

Standing at about five feet six inches and weighing in around 140 pounds, Leo possesses what Mossop calls, “elf-like physical abilities” and a calculated-but-fearless approach to the mountains, on either side of the lens.

“As I was learning how to film, my love for skateboarding and snowboarding was also growing, but my body started getting beat up,” Leo explains. “There were more doors and paths opening up on the filming end of things so I just started to kinda transition, not even necessarily consciously.”

“The mentors have become the mentored. Leo teaches me every day: about life, about art and about filmmaking. It’s the best.” – Dave Mossop

Which isn’t to say he can’t still ride with the professionals. Last spring, on a film expedition in the Rockies for Tourism Alberta, Leo had to film skiers Johnny Collinson and Ian McIntosh climbing and skiing The Sickle, a terminally exposed face at the back of Lake Louise.

“Leo’s a super capable snowboarder,” McIntosh says, “but he was the only snowboarder in the crew and also the smallest guy with the biggest pack. And to access The Sickle you have to traverse out onto this steep face over several hundred feet of exposure, and everything was covered in ice runnels because it had been really warm and had frozen solid overnight.”

“For us, on skis, it was a pretty puckering situation,” McIntosh continues, “and we got to a point where we all started thinking ‘what about Leo?’…

But then out of the darkness Leo appears with his crampons already on and a big smile on his face, totally unfazed.”

After nailing the shots, Leo dropped into the same face the athletes did, a line that very few snowboarders have done before and even fewer have done with $60,000 of camera gear on their backs.

“I think the funniest part of the story is that he’s the ultimate maximizer of his time,” laughs McIntosh. “He actually managed to scratch himself into a tinder date the night before we went into the mountains.”

McIntosh and Leo had worked together before. While filming for Sherpas Cinema’s Into The Mind, they embarked on an expedition to Denali, the highest peak in North America. With temperatures dropping as low as minus 40 degrees Celsius after sunset, the athletes were forced to retreat to the cook tent and huddle for warmth. “But Leo would be out in the night somewhere shooting a time-lapse,” Ian says. “Eating and being warm and all those other things that we put so much value on, those are all secondary to him when it comes to getting sick shots and getting the job done.”

“He carries a big load,” says Callum Pettit, professional skier and one of Leo’s best friends. “It’s like he carries himself on his back.”

Pettit would know. He was one of three skiers who accompanied Leo on his directorial debut for Sherpas Cinema, a 6,000-kilometre ski journey (by train) from one side of Russia to the next, that became the film The Great Siberian Traverse. The final product was a 30-minute film that earned rave reviews.

But what the audience didn’t see was Leo hanging out the window of a train going full speed, filming the barren landscape while being held in place by a local, cigarette-smoking cook.

“Leo also ended up filling the roles of DP, Field Producer, Writer and Editor,” adds Mossop with obvious pride. “Just look at the film, pretty damn decent for a first kick at the can.”

Leo attributes a lot of his prowess to the mentorship he’s received from Sherpas. And while his co-workers are some of the most award-winning filmmakers in action sports, they’re starting to see their relationship with Leo a little differently.

“The mentors have become the mentored,” explains Mossop. “Leo teaches me every day: about life, about art and about filmmaking. It’s the best.”

It’s hard to believe that the kid sitting across from me, a 26-year-old skate rat from Smithers, BC, was recently in Beirut filming a commercial for a local telephone network.

Completely self-taught when he was hired by Sherpas in 2011, Leo quickly amassed a base of knowledge that now sees him transitioning from backcountry filmmaker to Director of Photography on commercial shoots.

“The commercial scene was extremely intimidating when we first got into it,” says Mossop. “Usually over 100 people on set with huge budgets, accompanied by huge pressure from clients. I’m still amazed at how confident he has become heading into these big jobs.”

Mossop explains that they would originally hire DPs from LA and Leo would take a more secondary filming role. But then they realized that Leo was the one getting all the best shots and the finished commercials contained mostly his work. “So now it’s all Leo.”

“When you’re doing backcountry filmmaking you have to be so efficient with everything,” Leo explains to me when we finally connect for a shred day in Whistler. “It’s kind of a microcosm of a commercial shoot in a sense.”

To start our day on the mountain, Leo picks me up around 11:30 a.m. in an early-2000s black BMW sedan stuffed to the ceiling with an unwieldy amount of camera gear. A onewheeled, motorized skateboard contraption rolls around behind the driver’s seat. Leo’s been using it as a camera dolly, a throwback to his roots and his DIY filming style that’s characterized by intimate, moving shots.

After bashing some technical pillow lines (Leo’s style is to beach himself atop lines few would even consider and then leave a trail of detonated pillows in his wake), we load the Whistler gondy and reflect on his year. In the

past 12 months, he has visited El Salvador, Japan, the US, Brazil, Northern Labrador, Alaska, the Canadian Rockies and Lebanon.

It’s hard to believe that the kid sitting across from me, a 26-year-old skate rat from Smithers, BC, was recently in Beirut filming a commercial for a local telephone network. He’s certainly made sacrifices to get where he is. But the “Lou Dog’’ has a smile that just won’t stop shining.

“Travelling to exotic locations and snowboarding down an amazing run somewhere like Greenland really was my childhood dream,” he says. “But I guess I just kinda feel like I accomplished my childhood dream in a slightly different way.”

I never do find out if his barstool origin myth is real or not. But it’s cool to see that Leo’s accomplishments are creating a mythology all their own. Though I can’t help but be curious, on this day of pleasure shredding without any cameras around, why he’s still wearing such a massive pack. 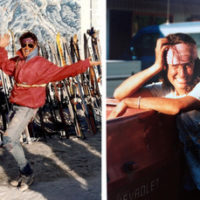 MOUNTAIN LIFER: WENDY BROOKBANK HELPED LAUNCH WOMEN’S FREESKIING
As a 19-year-old skier, she discovered the meaning of life: Ditch the gates, charge hard, make movies, have fun—and never get an indoor job. Twenty-five years and two kids later, the creed still serves her well. When Wendy Brookbank quit ski racing, she figured that was it—no more free pairs of skis. How was she to know, at 19, that she was about to become one of freeskiing’s founding women? Trained as a ski racer back east since she was 10, Wendy recalls an early trip out West… Read more 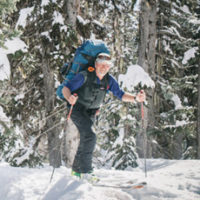 MOUNTAIN LIFER: MITCH SULKERS, BRINGING OUTDOOR EDUCATION TO THE COAST MOUNTAINS FOR OVER TWO DECADES
“I’m an outside kind of person,” says Mitch Sulkers, a veteran schoolteacher at Whistler Secondary and creator of its highly regarded Outdoor Recreational Leadership program that brings students up into the Coast Mountains backcountry or out kayaking on the Pacific Ocean. “Most of us can learn in different ways, but outside is where we are meant to be,” Mitch says. To be able to stick your fingers, toes and hands into it…nothing facilitates learning like being involved and active.”… Read more