The clamour of hammer drills bounces and reverberates off the sheer rock walls of North Vancouver’s Seymour River Canyon and into the thick rainforest canopy. Down below, workers scurry like ants in high-vis work vests as they haul bright yellow air hoses and air drills beneath an immense rock scar where a 200-foot buttress once leaned out over the river. 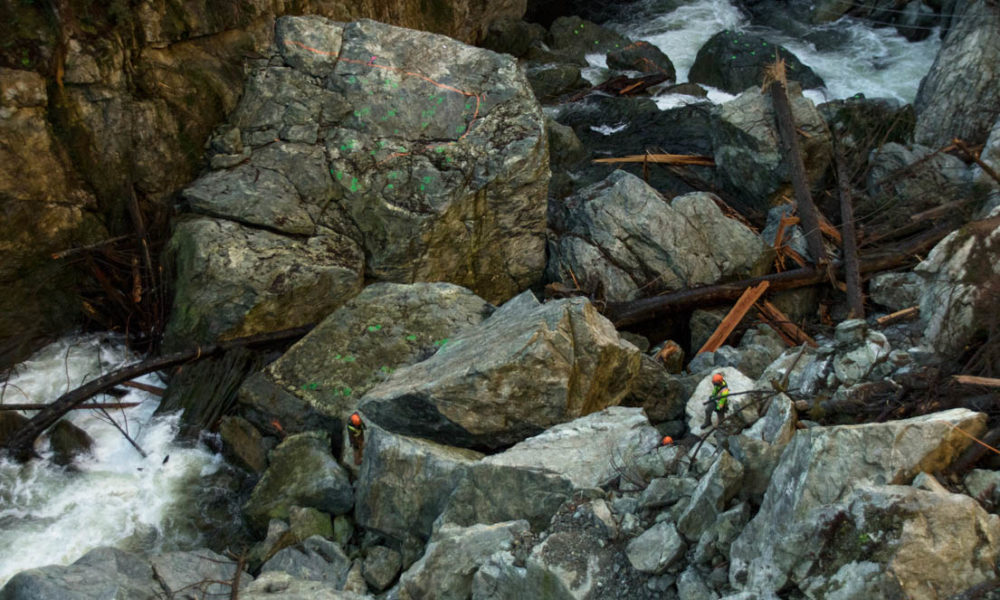 That buttress, over 50,000 cubic metres of rock, came crashing down on December seventh, 2014 and filled the Seymour Canyon with debris, effectively blocking passage for anything except the persistent flow of water. This is not ideal for the salmon downstream from the slide, or the Seymour Fish Hatchery.

Built in 1977, the hatchery was erected to counteract the deficit observed in the salmon population following construction of the Seymour Falls Dam. A decade later, after initial funding began to dissolve, the Seymour Salmonid Society (SSS) was established by a dedicated group of volunteers wanting to take over operations of the hatchery.

As informal stewards of the waterway, Brian Smith, manager of the SSS, and his team were left to the task of getting the ball rolling and undoing a massive geological event. Over 80,000 fish (Steelhead and Coho) have 100 per cent of their spawning habitat above the rockslide.

“We were looking at losing the entire Steelhead population by 2019 and only remnants of Coho would remain.”

“If nothing is done, a lot of them will die as a pre-spawn mortality,” explains Brian. “They will leave the system entirely, looking for a new location to spawn, or they’ll try to spawn below the slide where the habitat can’t support it. We were looking at losing the entire Steelhead population by 2019 and only remnants of Coho would remain.”

When he first arrived on site and saw the effects of the slide, Smith remembers feeling his heart sink. “This was more than a problem, at the moment all I could think was; something has to be done. But what? And how?”

The first step was organizing a round table involving all concerned parties; stakeholders in the health of the salmon run. This collective was comprised of members of the District of North Vancouver, the City of North Vancouver, Metro Vancouver, Department of Fisheries and Oceans, and the BC Provincial Government, as well as two First Nations Bands – the Skwxwu7mesh (Squamish) and the Tsleil-Waututh (SLAY-wah-tooth) – whose territory the Seymour River passes through. 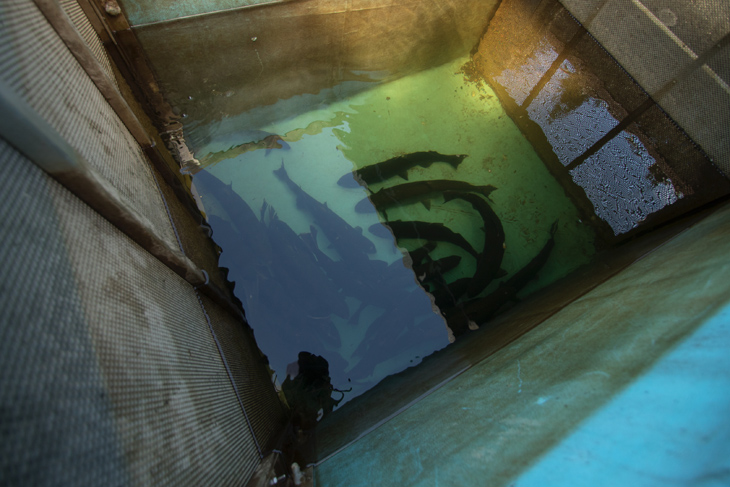 “We all came together and formed a partnership,” Smith says, “with our one goal being to reintroduce migration passage through the Seymour Canyon for adults and juvenile salmon alike.”

Northwest Hydraulic Consultants Ltd. was brought in to advise on possible next steps. They brought nine options to the round table and by the end of the discussion the members had agreed on using a low-velocity rockbreaking product to reduce the size of the debris, allowing the natural flow of the river to disperse and reshape the waterway. Those worker ants in the box canyon are operating 45-pound pneumatic hammer drills that average about 2,200 blows per minute at 90 PSI (that’s the equivalent to drilling a hole the height and width of a stop sign post in about an hour).

“A continuous circuit of yellow blasting wire leads out of the canyon to a safe zone and the high-vis ants scurry over the boulders, evacuating the canyon while salmon jump in the waters below the slide, excited and impatient to continue upstream.”

Transporting equipment like that over flat ground is a laborious task in itself. To get them down a cliff and over the debris to the toe of the slide requires a web of ropes, pulleys and expertise to ensure safety. To properly clear the debris will require $1.2 million over five years and the not-for-profit SSS (with it’s humble staff of three full time employees and one seasonal aid) are expected to raise the money, on top of the regular duties of maintaining the hatchery. For the past two years, Brian Smith’s life has been bound in the shackles of bureaucracy and fundraising. It seems the fate of the Seymour salmon is now hinged on the countless emails and funding proposals of one man.

But in the canyon, progress. A Global Rock Works Inc. team has lowered, loaded, packed, and wired together charges and sand in preparation for a blast. A continuous circuit of yellow blasting wire leads out of the canyon to a safe zone and the high-vis ants scurry over the boulders, evacuating the canyon while salmon jump in the waters below the slide, excited and impatient to continue upstream.

A few moments later, an air horn sounds 12 times in short succession, a two-minute warning. Then, with a pop, gasses ignite and seek weaknesses in the rock. Smoke rises from the canyon and three truck-sized boulders crumble into piles of rubble. But behind them, a few dozen more sit unmoved and indifferent. The salmon will have to be patient with us.

For more info or to donate go to seymoursalmon.com