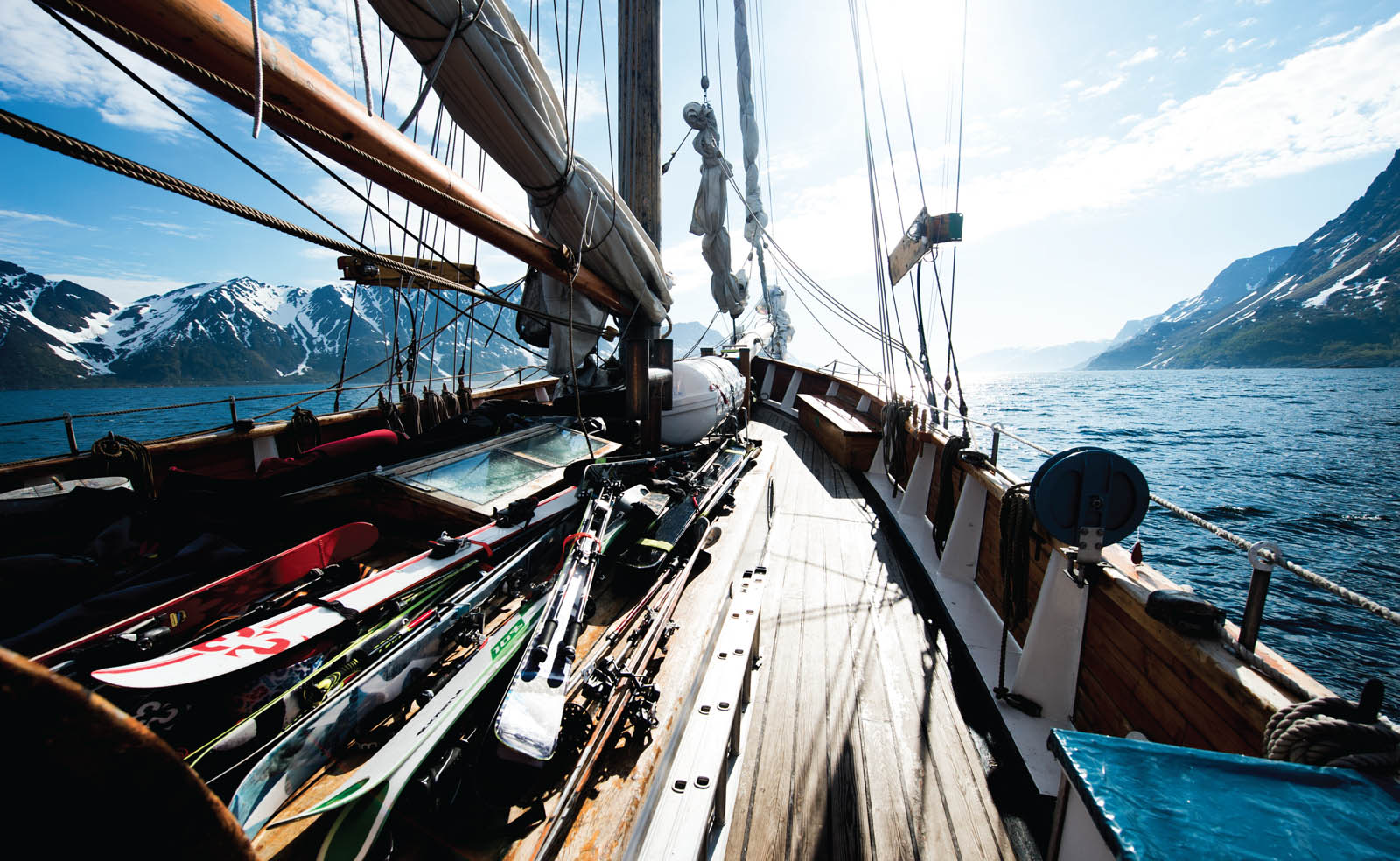 Wielding an engraved silver ladle, Captain Charles Wara dredged homemade leek soup from an 18th century ceramic tureen. The skiers noisily slurping seconds around a thick wooden table in his ship’s mess hadn’t left him much, but Charles was still grateful for a share—if only to fund the energy required to cook dinner. Later, around 9 p.m. (no one would know for sure as the sun never really set) Charles would whip up some reinskav, a traditional Sami stew of sautéed reindeer meat. Afterward, we’d all lounge on deck in a spell of bluebird warmth unprecedented for late May at 70˚N above the Arctic Circle. We’d watch dolphins and condor-sized sea eagles, count the silver-thread waterfalls lining the fjord, spin maps in sunburned hands and point to ski lines on the horizon. And though it was only Day One on the boat, and most were Norway veterans who’d often plumbed this land of mountainous grandeur in winter, we’d all entertained the same thought: this is the best trip ever.

While most in the Northern Hemisphere are done with skiing by May, Norway’s second season is just beginning, and its airports bustle with people dragging ski bags to the likes of Lofoten, Lyngen or Sunnmøre, no small number of whom would be heading off on boat/ski trips like the one that found us slurping Captain Charles’ soup.

In our first 24 hours on Goxsheim we climbed and skied all day, and then, anchored in a pretty fjord, made a post-dinner tour in midnight sun, with above-freezing temps, copper light, and genuinely amazing turns that ended at the water’s edge. We’d do it all again the next day. And the next. For a week in fact, and never in the same place twice. Most would be map-in-hand exploration, the daily theme an eight-hour tour and single 1,000-metre descent from a nameless summit in perfect weather.

“It can’t get any better,” we would say. And then the next day it would do just that—better terrain, better snow, better everything.

“The plan is to go to Norway…” I’ve lost track of the number of times over the years I heard this via phone or email from my friend, Swedish photographer, Mattias Fredriksson. But every time I do, I get pretty excited. As a result of numerous trips made in his company, I’ve been fortunate not only to experience the depth and breadth of skiing along the western spine of this stridently alpine nation, but also through his lens afterward.

One of the world’s most celebrated outdoor photographers, Fredriksson has spent considerable time exploring the almost endless ski possibilities in “the cradle of skiing,” one of the planet’s most mountainous countries, and whose 100,000 kilometres of convoluted coastline rank it seventh in the world.

On assignment from Songdal to Stranda, Lyngen to Lofoten, Narvik, Finnmark and everywhere between, working with film companies and on his own, Fredriksson has captured the Norwegian ski experience and its relationship to life along the fjords like no other shooter. Along the way he has photographed the stalwart locals who hold the keys to their kingdom—from ski makers, to binding and head-lamp innovators, captains, guides, tour operators and others searching for environmentally sustainable ways to move their art and craft to the cutting edge in a tradition-bound country. As much as his photos show us about the land, they also capture the stories that he is only too happy to share, as these captions attest.

Mattias Fredriksson’s photography can be found in pretty much any magazine in the world devoted to skiing or mountain biking. He and his partner Elle live in Åre, Sweden, with a husky named Tikaani who has 8,000 Instagram followers. mattiasfredriksson.com

Mountain Life Annual is a once-a-year visual and journalistic ode to the intersection of planet Earth and its people. Designed to appeal to the outdoor lover, regardless of age or activity level, MLA employs ideas, art, thoughtful words, and exceptional photography to go beyond the bravado of adventure, highlighting the social, cultural, political and environmental contexts behind many of our endeavours. By engaging the outdoor state of mind over its physical dimension, Mountain Life Annual values inspiration over aspiration… Read it online or subscribe now.