So a guy walks into a bar. Across the bar he sees a girl getting grabbed by another dude, but before he can step in to do anything, the girl takes control—she slaps the groper in the face. Hard.

Impressed, the guy walks over to ask if everything is alright. She says it is. He says, “you should hit him again.” And she does.

And with that, an extremely Canadian romance begins in Whistler. Twenty-three years later, Jill Dunnigan and Peter Smart are still in Whistler, still together, and have somehow turned their love of the mountains and ski bumming into a successful business. Since 1994, Extremely Canadian has offered steep skiing clinics, private instruction, backcountry adventures, and Avalanche Skills Training courses in Whistler, plus guided ski trips around the world. Of course, like any good marital endeavour, Extremely Canadian was launched in exasperation.

“Jill got tired of hearing me talk about it,” Pete says of the idea to offer high-adventure guided mountain tours at the height of the “extreme skiing” era. “She told me to put up or shut up…”

“I told him, I can organize stuff, you can ski. Why not us?” adds Jill.

But from those humble beginnings over 20 years ago, Extremely Canadian has grown to become Whistler’s most recognizable guiding company, employing a small army of about 65 guides, instructors and office staff to share the love of mountains with guests from all over the globe.

“We’ve surrounded ourselves with a team of people we really like,” says Jill. “We get some great resumes—some have degrees and some are high school dropouts—but we also look for people who have interesting experiences or a unique outlook on life. It’s important to have someone interesting to talk to on the chairlift.”

While the idea of a business that essentially lets guests enjoy the real glory of Whistler powder seems like a no brainer in 2016, the early days of Extremely Canadian were anything but a sure thing.

Greg Dobbin, who was standing next to Pete when he watched Jill punch that groper, was the original third partner in the company. Work was fun but sporadic, and profits were low, but the trio soldiered on. One way to increase profits was to cut overhead, so after returning from their honeymoon in 1996, Pete and Jill lived in a tent in the Cal-Cheak campground for a while. “It wasn’t bad for a summer,” Jill recalls, “but we had a bear who kept coming into camp. One night he was curiously circling the tent for a long time and we couldn’t get out. Our escape vehicle was a 1961 MGA convertible with an old choke that needed quite a bit of time to warm up… so no escape really.”

“Every morning I’d wake up in the camper, pull on my skirt, pantyhose and high heels and walk across the dirt parking lot to the office.” – Jill Dunnigan

Eventually Peter confronted the bear and it ran away. Looking for more suitable digs, the newlyweds moved into ski legend (and first ever Extremely Canadian guide), Wendy Brookbank’s camper in Whistler’s fabled parking lot 4. “It was nice because it really shortened our commute,” Jill says. “Pete was swinging a hammer, roofing and I was working for the Whistler Resort Association in media relations. Every morning I’d wake up in the camper, pull on my skirt, pantyhose and high heels and walk across the dirt parking lot to the office. And no one there ever knew. By winter, we had found a place in Pemby. The camping just got too cold and wet, even for us.”

Extremely Canadian started out on Blackcomb, but Pete, Jill and Greg decided early on that the best way to showcase the real Whistler was to give clients a day on each mountain. This cost them twice as much to operate, however (paying a percentage to each resort), and by the end of their third winter of operation, things looked a bit bleak.

Then the merger happened. While there were multiple guiding companies operating in Whistler during the 1990s, most operated on either Blackcomb or Whistler, but not both. When Blackcomb and Whistler merged into one super resort in early 1997, Extremely Canadian suddenly had a competitive advantage.

“The three of us worked all season long and at the end there was $3,300 for us. So we went to Sushi Village, bought a jumbo sake, got drunk, spent $300 and split the rest.”

“All those suits came in and analyzed the on mountain business,” remembers Jill. The new, unified resort trimmed a lot of fat and streamlined operations. Guiding companies that didn’t operate on both hills were the first to go. “There were 18 other independent operators at the time and we were the only one left standing,” Jill says. “So we looked really smart, but it was dumb luck.”

At around the same time, the now infamous Extremely Canadian promo parties were born. Jill and Pete had always thought outside the box for promotions and rather than rent an expensive booth at ski shows, they would pay the $12 entrance fee and hang little paper flyers in the bathrooms and above the ketchup at the hot dog stand. Instead of industry schmoozing at conferences, they opted to throw a party in Whistler.

It started out as a talent show—What Would You Do to Win a Pair of Rossignol Skis—and over the years, as the prizes got bigger (heli ski trips, gear, etc.), the talents got raunchier and raunchier. “I don’t remember anybody ever having a fantastic talent,” notes Jill. 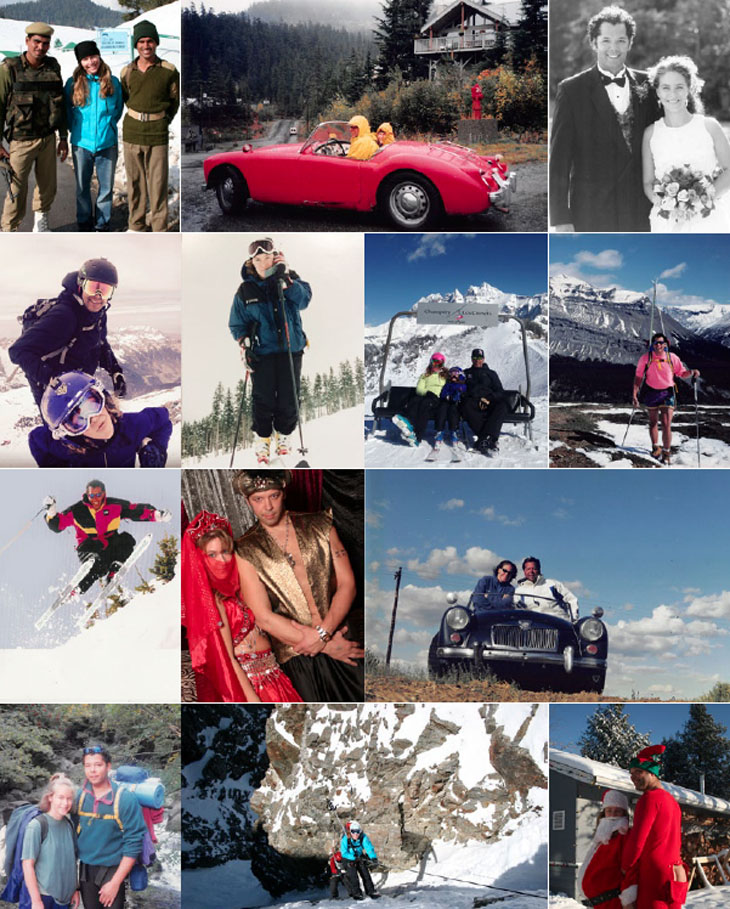 “We were thinking about doing an anniversary party,” Pete says. “It was originally called Funk Night, then Pimp & Ho, then Freaker’s Ball,” Peter says. “We just wanted to get weird, but then it got bigger than us and people didn’t even know whose party they were at. The parties were fun for a while, but there started to be too many rules. No hot tubs on the patio and naked limbo at the same time. No more naked Johnny Thrash! It just wasn’t fun anymore.”

Older, wiser and more mature, the Extremely Canadian parties are a thing of the past these days, but Pete and Jill continue to run the business (they bought Greg out in 1998) with that same old rebel spirit, and a new recruit—their seven-year-old daughter, Allie.

“She makes it fun for us,” Jill beams. “She’s always super stoked.” Allie skis with Pete on the hill and helps with everything from checking groups in to handing out T-shirts at après.

Both Jill and Pete admit to saying, “I’d fire you if I wasn’t married to you” multiple times over the history of their company.

Jill recalls organizing a guided trip for 26 people to ski Courmayeur, France from her hospital bed while learning to breastfeed. It’s literally in Allie’s blood. “She’s proud of [the business] and we’re that much more connected to it because of her enthusiasm.”

Hopefully Allie’s enthusiasm will inspire her ski bum parents for a few more years to come. Pete says he’s excited for the Spearhead Huts system to go in and the return of scheduled Snowboard Freeride Camps (Extremely Canadian originally offered snowboard camps back in the 95/96 season).

Preparing for their twenty-third year working together in the mountains, both Jill and Pete admit to saying, “I’d fire you if I wasn’t married to you” multiple times over the history of their company. “But you keep working through it and figure out ways to communicate,” Pete says. “And set rules. On the drive home to Squamish we are allowed to talk about work until we can see the Tantalus Range. After that, no more work talk.”

And how do Pete and Jill sum up their career, spanning two decades of 100-day-plus ski seasons? “We’re just a fun bunch of hosers to go skiing with,” Jill laughs. “When we started, I asked Pete how long we were going to do this and he said, “I dunno, maybe three to five years?”

As their slogan suggests, “Redefine Your Boundaries.”