Born and raised on a hobby farm in B.C.’s Pemberton Valley, Austin Ross quickly fell in love with the mountains. Under the craggy peaks of Mt. Currie, his tight knit family instilled in him a deep desire to explore the natural world, embrace creativity and follow his own path.

That path has since led Austin down the road of professional skiing, allowing him the freedom to seek out steep lines, climb mountains and even fly off them. We recently caught up with Austin for Last Col.

Last great piece of advice you received?
I lost my wallet recently and I recalled what my dad always told me as a youngster when I would misplace something. He’d say, “Stop looking for it, and you will find it.” I always applied the saying to losing material possessions but as I’ve grown older, I’ve realized that the same can be said about anything you desire in life, if you stop worrying about trying to find it then eventually it’ll present itself in one form or another.

Last climb that challenged you?
Last week I went for a ski tour up the Duffy with my paraglider and I cut it really close with daylight hours. The climb itself was relatively straight forward and the travel was easy due to good snow conditions, but by the time I got to my top out, laid out my wing and attempted to take off it was well after sunset and the landing zone in the valley below was steadily disappearing into the black abyss. After one botched launch attempt I decided to do the old “stuff and run.” I packed my wing, put on my headlamp and skied a long avalanche path back down to the road in the dark. In flying, there’s a saying that goes “it’s better to be on the ground wanting to be in the air than to be in the air wanting to be on the ground.” This was one of those times.

Last time you laughed so hard you cried?
If you get me and Kye Petersen going after a couple beers it’s an almost guarantee I’ll laugh till my eyes water. We bring that out in each other. It’s just the way it is.

Last thing your sister taught you?
My sister has taught me so much in life. I watched her get married up at Tyax Lodge this past summer and it was such an incredible experience. She and her husband Jon are artists and they created just about every aspect of the wedding themselves. It was really inspiring. She taught me that day that with a little creativity and hard work, no task is impossible. Thanks, Amy.

Last piece of lost skiing gear you wish you still had?
I had a second transceiver that I kept in my truck just in case anyone forgets one and somehow I misplaced it along with a VHF radio when I was in Revy last winter. Both items are easily replaceable, but it was a bit annoying not knowing how they disappeared.

Last time you felt buyers’ remorse?
After shoulder surgery this past May, I decided to invest in some new music gear. I found a decent deal on a Les Paul online and once it arrived at my house I realized it wasn’t the guitar for me. Instruments need to speak to you and this one just didn’t. I learned my lesson and went down to Vancouver when Fender discontinued their American Standard series and spent a few hours testing guitars until I decided on a rosewood Telecaster that I can’t put down.

Last time you milked a cow?
I grew up on five acres on the Lillooet River in Pemberton. We didn’t have any cows but we did have chickens, a whole gang of cats and dogs over the years, a rabbit that didn’t last too long and a blind horse named Mokey who could escape any sort of fence Dad would put up.

Last time you did a shot-ski?
It was either at Snowwater last winter or maybe during POWDER week in Montana. I can’t really recall.

Last time you were really scared in the mountains:
The last time I felt like I was losing control on the variables was during a hike and fly mission on Mt. Currie. We climbed the West face and the wind was blowing the wrong direction to launch safely. My partner and I decided to try and traverse the skyline over to the East ridge but after passing the entrance to the Y Couloir it became evident that continuing wouldn’t be safe.

Columns the size of microwaves were pealing off with as much as a flick of the finger.

The mountain is one big volcanic pile of choss. Columns the size of microwaves were pealing off with as much as a flick of the finger. We were traveling sans cord so after a quick discussion we carefully re-traced our steps back to the West face and waited for the winds to change. When I did get in the air finally, it was one of the most peaceful and relaxing flights I’d ever experienced.

Last time something completely surprised you?
I skied into a decent sized cliff at Retallack last week and decided to send. Once I was airborne I realized it was bigger than I had expected. Everything was fine until I stomped and much to my surprise the landing was a whole lot flatter than it looked from the takeoff point. Hey, it happens…

Last picture you framed?
My dad gave me a poster that hung on the wall in his shop when I was a kid. It’s a classic shot of JM Boivin skiing the first descent of the Col De Peuterey on the South Face of Mont Blanc, circa 1977. I had it reframed and it lives on my wall now. Thanks, Dad!

Last time you did something outside your comfort zone?
I took a ride with someone who probably had a few too many awhile back and I was definitely outside of my comfort zone. If you’re hitching, make sure you pay close attention to the person who picks you up.

If you’re hitching, make sure you pay close attention to the person who picks you up.

Last book you read?
“It’s a Long Story: My Life” by Willie Nelson. Music biographies are my faves.

Last time someone inspired you?
I feel like I’m constantly being inspired. That’s the beauty of living in an area that harbours so many talented folks.

Last gift you gave?
I gave my mum a Ukulele for her birthday. She has a lovely voice and was the first person I heard sing and play guitar so I thought it would be cool for her to have something she can travel with since she spends a lot of time on the Sunshine Coast during the summer. She’s already playing songs on it and they sound great.

Last thing you built with your own hands?
Just put a sled deck together for the back of my Tacoma.

Last concert you went to?
I saw Hiss Golden Messenger in Vancouver. I’ll often head down there to see live shows. It was at the Fox, which is an intimate venue and I had the chance to chat with MC from the band before he went on. They even brought Frazey Ford on for a surprise duet. What a memorable evening. 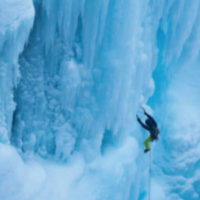 COMMIT: COLD FOCUS — ICE CLIMBING THE FJORDS OF NORWAY
The new video from Arc’teryx and filmmaker Cameron Sylvester documents climber Luka Lindic‘s ascent of the ice fjords in Norway. “With the limited beta we’d been given, we had set our eyes on a very specific objective. Located beside the Kafjord Suspension bridge lies a huge waterfall that attracts big crowds in the summer months. With the right conditions, it can freeze over in the winter, producing a massive icefall over 120 meters tall, pocketed with multiple ice caverns; potentially epic conditions for ice climbing…. Read more