Heliskiing conjures up many misconceptions. It’s easy to think it’s all about extreme terrain laid out to be slashed and charged hard by pro level powder hounds, or ultra posh lodges reserved for the über affluent. There are many falsehoods that steer the average mountain lover from taking the plunge.

With this in mind, we wanted set the record straight. Speaking to a discerning backcountry skier with millions of vertical feet under his baselayer, a first timer with all the apprehensive anxiety you’d expect, and a mountain guide with thousands of hours of heli experience, we set out to dispel some of the perceived barriers to heliskiing, and rightfully place this bucket list item within reach. 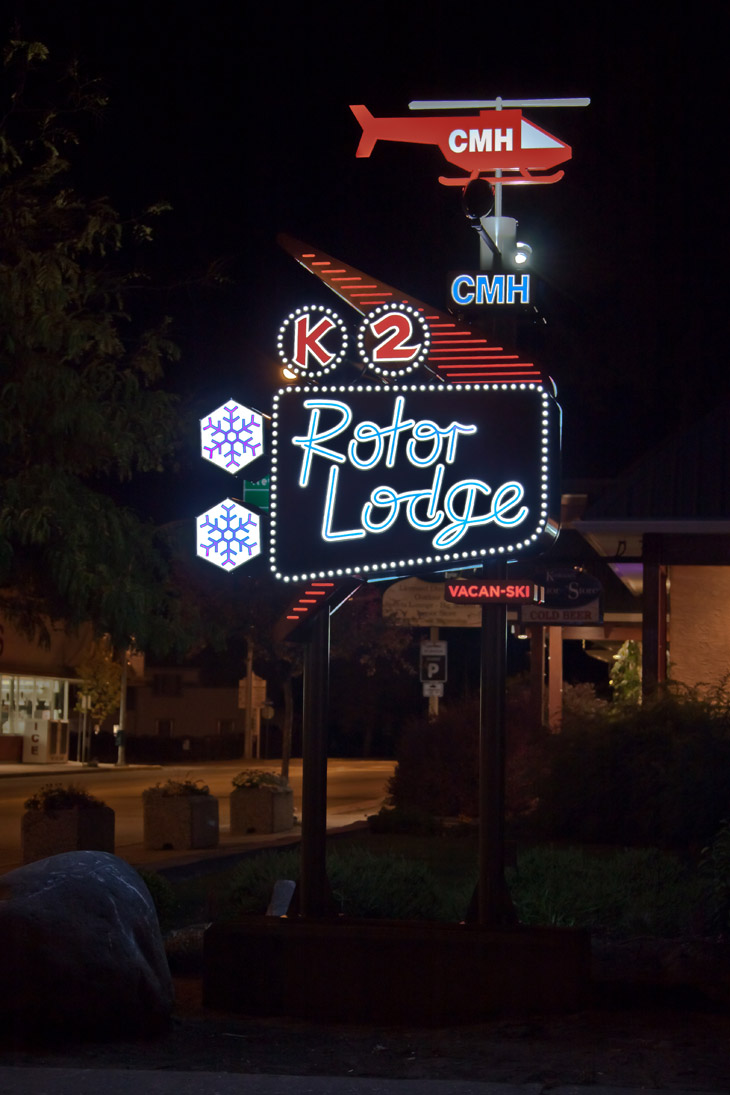 “What I like about the area is that a lot of the runs, the top half is beautiful alpine, and you finish off in the trees, it’s a good mix. The steep trees, it’s just something you don’t get in Alaska.”

Peter Macpherson, Area Manager of CMH K2, agrees that the terrain is the real draw to K2, and the variety of the tenure is well-suited for first timers as well as seasoned vets.

“I think for guys like Steve, it’s an authentic experience,” he says. “He skis a lot, and the skiing is primary for him; the accommodations are secondary. It’s a little bit of a secret stash that not a lot of people know about, and I think that’s what keeps him coming back.” 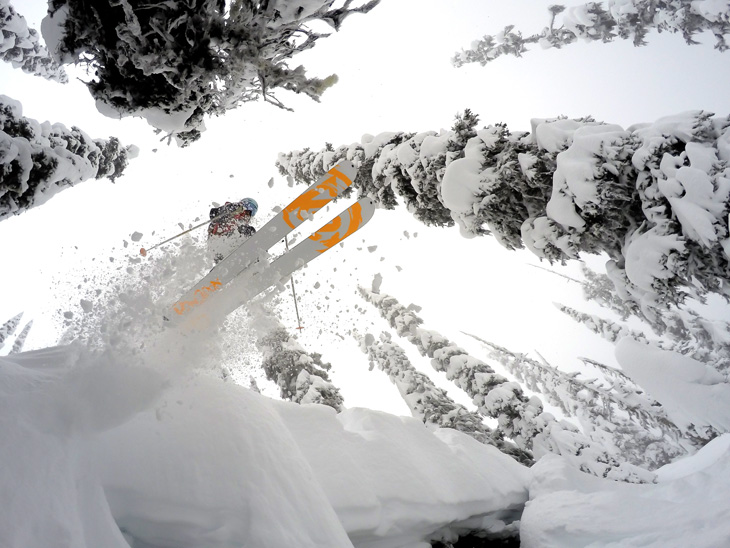 “It’s the steep, deep powder tree skiing,” he continues. “Our runs aren’t super long, which is actually an advantage, landings are about 2,200 feet and pickups are at 15,000 feet, so you’re kind of at that perfect bandwidth where you’re not way up high where you get wind effect, but you’re not too low where it’s warm and the snow gets heavy.”

Both Kruze and Macpherson agree that depending on what you’re looking for in a vacation, the terrain and conditions can easily trump the amenities, bringing the financial commitment into reach for most skiers.

While the K2 Lodge isn’t as luxe as CMH’s other lodges, it more than makes up for it in atmosphere. Based in the town of Nakusp, British Columbia, guests stay at what could be described as more of a hotel than a ritzy lodge.

“The town is a classic British Columbia mountain town,” adds Macpherson. “It has a very remote feel to it. It’s a small village, and a lot of our guests who’ve never been here before are really taking with it—that gritty mountain town vibe.”

Trudy Elder, a first time heliskier and visitor to the lodge, agrees. “It’s kinda retro; it adds to the charm. And the food is just amazing. The chef is an award-winning chef who wants to be there because he loves the skiing. The quality of the food was as good as any hoity toity restaurant I’ve ever been to, and the vibe here is really low key and chill.” 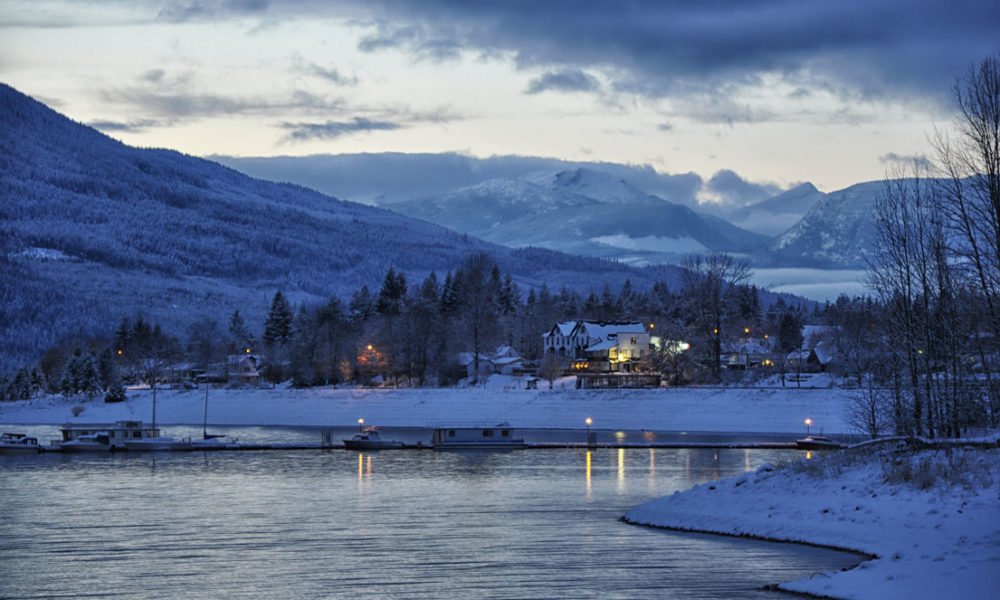 Kruze also comes for the laidback vibe, and at one point was concerned K2 would end up being sold because it wasn’t the most fancy spot on the block.

“Some remote lodges are almost over the top,” says Kruze. “This is just like a hotel in town. But to me it’s all about the skiing, it’s really all that matters, and it’s much more affordable. Plus all the staff lives in town, so I’ve gotten to know them over a 27-year period; you get to talk about each others’ kids growing up.” 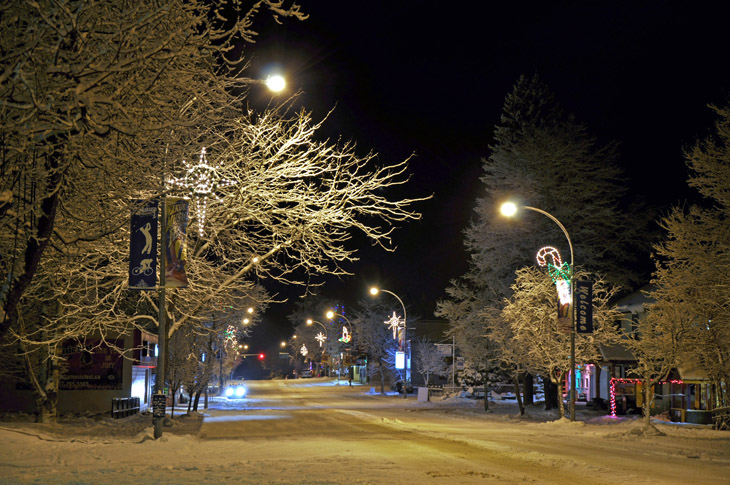 So if champagne powder sounds more exciting to you than caviar dreams, there are definitely affordable heliskiing experiences out there to explore. There are other ways to find deals as well: consider booking during shoulder seasons, explore group packages and keep a keen eye peeled for last minute openings and be able to jump on them.

Another perceived barrier that pops up when talking to almost any first timer is the fear of not being able to keep up. But the same people are quick to admit their fears of not being good enough were completely unfounded.

Elder was 47 when she recently her first heli trip last season, and while she had all the typical first timer’s apprehensions, she’s quick to point out that attitude is everything.

“I’m pretty adventurous and I fly by the seat of my pants,” she says. “They way I saw it is that if I couldn’t keep up, I could at least get to ride around in the helicopter. That was my attitude. But it snowed and snowed and snowed and there was no way I wasn’t skiing.” 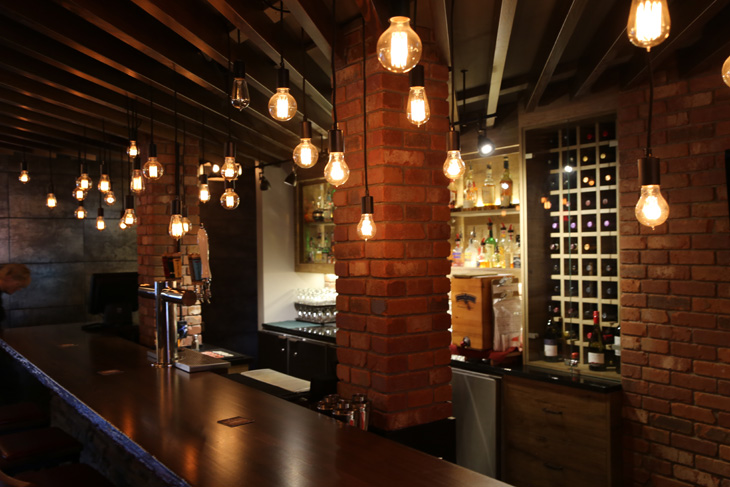 Along with the concern about not being able to keep up, is the fear of being scorned for wasting the time of the more “pro” skiers in the group.

“Of course I didn’t want to hold people back, but the people in our group and the guides were so accommodating,” says Elder, who has since become friends with her trip mates, keeping up with them through a Facebook group. “I never got the feeling once I was being rushed. There was nobody that was all hardcore or macho. I think that community of skiers, they love it and they want everyone to experience it, too. Even with the seasoned ones, I never once got the feeling I was holding any one up, or that they were upset about it.”

For Kruze, who’s introduced his fair share of newbies, sharing an epic powder day with a first timer is the icing.

“It’s always fun watching someone go through the trees for the first time, watching their eyes light up,” he says. “You’re just so lucky to be doing this at all, let alone more than once. You just can’t describe it.”

After her first heli trip, Elder is hooked. And like the community of skiers she mentions above, she now wants to share the experience with other first-timers.

“I feel like it’s attainable to more people than you think,” she says. “You know, I’m a good skier, but I wasn’t sure how I was going to do. If I were to give any advice to first timers, I would assure them, if you want to do it, do it. Don’t stop because of what other people are thinking. If it’s something that’s on your bucket list, don’t let fear stand in your way, but do your research because some areas are more challenging than others. It can be scary, but it’s so worth it in the end ” 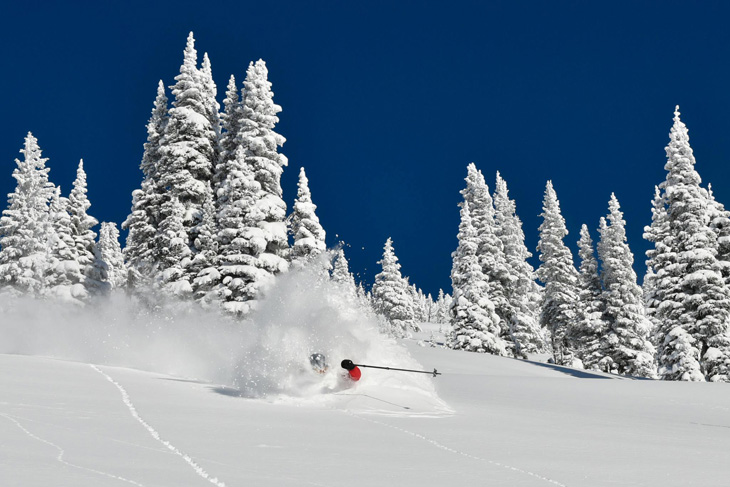 That begs the question: how good of skier do you really need to be anyway?

“You need to be comfortable skiing off trail,” says Kruze. “But if you’re passionate about skiing, you’re not going to have any trouble. The people that are worried they can’t keep up usually don’t have a problem.”

Macpherson says that about 40 percent of his guests are heliskiing virgins.

“Usually on the first run, it’s pretty exciting for them to get into a helicopter, fly to the top of the mountain and get dropped off in all this fresh snow,” he says. “It gets their adrenaline pumping, so we just try to get them to calm down and relax.”

“The feeling when you first get into the helicopter, oh my God,” says Elder. “And when you see where you’re landing, on the side of a mountain hanging off the edge of a cliff. My heart was probably beating 160 beats a minute. Adrenaline, lots of adrenaline.” 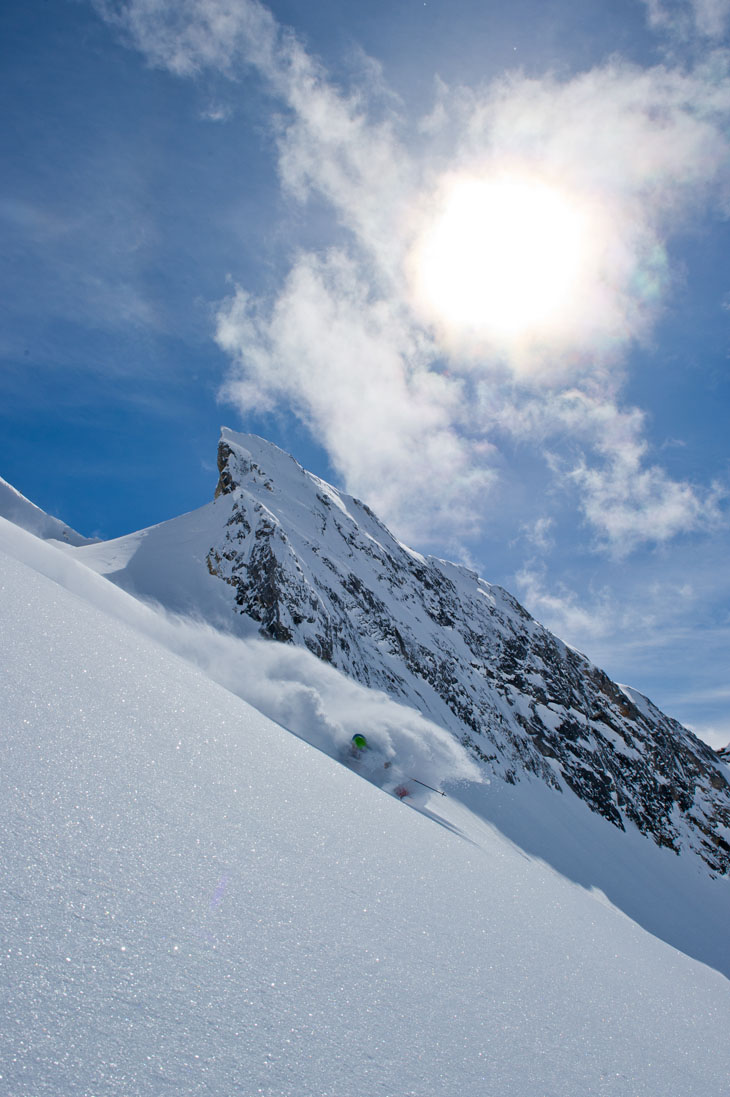 When it comes time to drop in, Macpherson starts the group off nice and slow, not only to get the crew warmed up, but also to assess the skill level of the guests.

“Everyone’s challenged the first couple runs, even the experienced skiers, until they get their feet back under them. The first run of the trip, we’re not hitting the challenging runs right off the bat. We’ll start off easy, and do some powder coaching, about balance, and staying equally weighted, and skiing as efficiently as possible so you don’t get freaked out about the forest runs. Then after that, everyone gets better every day.”

“It’s a lot of tree skiing,” she says of her skiing experience at K2. “It’s big puffy pillows you can just plow right through. I was dropping off stuff that never in a million years I thought I’d be jumping off of. I went into this with the mindset that if I had to sit out some runs that would be OK. Well, I didn’t sit out one run, and now I can’t wait to go again.”

Hopefully this trio of mountain lovers has quashed any misconceptions you might be holding tightly to about heliskiing. All that’s left is to take the plunge. Be forewarned, it’s highly addictive. 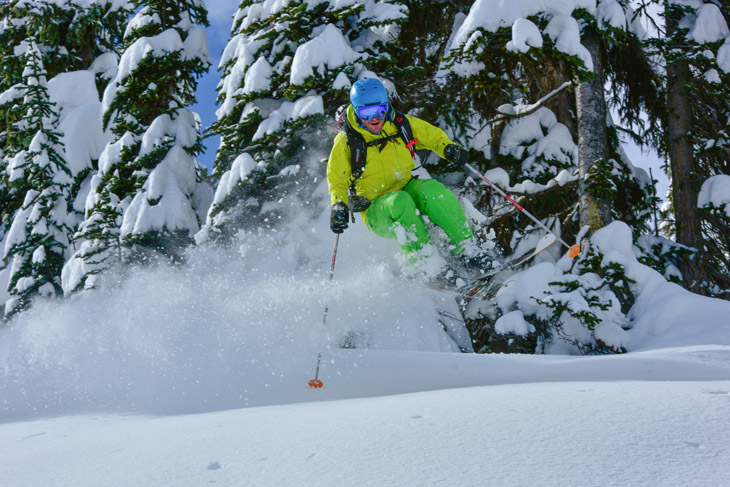 For more on CMH’s K2 Rotor Lodge, check out: https://www.canadianmountainholidays.com/our-lodges/cmh-k2/ 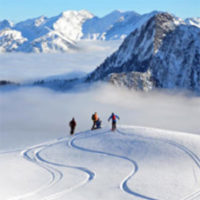 ‘HEARTBEATS: STORIES OF THE DEEP WEST’ PAINTS A PICTURE OF PASSION
‘Heartbeats: Stories of the Deep West’ is more than just a promo reel; it reveals the CMH experience through the lens of its people, peeling back the layers of the unique characters that pump life into CMH, and sheds light on the joys of sharing this incredible place… Watch video