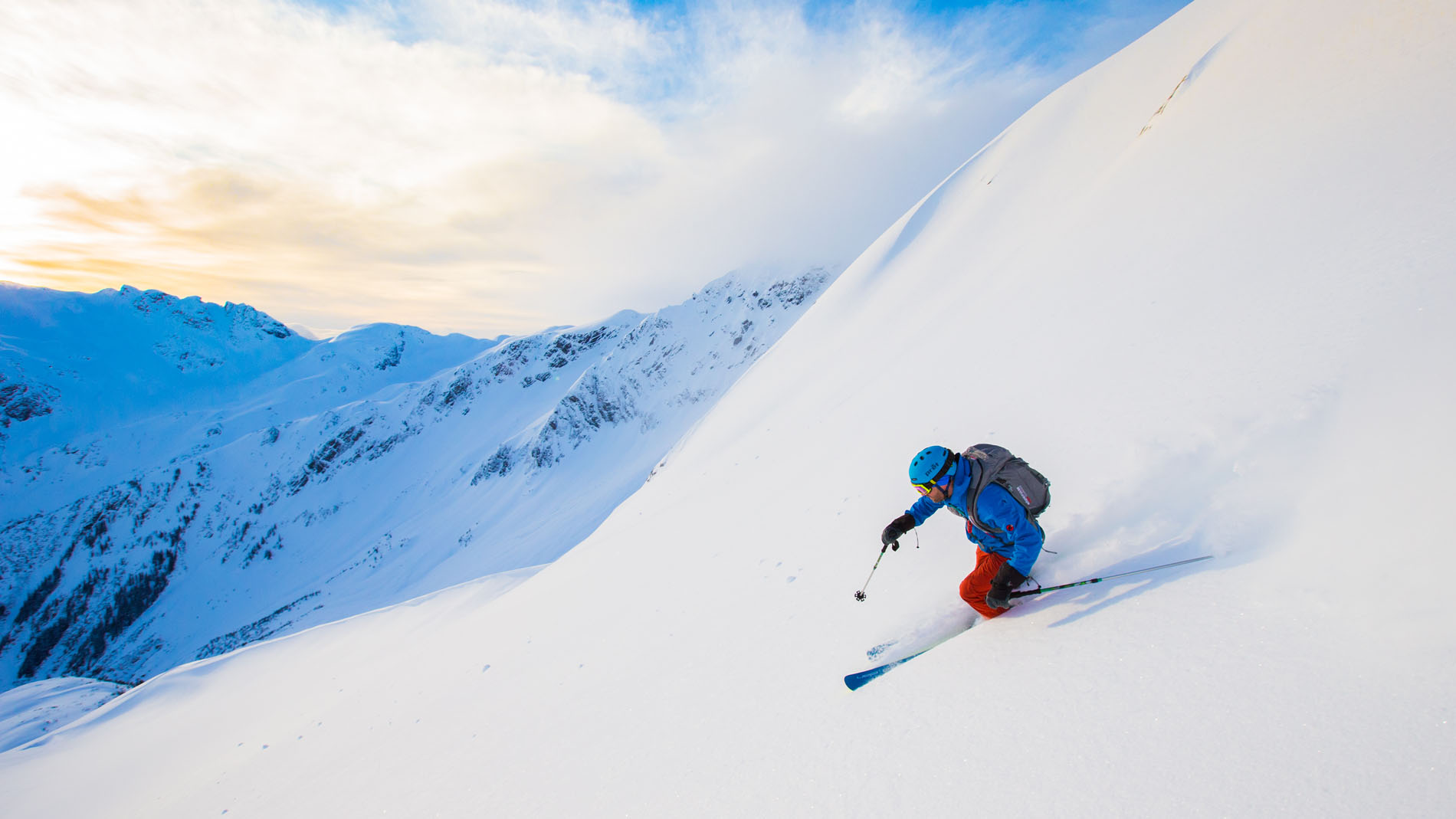 Endless Lines: Going Way Beyond the Tracks in Terrace, BC

The skin-track Brad Zeerip just set is absolutely heinous. Switchbacking up 35 degrees of icy suncrust; the transitions from travelling right to left are an acrobatic feat that world champion ballet skiers would scoff at. From below I see him stumble ever so briefly. And then as I follow upwards, because there’s no other way out of here, I watch Kyle Easby, Greg Sturch and Adam Burk also struggle for their lives every time they need to switch direction. And then it’s my turn. I’m a sweaty mess of Gore-Tex and burning quads and I fight with everything I have not to fall backwards. If I do fall, I’ll need to start again; because we need to get over the Dome to ski home. It’s an epic battle that, after some of my hackiest skinning ever, using trees, hands, and even my knees a couple times, I eventually win. I know Zeerip was messing with us. I imagine him thinking to himself, “Let’s see what these Ontario boys can do!”

And once on top, as the wind cools my overheating, sweaty body, I start shivering and reflect on the day so far: Today we skied for free. Well, maybe not technically, because we’ll need to gorge on calories later to replace the multiple-thousands we lost. We set off with Brad at 2500 feet, we skinned up past the not-running two-seater chairlift (Shames Mountain is only open Thursday through Monday and today is Wednesday), then up past the one T-bar, and into the backcountry. We didn’t stop climbing until we reached 4500 feet and looked down on an epic ridge revealing endless lines into the bowl behind Shames. And there were no tracks anywhere.

Zeerip has been here for decades and soon sniffed out the best snow. When he drops in, it comes with an ongoing commentary: “low-light alert, low-light alert, good snow, good snow… “ And eventually, if everything lines up and he finds good snow, it’s a “woop woop” like any other normal human being.

He showed us some incredibly beautiful spots, and while the skiing wasn’t as epic as we dreamed it would be, it was still fantastic. This place after a good dump would be absolutely jaw-dropping.

We came to Terrace, BC, to ski. And it’s a good thing too; because why else would you come here? As a town, Terrace isn’t much. Born from the logging industry, there’s little in the way of nightlife. But the restaurants are surprisingly awesome (perhaps we were just famished after burning calories all day) and the people are incredibly friendly. Everyone wanted to share their town with us. But it wasn’t the town that we came for. We came for the mountains. And thankfully they’re everywhere.

“There’s a lifetime of lines up here,” says Zeerip.

Shames Mountain Co-Op is literally owned by the townspeople for the townspeople. And it’s a beautiful place: there’s one two-person chairlift, and one T-Bar. That’s it. There’s no village at the base trying to sell you frilly underwear, electric gloves or iPad cables. Everyone that is here is here to ski. And isn’t that the way it should be? If you want to venture beyond the ski boundaries, you’ll need to be prepared to work for it. And most locals are.

On our second day of skiing at Shames it costs us $52 for a lift ticket and we arrived just as Brad was getting out of his truck.

“Nice timing!” he yelled over to us. “Come tour with us.”

“Well, we’re going to go up, see what’s going on up there, and hopefully, find some good snow.”

So the same plan as every day?

And that’s precisely what we did. We knocked 1400 feet off our climb by riding the two-person chairlift up to the T-Bar, then taking that up to backcountry. Then Brad dragged us up and over 5000 more feet of terrain that day. We skied the Dark Side, and multiple other aspects, finding pockets of fresh powder where we could. It was an amazing day. Brad took it easy on us, and at 56 years old, we can only hope to be as fit as him at his age. We were wiped.

The next day we went from skiing on a budget, to the exact opposite: heliskiing at White Wilderness Lodge. 2016 was the first year of the lodge’s existence and they’re creating what they call a “boutique” heliski operation, priding themselves on small groups, unlimited vertical and free drinks at the lodge. All perks that we support. With 1500 square kilometres of tenure, we took off in the morning in the Astar helicopter, the Airwolf theme song on repeat in our minds, our quads ecstatic not to be earning turns that day. 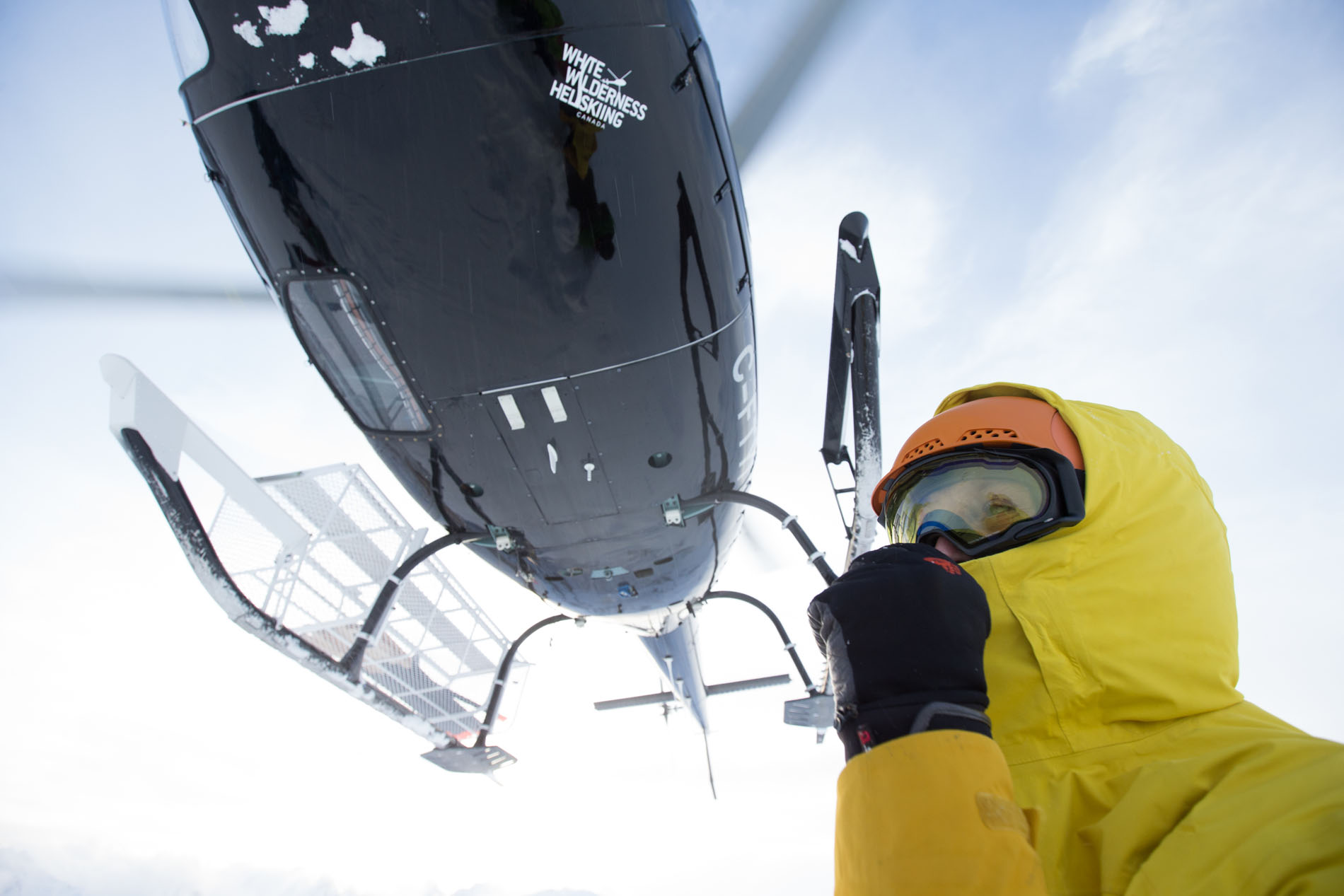 We spent two days with White Wilderness exploring their tenure and absolutely loving the experience. Fine dining, outdoor hot tubs and beautiful mountain scenery were all a perk, but it was the absolute last run that I will remember forever.

General Manager Ken Bibby joined us that day, and took us to a peak that had never been skied before. He kept calling it the Mountain Life Run. And no BS, I wept during those final turns. It was early morning and the world was simply too beautiful to withstand. Hoar frost glistened off the snow, the white peaks spread out in every direction. It was so freaking beautiful. And to top it off, the snow was perfect. Every single minute of our last seven days in Terrace culminated in this one perfect run. As one single tear rolled down my goggle-clad cheek, I realized it contained all the friends, both new and old, that helped me get here.

“Thank you world for making this place so damn beautiful and the people here so damn open,” I thought to myself. “And thank you for letting me experience this incredible place.”

If you’re looking for a ski holiday, one where skiing is the focus, then look no further than Terrace, BC. You won’t be disappointed.